US life with COVID-19: A state-by-state patchwork of rules 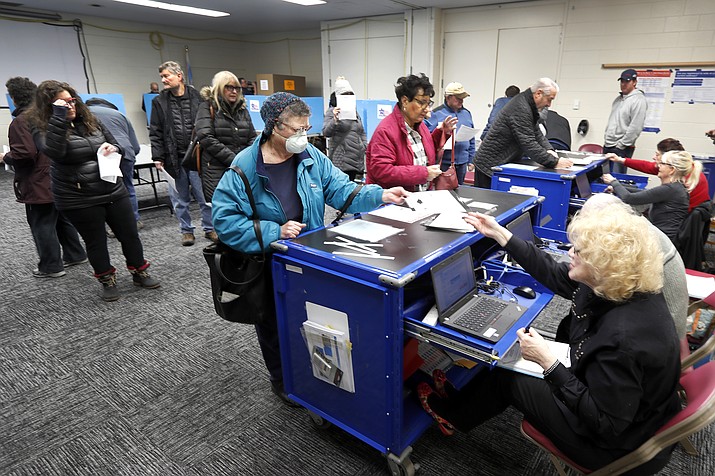 Poll workers over age of 60

This interactive map shows the percentage of poll workers over the age of 60 across all states.

As the nation struggles to reconcile itself to a new and spreading peril, it also struggles with a patchwork of rules that vary dizzyingly from place to place: For now, your life and lockdown in the shadow of COVID-19 depends on where you live.

In some places, many ordinary Americans are making public health choices, searching their own conscience and deciding for themselves what risk they’re willing to endure. In others, government has made at least some of those decisions.

Ohio canceled its presidential primary to avoid crowds, but the polls opened Tuesday morning in Florida, Illinois and Arizona. Bars in some states prepared for hordes of St. Patrick’s Day revelers, while elsewhere others are stacking the stools up on tables and locking the doors.

Casinos in some states have shut down, yet others remain open, where hundreds or even thousands of people touch the same slot machines and gambling chips. Spring breakers are partying by the hundreds on some beaches, while police are sweeping others, ordering people away through loud speakers.

The federal government on Monday urged Americans not to gather in groups of 10 or more and asked older people to stay home, as the number of infections in the U.S. climbed to more than 4,500, with at least 88 deaths. But hard rules have been left up to the states, creating what New York Gov. Andrew Cuomo derided as a “hodgepodge."

She could close her restaurant, potentially putting herself out of business and rendering her 25 employees unemployed. Or she could stay open, risking their health and that of their customers, many of them old friends and regulars, who’d suddenly stopped shaking hands on their way in and started instead making nervous jokes about preferring tables in the virus-free section.

“It’s been lurking in the room, weighing heavily on us: what is the right answer, what is the right thing to do?” she said. Then Michigan announced Monday afternoon that all bars and restaurants must close to dine-in customers: “I’m relieved that the decision was made for us,” Dykstra said.

Even as some states made stunning announcements — 7 million people in the San Francisco area were put on a near-total lock-down — life carried on in others.

Jade Noble looked out from behind her Phoenix bar, Linger Longer Lounge, packed with people. They were mostly young, but she imagined them all going home to older, more vulnerable relatives and neighbors. She watched one person walk up to the water cooler and put the mouth of their bottle right up to the spigot.

“We need less people in here,” she thought this weekend. She considered the guidance from the Centers for Disease Control, begging people to stay away from each other to flatten the curve — the exponential spread of the virus. “We need to take ourselves out of that equation,” she decided. So the Linger Longer Lounge closed its doors, despite no mandate from the state or city.

In Oklahoma, Scott Wagoner, the co-owner of a furniture store in Oklahoma City, also decided to shut down his store, despite not being ordered by the state to do so. Most of his employees, he said, are parents and grandparents, and he felt they could do their part to stop the spread.

“It’s a very tough decision, people’s lives and livelihoods are at stake,” said Gareth O’Sullivan, who owns a pub called Mac McGee in Decatur, Georgia, also among the states that has not yet instituted a statewide rule.

Mac McGee has been awaiting word from authorities. In the meantime, tables and bar stools have been spread 6 feet apart. Employees are wearing gloves and obsessively sanitizing every surface. But as the death toll ticked up and warnings became more dire, O'Sullivan began to feel like some parts of this were totally out of his control. The crowd is starting to thin, he said, as reality sank in.

If the government doesn’t weigh in soon, he’ll probably close on his own. The stress, he said, is becoming too much to bear.

While Ohio postponed its election, other states were opening the polls, with an assortment of methods to try keeping voters safe.

Officials in Cook County, Illinois, encourage poll workers to use blue painter’s tape to to mark the floor every six feet so voters can keep their distance while waiting in line. In Florida, Orange County Election Supervisor Bill Cowles said voters are being allowed to bring wipes to clean their voting booths, face masks and their own pens to mark their ballots. Poll workers have been given supplies to wipe down counters.

Nick Campbell, went with his wife and their 11-year-old daughter to vote in the Tampa suburb of Riverview, armed with masks and gloves. But when they saw there were no other voters, they opted to don only the gloves. They were in and out within minutes.

“I didn’t touch anything. It was a very sterile operation,” he said.

But others chose to stay away.

Jonathan Castoire, a Broward County telecommunications engineer, said he couldn't vote Tuesday because he has multiple sclerosis and his voting station is in a senior center. He felt that would be too dangerous. He said he feels like he has been given "an ultimatum" to choose between his health and his right to vote. "That's not right," he said.

“Why would I get sick at the beach? I'm not going to be touching anything,” said 46-year-old David Zimmer of Richmond, Minnesota, as he joined a group of family and friends flip-flopping their way to a beach that police had driven through just an hour before to empty it out. Other tourists heeded the warnings and shuffled back to their hotels, many carrying take-out meals before locking themselves in.

As state after state on Monday announced they'd be shutting movie theaters, bars, restaurants museums and all non-essential business, others were still preparing for a party.

In Savannah, Georgia, bar owner Jessica Walden said she was trying to just break even with far fewer customers that she’s used to during St. Patrick’s Day celebrations. City officials this year canceled the city’s massive parade, but allowed bars and restaurants to remain open.

Walden, who co-owns Bay Street Blues with her mother, said few weekend guests seemed concerned about the pandemic. The bar’s Saturday crowd reached a capacity of 144 patrons several times. They had hand sanitizer posted in two spots on the bar and at the front door, and other than people pumping copious amounts into their palms, the party seemed to go on uninterrupted. Closing down during the most lucrative week of the year would crippled her business, she said, and she’s not that worried.

“I just at this time don’t have any concerns,” she said. “Maybe I’m naive. Everybody keeps saying it’s like the flu.”

But in places where the government has mandated closures, residents seemed resigned to waiting it out inside. In Louisville, Kentucky, people bought wine by the case.

Hours after the governor announced all bars and restaurants would close at 5 p.m. Monday, Danny Flanigan and Jennie Mulhall scrapped their plans to eat fast food in the car. They opted instead for lunch at their favorite restaurant, the Bristol.

“We want to support you one more time while we still can,” he told the hostess as they walked inside. Flanigan and Mulhall said that over the last week, they have been trying to live some abridged version of their normal lives. He’s a musician and played a small show over the weekend, and it felt different, like people were aware it would be the last hurrah for awhile.

“In times like this, everything else takes a backseat to being alive,” Flanigan said. Maybe six months from now, we’ll all laugh and say ‘oh, remember all that stuff we couldn’t do when we were stuck inside.’ But we won’t be laughing if we don’t take these precautions and people die.”