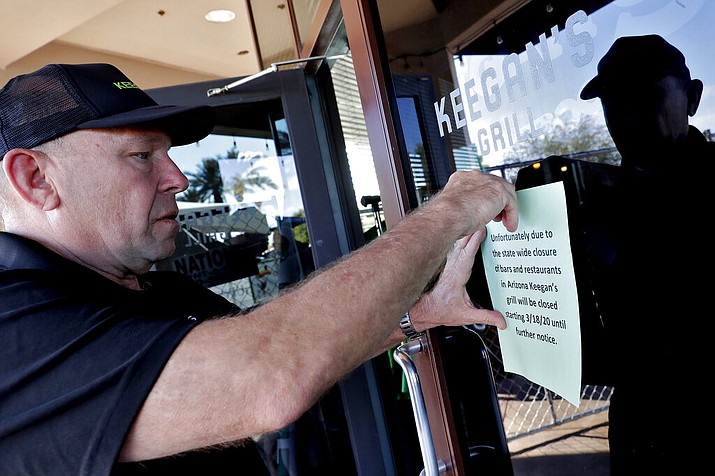 Owner Steve Johnson attaches a notice on the door of Keegan's Grill Tuesday, March 17, 2020, in Phoenix notifying guests his restaurant will closing in compliance with the state of emergency issued by the city of Phoenix earlier in the day that restaurants only serve take-out. Phoenix, Tucson and Flagstaff have ordered bars, gyms and other indoor facilities to close immediately and restaurants to offer to-go service only in an effort to slow the spread of the coronavirus. (AP Photo/Matt York)

Declaring a State of Emergency in @CityofPhoenixAZ wasn’t made lightly. However, our medical professionals need all the help they can get & closing bars and moving restaurants to take-out/delivery/drive-thru helps #StopTheSpread. The health of our community comes first. #COVID19 pic.twitter.com/3fudErodYQ

PHOENIX — Phoenix and Tucson joined Flagstaff on Tuesday in ordering bars, gyms and other indoor facilities to close immediately and restaurants to offer to-go service only in an effort to slow the spread of the coronavirus.

Annie DeGraw, a spokesperson for Phoenix Mayor Kate Gallego, said the declaration affecting restaurants and bars will go into effect tonight.The other details of the state of emergency will be ratified by the Council tomorrow. The declaration will likely be broader and will include restrictions on other public gatherings, DeGraw said.

Restaurants were given until 8 p.m. to convert to drive-thru, delivery or pick-up only, the mayors of Phoenix and Tucson said, a day after Flagstaff's mayor was the first to make the decision with an official proclamation. The Phoenix suburb of Mesa also followed suit. 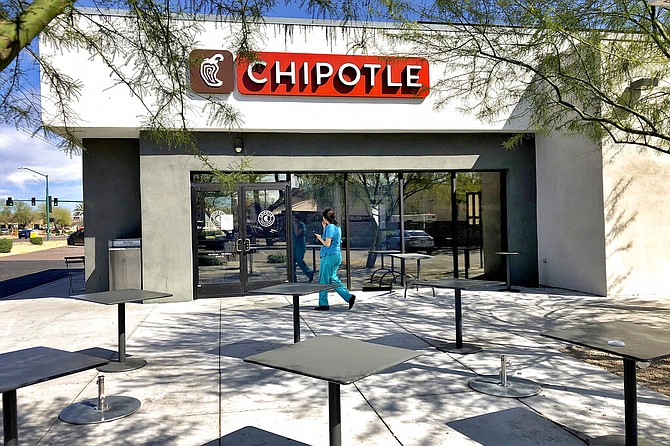 Chairs have been removed from an outdoor patio as a guest arrives for take-out at a restaurant Tuesday, March 17, 2020, in Phoenix. Phoenix, Tucson and Flagstaff are ordering bars, gyms and other indoor facilities to close immediately and restaurants to offer to-go service only in an effort to slow the spread of the coronavirus. (AP Photo/Matt York)

Numerous restaurant and bar owners in Phoenix and Tucson had already closed or converted to take-out and delivery operations. Essential businesses like grocery stores, pharmacies, food banks and airports remain open across Arizona.

The closures came as state health officials identified three more coronavirus cases, including the first two on the Arizona portion of the Navajo reservation in Navajo County.

The Navajo Department of Health said late Tuesday that the second individual is a middle-age man from the same region as the first person who tested positive within the Kayenta IHS Service Area.

They said the second man had had recent travel history and reported the symptoms to the Kayenta Health Center and was taken to a hospital off the Navajo Nation for testing.

Health and emergency officials were isolating the second man's family members and trying to determine the extent of the relationship of the two cases.

The Navajo Nation, a sovereign tribal government, already had declared an emergency on the reservation, closed tribal parks and limited travel for tribal employees. On Tuesday, the tribe announced it will close its casinos — one east of Flagstaff and three in New Mexico — until April 6.

"We have health and emergency experts who have been planning and preparing for this situation for several weeks," Navajo President Jonathan Nez said in a statement.

Arizona now has 21 cases, the rest of which are in the lower half of the state across Maricopa, Pima, Pinal and Graham counties.

Republican Gov. Doug Ducey has shut down schools statewide but didn't extend the order to businesses. 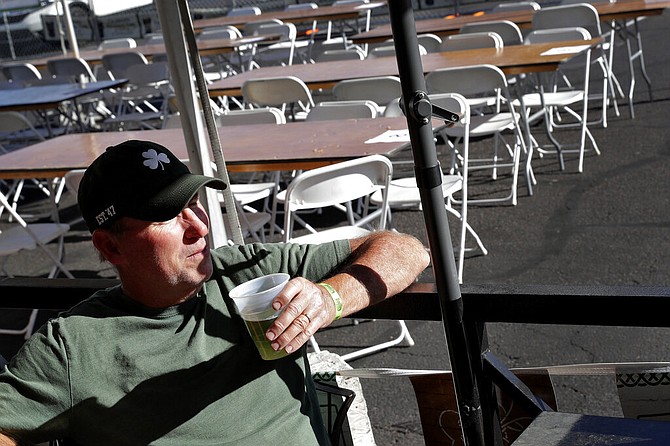 Tim Coghlin drinks a green beer amongst empty tables set up for St. Patrick's Day outside Keegan's Grill Tuesday, March 17, 2020, in Phoenix. The Irish-themed restaurant notified guests that it will close at 8 p.m. in compliance with the state of emergency issued by the city of Phoenix earlier in the day that restaurants only serve take-out. Phoenix, Tucson and Flagstaff have ordered bars, gyms and other indoor facilities to close immediately and restaurants to offer to-go service only in an effort to slow the spread of the coronavirus. (AP Photo/Matt York)

"The governor has chosen to take a different approach," Sinema said in a call with health care providers. "But I am working directly with mayors and county governments."

The Arizona Department of Health Services issued new guidance Tuesday that "strongly recommends" dining establishments discourage dine-in visitors in Maricopa, Pinal and Pima counties, the areas with known person-to-person transmission of the virus. But Ducey and his administration have so far stopped short of issuing a statewide or regional order for closure.

"We're not at that point," Ducey said Monday.

Flagstaff, a mountainous city of about 70,000, is enforcing the order on businesses beginning at 8 p.m. Mayor Coral Evans announced the decision late Monday after she declared a state of emergency.

At wine and beer shop Vino Loco in downtown Flagstaff, chairs already were up on the tables in anticipation of closing. A sign outside said it would offer bottle sales only on Wednesday, but it was unclear when it could reopen. 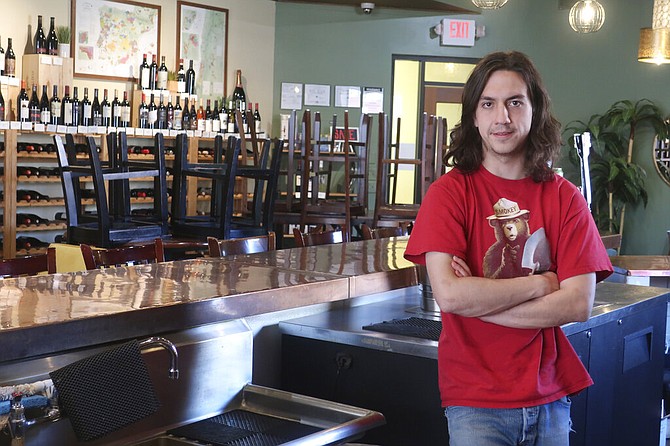 Guillermo Camacho speaks about the closure of a wine shop where he works in Flagstaff, Ariz., Tuesday, March 17, 2020. The mayor of Flagstaff ordered restrictions on restaurants and the closure of other businesses in a bid to stop the spread of the new coronavirus. (AP Photo/Felicia Fonseca)

"It looks as though it was impending," said Guillermo Camacho, who has worked there for three years. "We're just feeling it out to see what we can do."

Camacho said he has enough money in his savings to get him through a couple of weeks, but others in the city might not be as fortunate.

No coronavirus cases have been reported from Flagstaff and Coconino County, which is about 140 miles (225 kilometers) north of Phoenix. Evans said the proclamation was necessary "for the protection of life and property." It will be in effect until April 1.

The Arizona-based supermarket chain Bashas', which also owns Food City and AJ's Fine Foods, announced stores would open an hour early for shoppers age 65 and older only starting Wednesday. Customers will be permitted to bring one caretaker if needed.

Near Tucson, several airlines have started to park planes at the Pinal Airpark amid travel restrictions and declining demand, the Arizona Daily Star reported.

Ten Delta jets landed Monday at the airpark used mainly to store older jets so their parts can be removed. Another 13 aircraft from the Atlanta-based airline were scheduled to arrive at the storage and maintenance facility Wednesday, according to air traffic website FlightAware. It was unclear how long the jets will stay, unused.

For most people, the coronavirus causes only mild or moderate symptoms, such as fever and cough. For some, especially older adults and people with existing health problems, it can cause more severe illness, including pneumonia.

The vast majority of people recover from the virus. According to the World Health Organization, people with mild illness recover in about two weeks, while those with more severe illness may take three to six weeks to recover.

Based on input from healthcare professionals, business leaders,& community members, PHX is declaring a state of emergency forcing immediate closure of bars & moving restaurants to delivery/take-out/drive-thru only starting 8PM tonight. @cityoftucson joins us in this. #COVID19