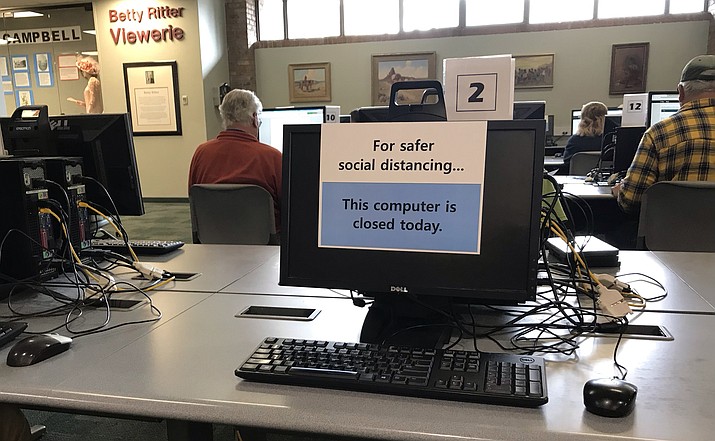 The Prescott Public Library has taken significant steps in an effort to prevent the spread of COVID-19. (Courier photo)

Prescott City Council business will move to an online format, and the Prescott Public Library will largely shut down for nearly a month — all due to ongoing concerns about COVID-19.

Although the bulk of the city’s coming virus-related actions will be made public during a 4 p.m. Tuesday, March 17, press conference at Prescott City Hall, the city announced several actions on Monday. Among those is the decision by the city to go virtual for its City Council meetings.

Prescott Community Outreach Manager John Heiney said the city would have a system for allowing citizens to fill out comment cards for the virtual meetings, but no one will be allowed to attend the meetings in person.

In addition, nonessential meetings of all other city boards and commissions will be canceled temporarily.

Except for the curbside services, the library will remain closed until at least Monday, April 13 — at which time the situation will be reevaluated, according to a news release from the city.

“Although currently there have been no diagnosed COVID-19 cases in Yavapai County, this action is being taken as a precautionary measure because your safety and well-being is the City of Prescott’s primary concern,” states the news release.

For additional information on the ongoing COVID-19 situation, the city has gathered sources on its website at: http://www.prescott-az.gov/city-management/communications/covid-19/.

“Thank you for your patience as we continue to monitor this situation and make decisions with an interest in keeping our community safe,” the news release added. 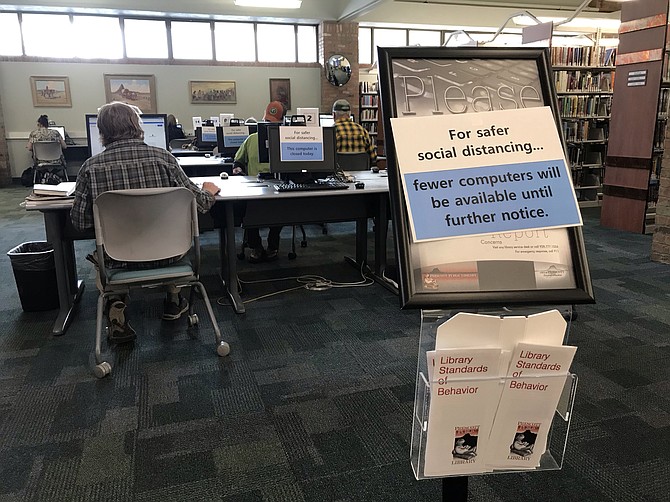 The Prescott Public Library has taken significant steps in an effort to prevent the spread of COVID-19. (Courier photo)

Among the impacts to the library are:

• All library programs have been canceled through Monday, April 13.

• Meeting rooms will be unavailable through April 13, and the public will not be able to make future reservations during this time. “Again, watch for updates closer to April 13,” says the news release.

• Beginning Tuesday, March 17, the Ask a Librarian Desk will be available for phone calls and email to answer questions about tax forms, Census 2020, COVID-19 updates and general reference questions. The hours are: Tuesday through Saturday, 10 a.m. to 6 p.m.

• Library patrons will be able to access the online resources continually which include: eBooks, eMagazines, streaming video, eAudiobooks and all kinds of information resources from our website: www.prescottlibrary.info.

“For most online resources, you will need a library card number and a PIN,” said the news release. More information is available by calling 928-777-1526.

• Beginning Friday, March 20, the library will begin offering curbside service from the parking lot at the corner of Marina and Goodwin streets. The hours are: Tuesday through Saturday, 10 a.m. to 6 p.m.

• For the curbside service, library patrons will be able to place holds online at: https://catalog.yln.info/client/en_US/ppl, or call the Ask a Librarian Desk at 928-777-1526.

• Patrons will be notified in the same way as if you were coming in the library (by email, text, phone or mail).

• Patrons should bring their ID or library card and “pull into any parking space in the parking lot and a staff member will greet you and ask your name,” states the news release.

• Staff will check out holds and bring them to patrons’ cars.

• All library materials will be sanitized or, in the case of books and magazines, quarantined for three days.

• Items may remain on your library account for up to a week in quarantine after being returned. (However, extended due dates will be in effect and fines will be waived.)

• All book drops with the exception of the alley drive-through book drop at the library, will remain open. They include:

When are items due?

• Any items checked out after Feb. 18 will have an extended due date and will not incur fines during this period.

• Extended due dates will be evaluated on a weekly basis.

Will I be able to pay library fines?

The library will not be accepting payment for fines during this time. Arrangements to pay for lost materials can be made by calling 928-777-1508.

May I drop off donations?

The library will not be accepting donations until further notice.