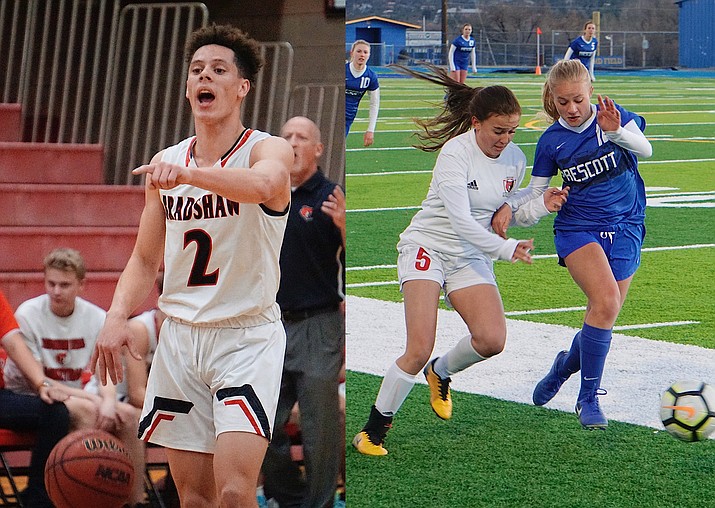 LEFT: Bradshaw Mountain guard Carter John calls out a play during a game against Buckeye on Tuesday, Dec. 10, 2019, in Prescott Valley. RIGHT: Bradshaw Mountain defender Alexis Lee (5) and Prescott defender Alexa Sell (11) jostle for the ball during a game on Monday, Feb. 3, 2020, at Bill Shepard Field in Prescott. The AIA — which regulates sports for the state’s public district schools and some charter and private schools — released a statement Monday that declared the suspension of all high school sports and activities. (Aaron Valdez/Courier, file)

PRESCOTT VALLEY — After Arizona Gov. Doug Ducey issued a decision on Sunday to shut down all schools statewide for two weeks due to the COVID-19 pandemic, the Arizona Interscholastic Association (AIA) followed up on Monday by putting athletics on hold for two weeks as well.

The AIA — which regulates sports for the state’s public district schools and some charter and private schools — released a statement that declared the suspension of all high school sports and activities. AIA sports information coordinator Seth Polanksy said in the statement that he anticipates March 30 as the earliest possible date of resumption, and there are no plans to postpone or cancel the spring postseason tournaments.

“We will keep all processes in place for the postseason tournaments. If the spring championship season extends for any period of time, the AIA will be ready to conduct tournaments in their entirety,” Polansky said.

In an essential joint decision, the NAIA and NJCAA each issued statements on Monday to cancel their spring sports seasons effective immediately due to the coronavirus threat.

Late last week, both governing bodies suspended all athletic operations for two weeks, but after receiving strong advisement from the Center for Disease Control and Prevention (CDC), they canceled their spring seasons entirely. Embry-Riddle Aeronautical University, which is governed by the NAIA, will have its softball, golf and track & field seasons canceled while Yavapai College, which is governed by the NJCAA, will have its baseball and softball seasons canceled.

“All possible scenarios that would have supported a spring sports season were seriously considered by multiple NAIA governance groups,” NAIA President and CEO Jim Carr said in the NAIA’s respective news release. “The growing state of emergency due to COVID-19, as well as the (CDC’s) recommendation yesterday … meant we could not in good conscience move forward with the spring sports season and championships.”

On- and off-campus recruiting for all sports will also be halted until April 15, with further evaluation to be assessed at that point in time. On a good note, no spring student-athlete will be charged a season of eligibility by either the NAIA or NJCAA.