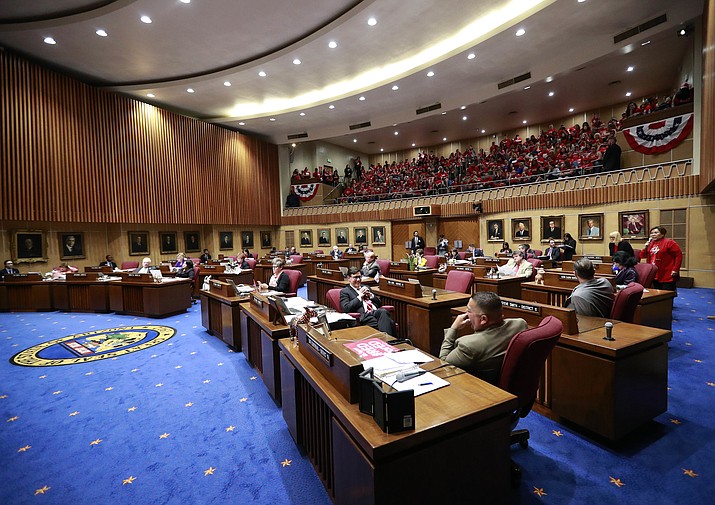 The Arizona Legislature is seen in this file image. The state’s top prosecutors says legislators may want to consider adopting laws to protect Arizona consumers from price gouging. (Courier, file)

Ryan Anderson, a top aide to Attorney General Mark Brnovich, said Thursday that Arizona does not have the kind of hurricanes, tornadoes and floods that occur in other states, disasters that have resulted in wholesalers and retailers jacking up prices and lawmakers responding with consumer-protection laws. About two thirds of all states have laws making such practices illegal.

But Anderson said Arizona has not been immune, citing the 2003 rupture of a gasoline pipeline that sent prices skyrocketing.

And he said that the outbreak of COVID-19 and the heavy consumer demand for certain items suggests that could also drive up prices.

Anderson stressed that the final decision rests with lawmakers. And he pointed out that, to date, there is no actual proposal under consideration for his boss to consider.

The comments come in the wake of claims by Gov. Doug Ducey that an executive order he signed Wednesday actually directs Brnovich to prosecute anyone who takes advantage of the situation to raise prices. Aides to the governor said they believe that power already exists under the state’s Consumer Fraud Act.

“The Attorney General’s Office does not have authority to enforce price gouging protections under existing consumer protection laws,’’ he said. “There is no prohibition in existing statute that would prevent a business or an individual from engaging in price-gouging tactics.’’

Part of the issue is defining what constitutes “price gouging.’’

A 2004 proposal sought to make it a crime for anyone in the chain of distribution, from manufacturer and supplier through distributor or retailer, to sell goods or services at a price that is 25 percent higher than before there was an “abnormal disruption of the market.’’

That was defined broadly to include weather conditions, power shortages, strikes, civil disorders, military action or anything “that causes the governor to declare a state of emergency.’’ The measure never was enacted.

Anderson said that lack of action here is not surprising given the general lack of severe weather.

“We don’t have a lot of natural disasters,’’ he said. “But if you go back more than a decade or so ago and you saw what happened with the Kinder Morgan pipeline.’’

That 2003 rupture of the 50-year-old pipeline in northwest Tucson cut supplies to much of the state, with prices rising to between $3 and $5 a gallon when it had been selling for less than $2 before the rupture.

Now, Anderson said, similar concerns are arising because of COVID-19.

“Just because we don’t have hurricanes or tornadoes doesn’t mean necessarily that the state isn’t going to vulnerable to price gouging,’’ he said.

Arizona is dealing with shortages of some items, like sanitary wipes, though there is currently no evidence anyone is trying to market those they have at markedly higher prices. But Ducey, in his executive order, said his concern is that some might raise prices for both laboratory tests to diagnose those with COVID-19 as well as to provide treatment.

Anderson said those concerns are legitimate.

“I think it’s appropriate that the Legislature have a dialog about whether or not these are protections they want to enact for Arizona consumers when this type of emergency or a situation takes place,’’ he said.

But don’t look for support from Ducey.

“There are no plans at this time to pursue a law change,’’ gubernatorial press aide Patrick Ptak said Thursday, saying the governor remains insistent that his executive order and emergency declaration “provides these authorities’’ despite the legal analysis and contrary view of the state’s top prosecutor -- the person who Ducey insists would be going after price gougers.

The web site FindLaw reports about two thirds of the states already have some form of protection.

For example, in Arkansas it’s a misdemeanor to sell commodities, household essentials and fuels after a declared emergency for more than 10 percent of the cost prior to the declaration.

Florida, beset by perennial hurricanes, provides for jail terms up to 60 days for selling essentials at “unconscionable’’ prices after an emergency is declared.

And New Mexico imposes penalties of up to $25,000 for selling items at “unconscionably excessive price’’ as determined by a court during a declared emergency.