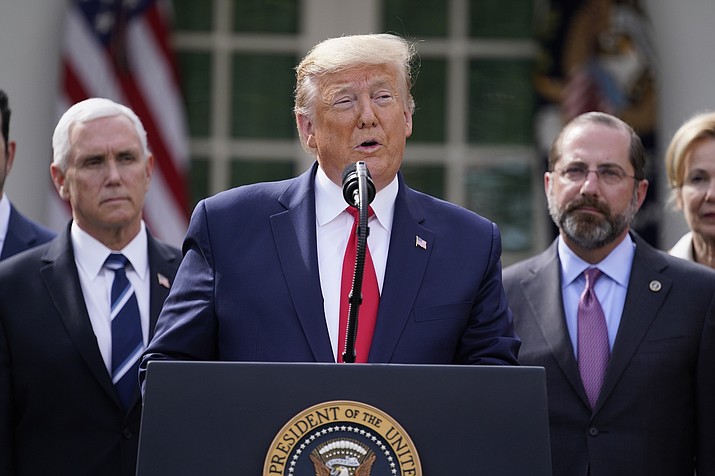 President Donald Trump speaks during a news conference about the coronavirus in the Rose Garden of the White House, Friday, March 13, 2020, in Washington. (Evan Vucci/AP)

WASHINGTON — President Donald Trump on Friday, March 13, declared the coronavirus pandemic a national emergency in order to free up more money and resources. But he denied any responsibility for delays in making testing available for the new virus, whose spread has roiled markets and disrupted the lives of everyday Americans.

Speaking from the Rose Garden, Trump said, “I am officially declaring a national emergency,” unleashing as much as $50 billion for state and local governments to respond to the outbreak.

Trump also announced a range of executive actions, including a new public-private partnership to expand coronavirus testing capabilities with drive-through locations, as his administration has come under fire for being too slow in making the test available.

Trump said, “I don’t take responsibility at all” for the slow rollout of testing.

“We are proud to have reached an agreement with the Administration to resolve outstanding challenges, and now will soon pass the Families First Coronavirus Response Act,” Pelosi announced in a letter to colleagues after days of negotiations with Treasury Secretary Steven Mnuchin. The House was poised to vote late Friday.

“I encourage all Republicans and Democrats to come together and VOTE YES!” He added, “Look forward to signing the final Bill, ASAP!”

The White House was under enormous pressure, dealing with the crisis on multiple fronts as it encroached ever closer on the president.

Trump has been known to flout public health advice — eagerly shaking hands during the more than hour-long afternoon event — but acknowledged he “most likely” will be tested now after having been in contact with several officials who have tested positive for the virus. “Fairly soon,” he said.

Additionally, Trump took a number of other actions to bolster energy markets, ease the financial burden for Americans with student loans and give medical professionals additional “flexibility” in treating patients during the public health crisis.

“Through a very collective action and shared sacrifice, national determination, we will overcome the threat of the virus,” Trump said.

Central to the aid package from Congress, which builds on an emergency $8.3 billion measure approved last week, is the free testing and sick pay provisions.

Providing sick pay for workers is a crucial element of federal efforts to stop the rapid spread of the infection. Officials warn that the nation’s healthcare system could quickly become overwhelmed with gravely sick patients, as suddenly happened in Italy, one of the countries hardest hit by the virus.

The ability to ensure paychecks will keep flowing — for people self-quarantining or caring for others — can help assure Americans they will not fall into financial hardship. There is also three months of paid family and medical leave. Small and mid-sized employers will be reimbursed through tax credits.

“We have an agreement that reflects what the president talked about,” Mnuchin said late Friday on Fox Business.

Throughout the day hopes for swift passage of the bill stalled as talks dragged and Trump dismissed it as lawmakers “not doing enough.” Republicans were reluctant to come on board without his backing, according to a person unauthorized to discuss the talks and granted anonymity.

Ahead of Trump’s news conference, Pelosi delivered a statement from the speaker’s balcony at the Capitol imploring the Trump administration and congressional Republicans to “put families first” by backing the effort to provide Americans with relief.

“Our great nation has faced crisis before,” Pelosi said. “And every time, thanks to the courage and optimism of the American people, we have prevailed. Now, working together, we will once again prevail.”

Pelosi and Mnuchin engaged in days of around-the-clock negotiations with cross-town phone calls that continued even as Trump was speaking. Both indicated earlier they were close to a deal. Voting in the Senate is not yet set, with senators out of town for the weekend, scheduled to return Monday.

They both promised a third coronavirus package will follow soon, with more aggressive steps to boost the U.S. economy, which economists fear has already slipped into recession.

The financial markets closed on an upswing after one of the worst nosedives since the 1987 downturn.