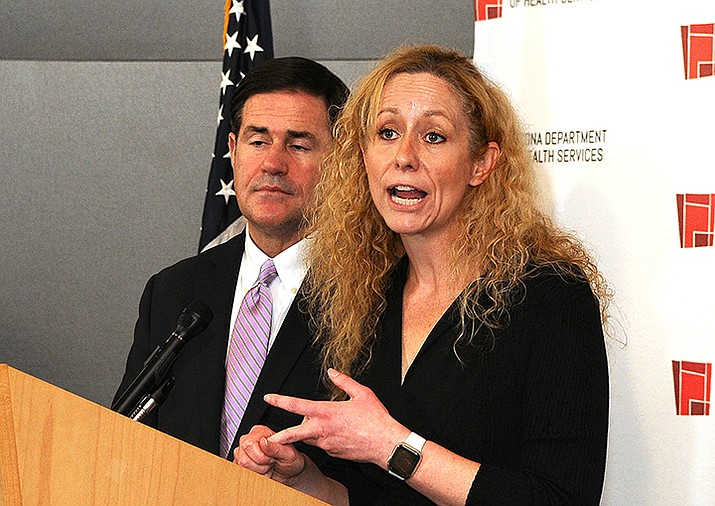 Nothing in the governor’s decision actually restricts what people can do or where they can go. And state Health Director Cara Christ said there are no plans to limit large public gatherings as governors in other states have done.

But even as Christ was saying there is no need to cancel events or urge closure of public facilities, Arizona State University President Michael Crow announced his school would switch to online instruction “wherever possible’’ for the next two weeks over concerns about the virus.

Crow, in a formal statement, said the school remains open, including the dormitories and food service. And he said that there are going to be exceptions where necessary for things like computer and research labs and performing arts.

He also said the university said it will continue in this mode for two weeks, “at which time the university will assess where things stand with COVID-19.

What the Ducey’s declaration includes:

• Easing licensing requirements for health officials and facilities, potentially making room for more patients as they are diagnosed;

• Allowing hospitals and health care facilities, including nursing homes, additional “flexibility’’ to question and screen both employees and visitors;

The governor also issued a separate executive order directing insurance companies and health plans to pay for care provided to patients who see doctors and laboratories who are not part of their network. And Ducey said his order also protects consumers against “price gouging’’ by private labs and health care providers for testing for the new virus.

Only thing is, the Republican-controlled Legislature rebuffed a bid more than a decade ago by then-Attorney General Terry Goddard to give the governor the power to declare a “supply emergency.’’ That would have required not only a finding that a product was in danger of being in short supply but also that it was “essential to the health, safety and welfare of the people of this state.’’

The governor was undeterred.

“We’ve consulted with attorneys,’’ Ducey said in response to a question by Capitol Media Services about his authority “This is the executive order and the emergency declaration.’’

“Arizona does not have laws prohibiting price gouging or charging high prices in times of emergency or heightened public health concerns,’’ he told Capitol Media Services. He said the laws cited by the governor’s office deal with things like fraud, deceptive practices, false promises or misrepresentation in the sale or advertising or merchandise.

Corieri, undeterred, also argued that, if nothing else, the power given to Christ by the declaration to plan and execute public health assessments, mitigation and preparedness response. That, she said would include “the availability and affordability of treatment and testing would be necessary to accomplish this.’’

Ducey’s declaration came just hours after legislative Democrats asked the governor to declare a special session -- to run concurrent with the regular session they are now in -- to approve more far-reaching proposals. These include creating funds to pay for mandatory testing, providing for free evaluation and testing for those without health insurance, and creating a fund to pay for sick leave for public employees under quarantine or sick.

The governor, however, said he was taking a much more measured approach, saying the problems in Arizona are not that severe, at least not now. What’s behind his moves to date, he said, is being prepared.

“These are proactive measures to limit community spread,’’ he said, situations where people who have no known contact with anyone who was ill still contract the disease.

For example, he said, there is no evidence that any of the two confirmed cases and seven suspected cases were in nursing homes and long-term care facilities.

“If that happened, we want DHS to be equipped to act immediately, and with urgency,’’ Ducey said. He also said his executive order is designed to “do more to protect vulnerable populations.’’

“We are constantly monitoring the local, national and global activities so that we can make data-driven decisions that protect our communities while having as minimal an impact on Arizonans’ daily lives as possible,’’ she said.

That, Christ said, fits into the decision to not cancel mass gatherings.

“We are working right now with the CDC on brand-new community mitigation guidance they just put out,’’ she said.

“And we are not at a point where we would recommend those things,’’ Christ continued. “But we are constantly evaluating to see if those measures do make sense.’’

That same reasoning, she said, applied to her decision not to ask the state’s universities to cancel classes even though ASU went a different direction.

And for places where classes are not canceled, Christ had some advice.

“If you are sick, do not attend class,’’ she said.

For example, she said, a health care facility licensed for a certain number of beds might have space where it could house additional patients.

“We would be able to go in there are rapidly license them,’’ Christ said, without having to go through the normal process.

But Christ said nothing in the order allows someone to engage in medical practices beyond their scope. So even with an emergency a nurse could not perform the duties of a doctor.

The provisions on medical facilities, nursing homes and long-term care facilities, Christ explained, is to better protect the patients.

“It could be a questionnaire asking if you have fever, if you had traveled in the last 14 days,’’ she said, leaving it up to the operators to decide whether a single “yes’’ answer would preclude them from visiting relatives who live there.

“They can do temperature checks when you come in,’’ Christ said.

“The majority will go out in contracts to our local and tribal health departments so that they can do the boots-on-the-ground work,’’ she said, like investigating contacts and following up on cases. Christ said her own agency will keep some of it for laboratory testing.

At this point her agency is testing the samples provided to it by public health agencies. She said doctors also will be able to send samples to private laboratories that are gearing up to test for the virus.

But Christ said there is no reason for widespread testing of everyone else, including health care workers, if they show no symptoms.