Felonious driving leads to crash, arrest on Highway 69 in Prescott Valley
No one injured despite heavy damage to vehicles 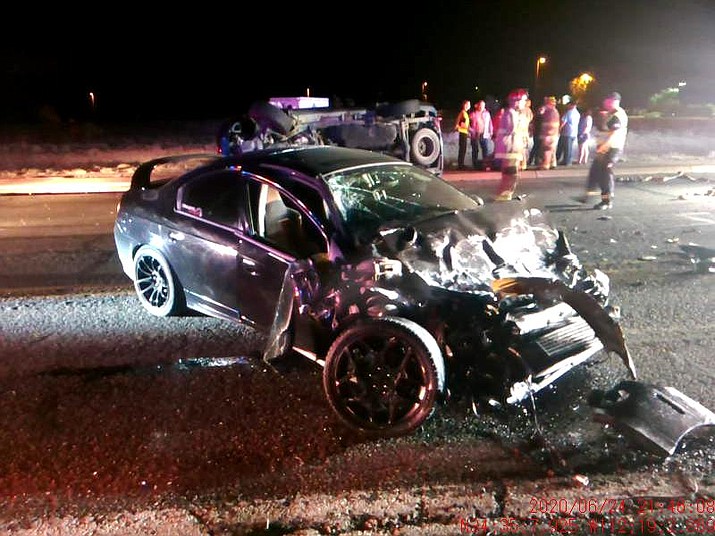 A black Dodge Neon was heavily damaged after its driver allegedly drove it into oncoming traffic along Highway 69 in Prescott Valley Wednesday night, June 24, 2020. (PVPD/Courtesy) 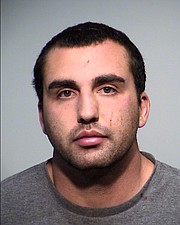 Harrison Vina of Prescott Valley was arrested after recklessly crashing his car into an oncoming vehicle along Highway 69 in Prescott Valley Wednesday night, June 24, 2020. (YCSO/Courtesy)

A Prescott Valley resident was arrested after recklessly crashing his car into an oncoming vehicle along Highway 69 Wednesday night, June 24, police said.

At about 9:30 p.m., Prescott Valley Police Department (PVPD) officers spotted a black Dodge Neon sedan being driven erratically in excess of 80 mph, according to a PVPD news release. The car was heading east on Highway 69.

A patrol officer attempted to pull the Neon over, but the driver continued to speed away, according to the release.

Moments after losing sight of the vehicle, police dispatch began receiving telephone calls of a traffic accident with an overturned vehicle at the intersection of Highway 69 and Navajo Drive.

When officers got to the crash scene, they learned the driver of the Neon had fled the area on foot.

Due to the extensive damage and criminal involvement, the highway was closed in both directions until about 1 p.m., according to the Arizona Department of Transportation.

An investigation determined the Neon had crossed over the center line of the highway and collided head-on with a blue Toyota 4-Runner SUV traveling westbound, PVPD reported.

The SUV flipped over one-and-a-half times, landing on its side. 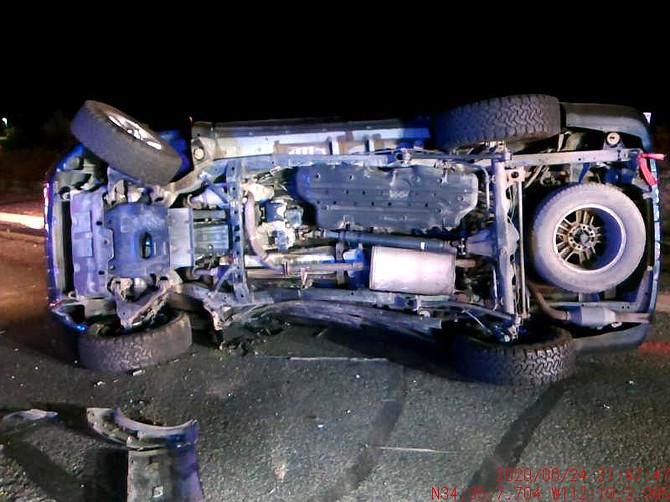 A blue Toyota 4-Runner SUV rests on its side after a head-on collision along Highway 69 in Prescott Valley Wednesday night, June 24, 2020. (PVPD/Courtesy)

“Other than being shaken up, the driver was unhurt,” PVPD spokesperson Jerry Ferguson said. “[He] stated that seat belts and air bags were the reason he was not seriously hurt.”

Witnesses said it appeared the driver of the Neon deliberately ran into the SUV.

The erratic driver, 26-year-old Harrison Vina of Prescott Valley, was later located and arrested. He was transported and booked into Yavapai County jail in Camp Verde on numerous misdemeanor and felony charges including unlawful flight from law enforcement vehicle; failure to remain at accident scene; reckless driving; aggravated assault with deadly weapon; exceeding speed limit; failure to drive on right side of roadway; driving with license suspended/revoked/cancelled; and endangerment with substantial risk of imminent death. 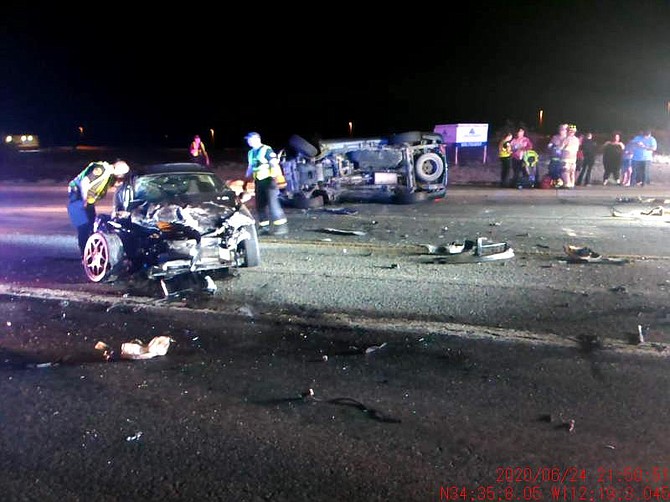