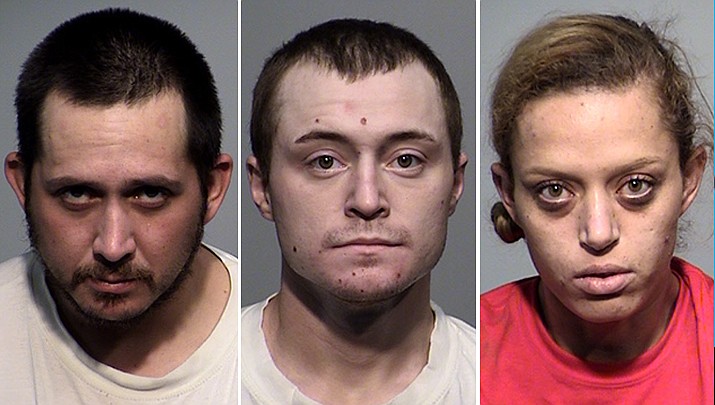 Jimmie Treakle, Alec Ramsey and Areanna Newhall were all arrested in Cottonwood for allegedly possessing and selling fentanyl pills. (YCSO/Courtesy)

Two men and a woman have been arrested for allegedly selling fentanyl from a motorhome parked on a property in the 2400 block of South Cedar Lane in Cottonwood.

During the middle of May, detectives from the Partner’s Against Narcotics Trafficking (PANT) task force developed information regarding the sale of fentanyl pills from the location, according to the Yavapai County Sheriff’s Office (YCSO).

Over several weeks, detectives gathered enough information to identify specific individuals involved in the alleged drug sales and obtain a search warrant for the motorhome.

Around 8:30 p.m. on June 22, the warrant was served and three Cottonwood residents were detained inside the vehicle: 24-year-old Alec Ramsey, 23-year-old Areanna Newhall and 33-year-old Jimmie Treakle.

During the bust, Newhall was caught with her hands inside her waistband, YCSO reported. Detectives searched her and found a zip-lock baggie containing 259 fentanyl pills.

Ramsey was detained and found to be carrying an undisclosed amount of methamphetamine, YCSO reported. Treakle was also detained.

Detectives found additional fentanyl pills and some methamphetamine along with associated paraphernalia throughout the motorhome.

Newhall acknowledged selling fentanyl for the last couple of months with Ramsey, YCSO reported. She told detectives that the pills were purchased in the Phoenix area using her unemployment pay and money provided by Ramsey. She also admitted to concealing the baggie of fentanyl pills when detectives entered the motorhome.

Ramsey denied selling drugs while Treakle claimed he was just visiting the pair and had used fentanyl while inside the motorhome, YCSO reported.

All three were arrested and booked into the Yavapai County jail for possession and sale of a controlled substance.