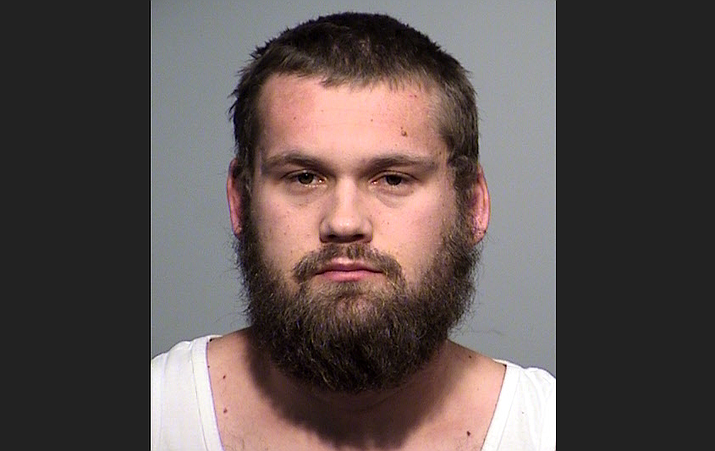 Cody Shanks, 30, was arrested in Cottonwood on June 17 for allegedly distributing pornographic images of pre-pubescent girls and sexual indecency. (YCSO/Courtesy)

A Cottonwood man who was arrested twice earlier this year on charges related to possession of child pornography and indecent exposure has once again been arrested on similar charges, according to the Yavapai County Sheriff’s Office (YCSO).

Cody Shanks, 30, was initially arrested on January 10 after allegedly exposing his genitals to children in his neighborhood.

During that arrest, detectives with the Yavapai County Sheriff’s Office (YCSO) got a warrant to search Shanks’ cells phones and other electronic devices. A forensic review of the content on those devices found multiple pornographic images and videos of underage children, resulting in Shanks being arrested again on January 16.

Though initially held on a $75,000 bond after the second arrest, that bond amount was later reduced to $10,000 and Shanks managed to post bail in early March, YCSO reported.

On June 17, detectives followed up on a child exploitation tip linked to an internet account that led them to Shank’s home on S. Pinto Trail once again.

Using search warrants, detectives found a video chat between Shanks and another user in which Shanks shared a naked image of himself and two images of child pornography involving pre-pubescent girls.

“Shanks’ comments about his desire to sexually engage those children shown in the images,” YCSO spokesperson Dwight D’Evelyn said.

Detectives eventually arrested Shanks during a traffic stop near his home and took him into custody.

When confronted with what detectives had found, Shanks refused to talk about it, D’Evelyn said. Electronic devices were seized from his home and vehicle during the investigation and he was booked into the Yavapai County jail on charges including five counts of distribution of minor in sexual condition and sexual indecency/sexual contact.

Shanks is now held without bond.