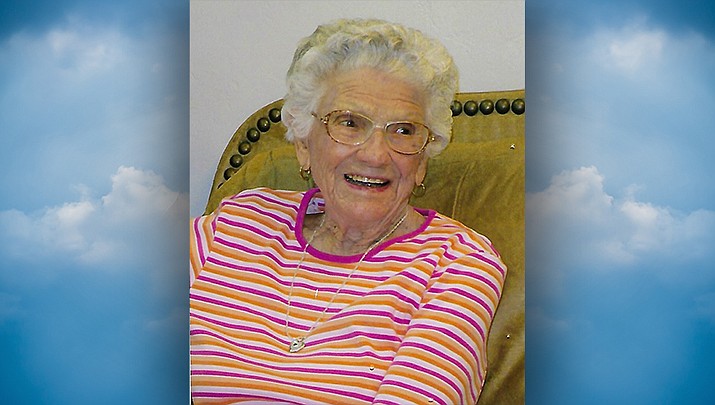 She came to Arizona with her father, mother, grandmother, two brothers and one sister, in the fall of 1928. They celebrated Thanksgiving that year in Laveen, Arizona enjoying dinner on the back of a truck. The family Homesteaded in Buckeye.

Lucile went to school in Buckeye and attended Phoenix Union High School. She married John W. Kring, September 18, 1939 in Wickenburg, Arizona. They lived in the Buckeye area until John returned home after serving in the Navy in World War II. They moved to Yuma in 1946, where they raised their five children.

In the 1960’s she and the two youngest boys traveled around the state following her husband in his construction career. Lucile worked as a waitress, as a “Rosie the Riveter” during the war. In the 1950’s she was an Avon lady and instructor on school playgrounds for the Yuma Parks and Recreation program. She and John retired to Humboldt, where they lived until John’s death.

She moved to the Arizona Pioneers’ Home in 2010 where she made many friends and enjoyed the activities, especially BINGO. Lucile was preceded in death by her father, James F. Campbell in 1931; mother, Lennie Campbell Hart in 1989; stepfather, Andrew A. Hart in 1987; one son, Harold D. Kring in 1971; her husband of 63 years, John W. Kring in 2002, and two brothers and one sister. She Is survived by her children, Charlie and Alice Kring of Prescott, Joe and Francis Kring of Buckeye, Tom and Gloria Kring of Phoenix and Carolyn and Leon McKendree of Prescott Valley. She had 15 grandchildren, many great-grandchildren and great-great grandchildren, nieces and nephews.

The family would like to thank the Arizona Pioneers’ Home staff for their loving and tender care throughout her years there and especially her last weeks and days of life. A graveside service is planned for Thursday, June 25, 2020 at 10:00 a.m. at the Heritage Memorial Park in Dewey, Arizona. In lieu of flowers, please consider a gift to St. Jude’s Children Hospital, The Arizona Pioneers’ Home or Maggie’s Hospice.