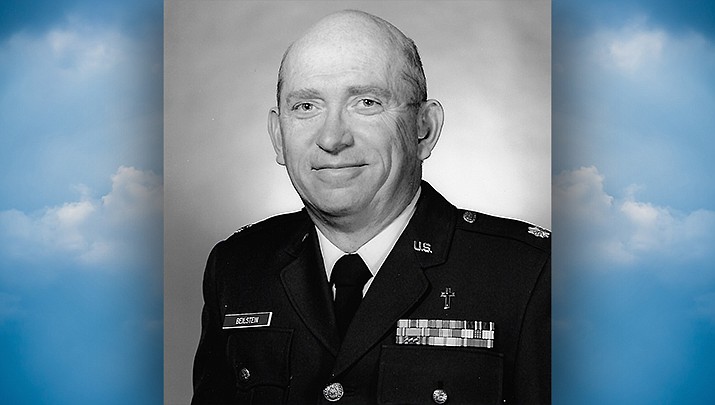 Chaplain Col. Gerald S. Beilstein, 79, of Prescott, Ariz. passed away into his Shepherd’s arms Thursday, June 11, 2020. He passed peacefully smiling at his home with family present and hymns playing in the background.

Gerald Samuel Beilstein was born November 26, 1940, in Butler, Penn. to Carl and Lois (McKay) Beilstein and grew up there. He graduated from Butler High School in 1958. At 18 he envisioned Jesus and surrendered his life to Him while on Guard Duty. After he attended the University of Maryland in the Military Extension Centers and Cabrillo Junior College, he attended Bethany Bible College (BBC) in Santa Cruz, Calif.

He graduated then on June 26, 1966, he married Virginia Ner. They were married for 53 years, had two daughters and entered ministry together. Gerald received a Bachelor of Science degree from BBC and went on to Oral Roberts University in Tulsa, Okla. to receive a Masters of Divinity (MDiv) Cum Laude. He further pursued post-graduate education with a ThM (Masters of Theology) degree from Eastern Baptist Theological Seminary. Known as the first Assemblies of God (AG)-ordained chaplain ministering within the Veterans Administration Hospital in 1969; he retired on June 2, 2000, after 31 years of dedicated service. Gerald served in the Army, Navy, and Air Force Reserves where he retired as Colonel. He truly loved his family, country, friends and his Lord and Savior Jesus Christ.

Survivors include his wife, Virginia Beilstein of Prescott and their daughters, Cindy Reeves and her husband, Lee of Goodyear, Ariz., Debbie Fulthorp and her husband, Brian of Avondale, Ariz.; grandchildren, Bethany Reeves, Mercy Fulthorp, Samuel Fulthorp, Benjamin Fulthorp; a brother, Jim Beilstein and wife, Jackie, of Oregon; a brother-in-law, Bill Oesterling of Cottonwood, Ariz. and many nieces, and nephews. He was preceded in death by his parents, Carl and Lois Beilstein; brother, Jack Beilstein and beloved sister, Mary Jane Oesterling.

Online condolences may be directed to https://www.ruffnerwakelin.com.