Largest group testing positive for COVID-19: age 20 through 44, state says
Challenge is crafting message getting them to believe the threat 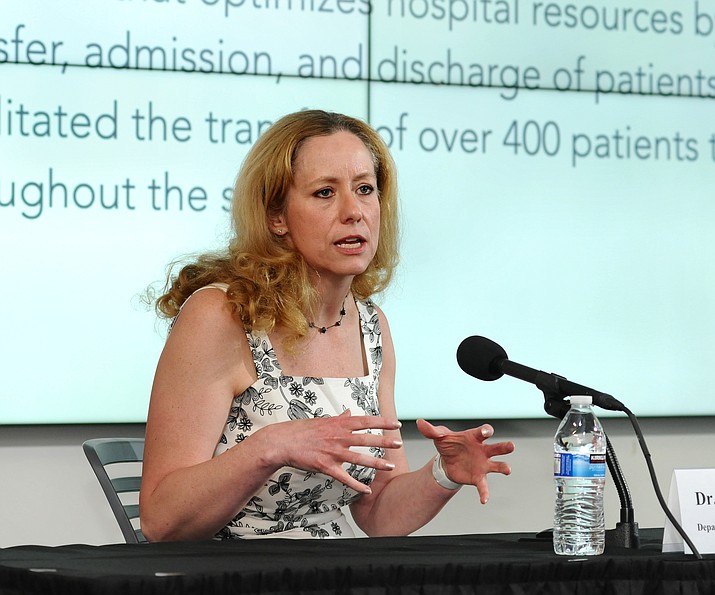 PHOENIX — The state’s top health official says the key to slowing the spread of COVID-19 could be finding ways to reach the people who believe they’re the least likely to get infected or suffer ill effects.

Dr. Cara Christ said the biggest group of positive test results is now among those age 20 through 44.

“They’re likely not the ones that are going to have the outcomes and the risk factors from COVID-19,” she told Capitol Media Services.

“But we need everybody to keep in mind that all of us have connections to loved ones and family members that are high risk or people out in the community,” Christ said. “And that’s what we’re trying to protect by containing the spread.”

The trick now, she said, is crafting a message that is designed with that audience in mind. “We do want to see these numbers come down and we want to see the percent positivity go down,” Christ said.

That, however, means convincing individuals to act safely — including those who may believe that even if they don’t think they’re invincible that contracting the virus won’t really hurt them. And that, Christ said, comes back to the messages of physically distancing and wearing a mask while out in public when staying six feet from others is impossible.

That message, however, is not getting across to those in the 20- to 44-year-old demographic, she said, as evidenced by the high number of people in that age group who are testing positive for the virus — and as shown by videos of people crowding bars without masks.

These are the people who are less likely to suffer severe adverse effects. But they’re clearly coming down with — and probably transmitting — the disease.

But they make up less than one-third of the population.

Yet they’re not dying at the same rate of the disease, accounting for just 67 of the more than 1,300 deaths.

Christ said exhortations for these people to protect themselves apparently does not work. So that, she said, requires a change in the message. “We need everybody to keep in mind that all of us have connections to loved ones and family members that are high risk, or people out in the community,” she said.

“We need everyone to think about, ‘You may not feel sick, you may not think that you’ve been infected,’” Christ said. And a lot of people appear asymptomatic.

“So it’s really important that if you are going to be within six feet of somebody you have got to wear that mask,” she said.

Christ said it may not be that younger people see themselves as invincible.

“I think a pandemic and a virus, they’re scary things, they’re hard to comprehend,” she said. “And I think if you are not seeing the direct outcomes, you may not think that it applies.”

Christ said her agency had the same problem crafting a message during the opioid epidemic of trying to reach those who didn’t see it as their issue.

In that case, she said, the Health Department crafted some very scary messages — scary enough so that her son, 8 at the time, came crying to her after seeing some on social media. “It gave me that opportunity to talk with him about the dangers of opioids,” Christ said, “and so, it worked.”

But finding a message that resonates when warning people about a virus, she said, is something quite different. And that may be telling people that they need to think about more than how the pandemic affects them personally.

“A lot of them have grandparents and loved ones that they love and don’t want to see anything happen to,” Christ said, sending a message that “this is really, really dangerous for those you love and so we need to do everything we can to protect them.”

It is not just that category — 20-to-44-year-olds — with a sense that they’re not affected that is complicating efforts by the state to curb the spread of COVID-19. The problem, according to Gov. Doug Ducey, extends to those even younger.

The governor said that, for a long time, he didn’t personally know anyone who had the virus. “But just recently, I know a lot of people that have contracted this,’’ he said. “And I want to tell you where they contracted this: at graduation parties, at private gatherings in homes.”

Christ said reaching this group isn’t a simple matter of telling them that, while they won’t get sick, they can bring the disease home to others. “That’s not going to work with them,” she said.

One thing she said her agency has learned is that, when dealing with teens, it’s probably best that the message isn’t coming from the government.

“It probably should come from a trusted source for that group,” Christ said.

At the very least, that means using different media.

And then the message itself needs to be different for teens than it is for adults. “For instance, when you’re looking at vaping, what resonated with the kids was, ‘Don’t lie to me, don’t tell me this is safe when it’s actually not,’” Christ said.

Ditto, she said, in reaching teens on the issue of opioids, with teens understanding that just because something is being advertised as available by a prescription that makes it safe.

“You’ve got to find what resonates with them,” Christ said.