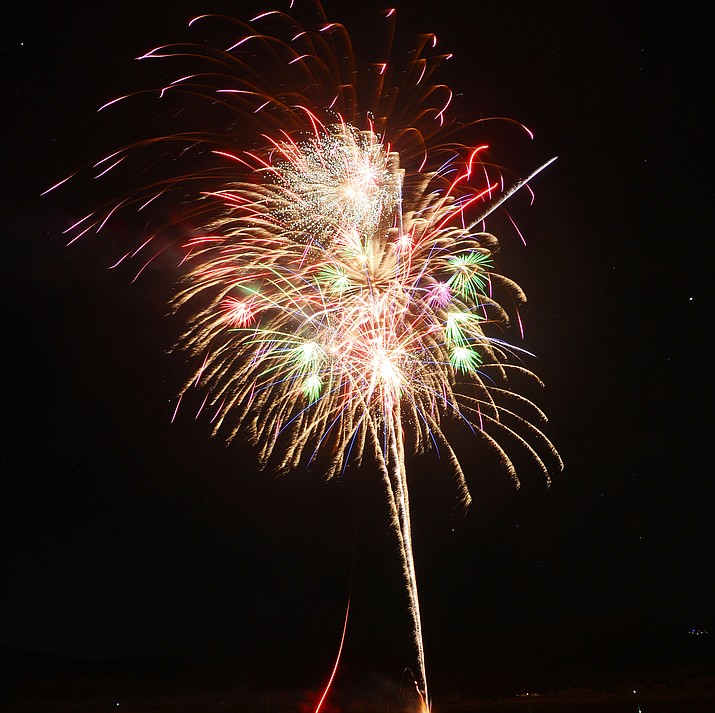 Fireworks explode at the City of Prescott’s 2019 Watson Lake Fourth of July Celebration. The 2020 event will again be held at Watson Lake. (Les Stukenberg/Courier, file)

Prescott’s fireworks-on-the-water 2.0 is a go this year, with a few changes to comply with COVID-19 guidelines.

“No matter what happens from here, the fireworks will go on,” Recreation Services Director Joe Baynes told a group of city staffers who gathered Thursday morning, June 11, to discuss the details of the Fourth of July event.

And although the accompanying celebration was earlier in question because of the COVID pandemic, Baynes reported on Friday, June 12, that the event received its necessary liquor license earlier that day, and that the music, waterslides, and food trucks likely would go on as well.

As of June 12, the towns of Chino Valley and Prescott Valley will be holding their fireworks events on the Fourth of July as well.

It all depends on fire restrictions. Also count on COVID-19 restrictions and social-distancing guidelines.

Watch the Courier for details.

“The whole event is a go, unless the governor backs up (on COVID restrictions) in the meantime,” Baynes said Friday.

To date, Gov. Doug Ducey has said Prescott’s July 4 events could go ahead, with restrictions on attendance.

For the second year, the July 4 event will happen at Prescott’s scenic Watson Lake, with the fireworks display taking place from a barge on the water.

Baynes said a barge was recently constructed for the launching of the fireworks.

Event promoter Steve Gottlieb emphasized the uniqueness of the setting. “Let’s talk about the beauty of Watson Lake,” he said Friday. “You don’t have another venue that looks like Watson Lake in the state.”

To comply with COVID social-distancing guidelines, Baynes said the city would limit the attendance at the event to 5,000 people.

“We feel like we can put 5,000 people comfortably in there with social distancing,” Baynes said.

New this year will be the “drive-in option,” which will allow cars to park on Highway 89 overlooking the lake.

The highway will be closed to traffic at some point on Saturday, July 4, although Baynes said the traffic-control details are still being worked out and will be released to the public in the coming weeks.

The city closed the highway for last year’s event as well, but cars were not allowed to park on the highway. Baynes said the city decided to allow for that option this year.

The parked cars will be under COVID restrictions, and people will be required to stay in their vehicles, Gottlieb said. Parking for the event is $10 per car.

Like at previous July 4 celebrations, this year’s event will feature a full afternoon and evening of entertainment. Gottlieb said the event would begin at 3 p.m. and last until about 9.

Although this year’s event will not include inflatable bounce houses because of COVID concerns, it will feature waterslides, food trucks, a beer garden, and music by the 108th U.S. Army Band.

General admission is $5 per person, and $20 for a pre-sale wristband that will allow for unlimited use of the waterslides. More information on the details of the event is available online at prescottevents.net.

Baynes said the waterslides would use fresh water, rather than recycled water.

In recent years, the city has contracted out its Fourth of July celebration event. Gottlieb’s Eagle Management and Events contracts with the city to conduct the event. While the city provides traffic control and other services, it does not contribute financially to the event.

This year, Gottlieb said sponsor Little Dealer Little Prices is covering the cost of the fireworks, and Patterson Orthodontics is sponsoring the waterslides.

Fireworks on the water: Prescott prepares for Watson Lake Fourth of July
Fourth of July event to see fireworks launched off barge in middle of lake, day full of family fun
Prescott fireworks will be a ‘drive-in’ event; most other activities canceled
Prescott's July 4 fireworks show could close Highway 89 for up to 10 hours
Prescott cancels July 4 fireworks, Independence Day celebration will proceed
Event Calendar