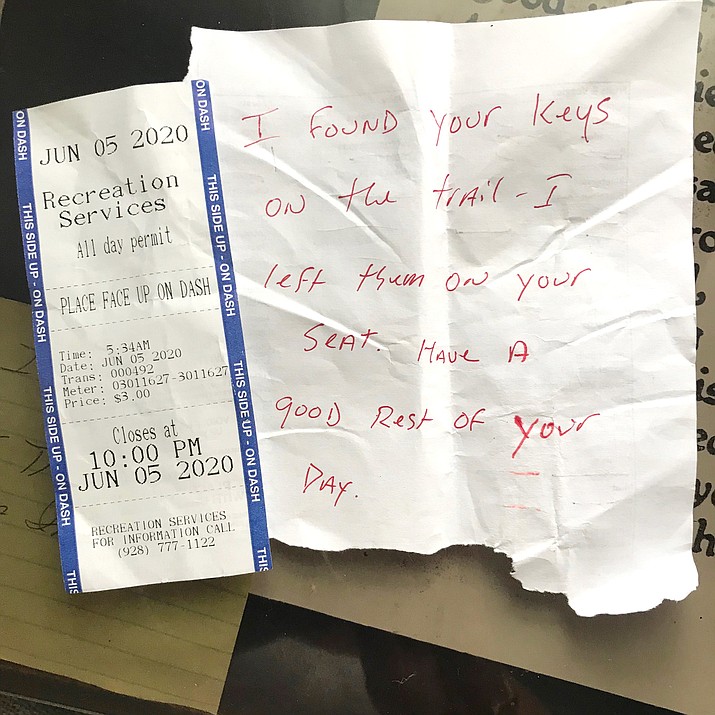 Courier reader Cindy Thompson went to hike the Prescott Peavine Trailhead near Watson Lake Friday morning, June 5, and realized she somehow lost her keys. To her surprise, she later discovered a note on her car door from a person who found them.

The good Samaritan left a note inconspicuously tucked under the driver-side door handle saying, “I found your keys on the trail. I left them on your seat. Have a good rest of your day.”

The keys were placed on the seat in a way that allowed them to blend in and reduce the risk of anyone seeing them and taking the car.

“Thank you. You made my day, my month, my year,” Thompson said. “My safe deposit box keys and other important keys were on that ring — everything was on there, and it would have been an enormous task to try to replace them.”

Thompson, 73, is a cancer survivor and said such acts of kindness truly warms her heart.

“Thank you for being so kind,” she expressed to the unnamed man or woman along with a promise. “I will pay it forward.”

Have you seen something wonderfully kind in your community? Send your photos or videos to dCourier.com/kindness.