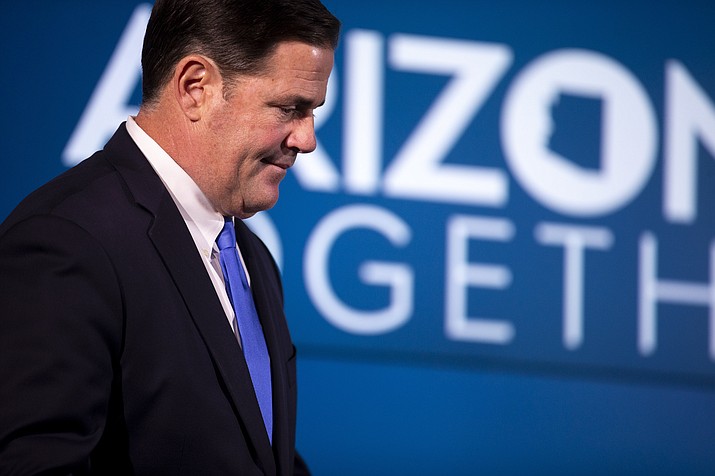 Arizona Gov. Doug Ducey at a press conference about protests and COVID-19 in Arizona on June 4 in Phoenix. In a series of tweets Monday, June 8, 2020, Ducey announced he was not going to renew the 8 p.m. curfew he had imposed on May 31. (Sean Logan/The Arizona Republic via AP, Pool)

PHOENIX — Arizonans are now free to stay out all night if they want without fear of arrest.

In a series of tweets Monday, Gov. Doug Ducey announced he was not going to renew the 8 p.m. curfew he had imposed on May 31 following some rioting and looting at Scottsdale Fashion Square. Since that time there have not been major problems.

“I want to thank both the peaceful protesters and law enforcement professionals for their cooperation during Arizona’s statewide curfew,’’ Ducey wrote. “Arizona has avoided much of the violence we’ve seen in other states and large metro areas.’’

Arizona has been the only place with a statewide curfew.

Repeated efforts to speak with Ducey have gone unanswered. That leaves only his Twitter messages.

“I’m also thankful to all Arizonans for their patience during this time,’’ the governor wrote.

“Our state and nation are facing multiple challenges, and I’m very appreciative for how the citizens and leaders of our state and conducting themselves during this historic moment,’’ Ducey continued.

But the governor also suggested that abolition of the curfew did not mean things were necessarily going back to the way they were before.

“With the curfew expiring, Arizona DPS will remain vigilant, working with local law enforcement leaders to ensure that they have the tools necessary to keep our streets safe and protect the rights of all residents to make their voices heard,’’ Ducey said.

But gubernatorial press aide Patrick Ptak said that the National Guard soldiers whom Ducey called out when he imposed his curfew are not standing down.

“The declaration of emergency is still in effect,’’ he said.

“It’s just the curfew that has expired,’’ Ptak continued. “And the Guard remains authorized to support local law enforcement.’’

He had no immediate figures of how many soldiers are deployed. But as of last Thursday, Maj. Gen. Michael McGuire said he had 1,421 troops activated for law enforcement support.

That is on top of the 860 who already had been deployed to help Arizona deal with the COVID-19 outbreak, performing duties ranging from helping provide supplies to stores during the shortages that emerged when the outbreak began to setting up field hospitals and delivering medical supplies to the Navajo Nation.

Ptak also had no immediate cost figures for deployment of soldiers for law enforcement or how the state intends to pay, saying there may be a way to tap funds the governor made available when he issued his emergency declaration.

But, on the subject of a curfew, he echoed the governor’s sentiment that it was no longer necessary.

“The curfew was put in place after we saw the incidents last week in Scottsdale that involved looting and rioting,’’ he said. “It was meant as a tool for local law enforcement to be able to use, as needed, to prevent that type of looting and rioting.’’

And Ptak said it was the right call.

“We just haven’t seen those situations which other states have seen,’’ he said.