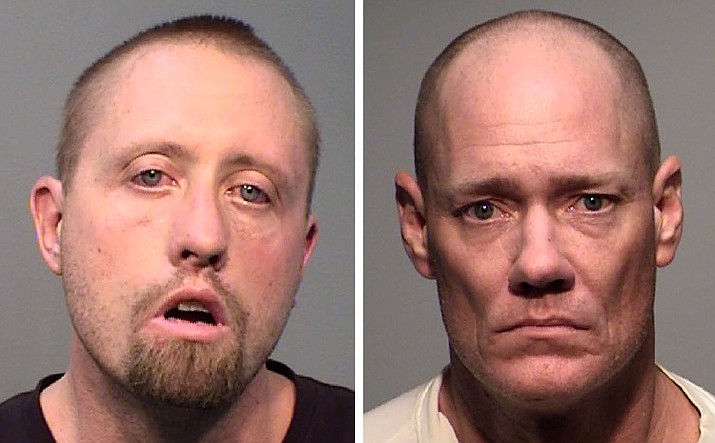 Brady Bennett, 34, and John McVeigh, 47, were arrested by Yavapai County Sheriff's Office deputies found 11 grams of methamphetamine, 34 blue “M30” pills believed to be fentanyl, a loaded syringe containing a brown substance likely heroin, and several items of drug paraphernalia in their motel room. They were also in the hotel room with an underaged girl. (YCSO/Courtesy) 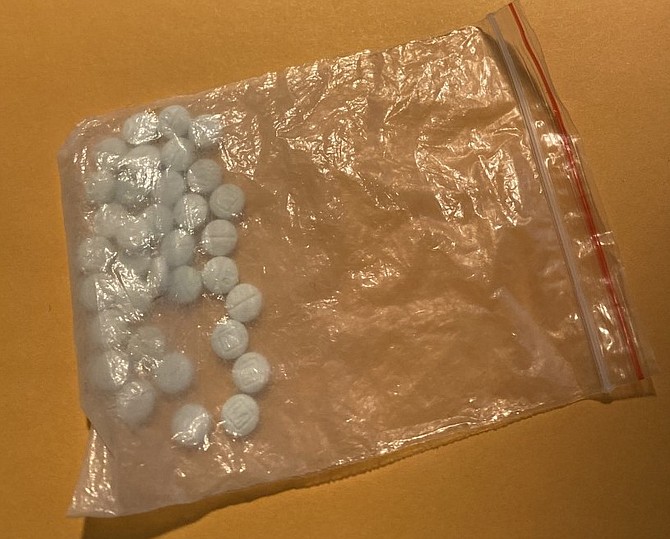 Two Prescott men were arrested in July – one on a variety of drug charges, and the other on drug charges and sexual conduct with and exploitation of a minor, according to a news release from the Yavapai County Sheriff’s Office.

The release reports that John McVeigh, 47, was initially arrested in June, after a traffic stop in Prescott Valley resulted in officers finding five grams of heroin, three grams of methamphetamine, 66 “M30” fentanyl pills, 20 grams of marijuana, a THC vape pen, and 91 Suboxone strips.

“When interviewed, (McVeigh) admitted to his involvement with drug sales, specifically selling Fentanyl and heroin,” states the news release.

McVeigh was booked into the Yavapai County Jail, and was later out on felony release, the release added.

Then in July, detectives from Partners Against Narcotics Trafficking (PANT) received information that since his release, McVeigh was again selling fentanyl, methamphetamine, and heroin.

In addition, PANT received information that another involved man identified as Brady Bennett, 34, was allegedly “sex trafficking a 16-year-old girl.”

On July 14, PANT detectives obtained a warrant for McVeigh’s motel and two vehicles associated with the suspects. McVeigh, Bennett and the 16-year-old girl were stopped and detained by a Yavapai County Sheriff’s deputy.

McVeigh reportedly told officers the teenage girl was Bennett’s girlfriend. The release notes that McVeigh “is also a registered sex offender but denied any sexual relationship with the teen girl.”

As the investigation continued over the next several days, detectives reportedly found video evidence proving a sexual relationship between Bennett and the teen girl beginning when she was 15. “Detectives discovered the sexual relationship was also used by (Bennett) to apparently trade favors on behalf of the teen for others,” said the release.

The Sheriff’s Office reports that the investigation “is ongoing into the activities of (McVeigh) and (Bennett) related to sex trafficking with the teen victim along with the possibility of additional victims.”

Bennett was charged with sexual conduct with a minor, sexual exploitation of a minor, possession of a dangerous drug (methamphetamine related), and possession of drug paraphernalia. He is being held on $200,000 bond.