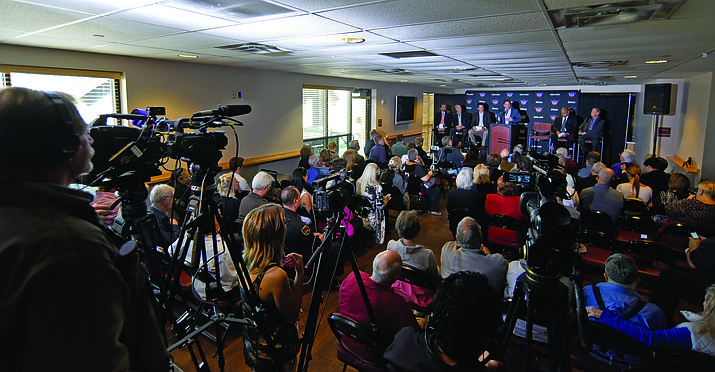 The Phoenix Suns hold a press conference at the Findlay Toyota Center announcing the arrival of the Northern Arizona Suns. Formally the Bakersfield Jam of the then-NBA D-League (Now NBA G League) were purchased by Phoenix and moved to Prescott Valley in April 2016. Now four years later, the team is moving to Phoenix to play one season (2020-21), then is being sold to the Detroit Pistons of the NBA. (Courier file photo)

Once thought of as a way to “expand the Suns brand in the state,” the Northern Arizona Suns fell victim to big-league decisions driven by money and a misunderstanding of community and commitment.

Those words, “expand the Suns brand in the state,” were uttered by none other than Phoenix Suns President and CEO Jason Rowley during an introductory press conference of the Suns in Prescott Valley back in April 2016.

So much for that.

Why establish a fan base, market high-profile athletes and a team to the community by attending youth camps, turkey giveaways, Christmas-time shop with a cop events and signing to practice at the local Boys and Girls Club only to cut bait after three years and bail?

Earlier this month, the Town of Prescott Valley announced the NBA G League club was leaving for Phoenix.

Maria Baier, senior vice president of public affairs for the parent-club Suns, said July 7, “As you might imagine, the impact that the global pandemic has had on the sports and entertainment industry has forced our organization to evaluate how we manage our business including the streamlining of operations. One aspect of a reorganization requires us to move the Northern Arizona Suns from Prescott [Valley] and the [Findlay Toyota Center].”

So basically, the parent-club Suns are saying that COVID-19 is to blame for this move, and because they’re losing revenue (or eventually will), we need to cut our losses.

News flash … minor league teams rarely make money, much less during a pandemic. That’s not why you have them, anyway, folks. Besides, isn’t everyone losing revenue at this time? Professional sports has lost billions in the wake of the coronavirus.

And if we’re talking about lost revenue, when it comes to the Suns, I’d like to ask ... where?

The team was disbanded nearly four months ago after games were postponed due to the coronavirus. Players, coaches, staff, all went home, or to train in Phoenix.

With only a few weeks left on the schedule, that meant bills like rent money for player housing in Prescott Valley, or the cost to shuttle them to and from Phoenix was going to disappear anyway, right?

Finally, the club wasn’t losing money paying game-day staff via the Findlay Toyota Center to run scoreboards, announce, cook food, take tickets and whatever because well, there are no games!

Not long after the Town of Prescott Valley released this news onto the world, the media relations department for Northern Arizona also had something to say in its own statement, almost leaving the door open to stay in Prescott Valley:

“It’s premature to say anything definitive, but due to the economic realities of the COVID-19 pandemic, we have begun to explore moving the Northern Arizona Suns closer to our parent club in Phoenix.”

We lived with that confusion for weeks until Wednesday when Phoenix Suns General Manager James Jones dropped the hammer, not only confirming the G League club is leaving for Phoenix this winter, but after 2020-21, he feels the Suns franchise has no need for a G League team at all.

With that, the parent club will be selling the Prescott Valley-based (or now, Phoenix-based) Suns to the Detroit Pistons.

“After an extensive internal review we determined that ownership and management of the Northern Arizona Suns does not align with the Phoenix Suns’ strategic plan for player development over the next three-to-five years,” Jones said in a statement Wednesday, July 29.

He gave examples like roster positions 11 to 15 are better served practicing in an NBA setting rather than in Prescott Valley.

Well I agree, except for much of the time, roster players 11 to 15 usually practiced in Phoenix with the big club, anyway.

Jones also pointed to the fact that, “The teaching experience of the Phoenix Suns’ coaching staff operating within a shared set of guidelines creates an effective learning environment and growth opportunities for our players.”

Is that NBA-speak for placing blame on Northern Arizona’s coaching staff for not following suit with how the VARSITY team does things?

I would disagree with Jones on that front, because I’ve sat in practices and covered Suns games from the beginning. Each coach, Ty Ellis, Cody Toppert and Bret Burchard, did everything they could to teach the “Suns Way,” despite the fact that the “Suns Way” has earned the beleaguered NBA franchise one of the worst winning percentages in the league, including a decade-long playoff drought.

And let’s not forget, the NBA’s goal is for each franchise to have their own G League team, which would make it a true minor league system. There are 28 in total, meaning the Suns will be one of two teams without a G League club in the NBA moving forward.

Explain that one, Robert Sarver?

Lastly, when I spoke to the leadership for the Town of Prescott Valley after the initial announcement earlier this month, I was told there was a clause in the five-year deal they signed with the Suns called a “Force Majeure,” or in non-legal terms, unforeseeable circumstances that prevent someone from fulfilling a contract.

I guess the coronavirus fits the bill.

In the end, it was exciting to have professional basketball in the quad-city area, with memories that will last a lifetime. But, for me, I can’t just shrug my shoulders and say, “Well, that’s professional sports for you, it’s a business first.”

Why bother bringing the club to Prescott Valley in the first place? It’s not fair to anyone, including a community that welcomed them with open arms and supported them from day one.