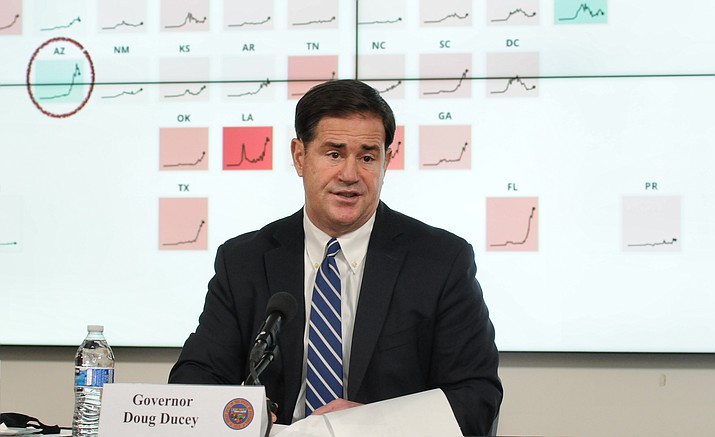 Gov. Doug Ducey discusses the trends in COVID-19 infections Thursday, July 16, 2020, as he extends his order barring evictions of those affected by the pandemic. (Capitol Media Services photo)

PHOENIX — Arizonans who can’t pay their rent because they’ve been impacted by COVID-19 will get a little more time before they face eviction.

But Gov. Doug Ducey won’t implement the latest recommendations from the Centers for Disease Control and Prevention recommending that Arizona further reduce restaurant capacity and limit crowd sizes to control the spread of the virus.

In a press briefing Thursday, July 16, the governor also said:

• He remains opposed to issuing a statewide mask-up order, saying that giving that option to local governments is a better alternative;

• The percentage of COVID-19 tests that come back positive — a figure that has pushed Arizona to the top nationally — will decrease as the state starts testing people who are not sick or showing symptoms;

• He is counting on Congress to approve another aid package, including extended unemployment benefits, meaning he does not need to decide now whether to boost state-provided payments which are the second lowest in the nation.

And both Ducey and state Health Director Cara Christ said the fact that the Maricopa County Medical Examiner’s Office has run out of space and has ordered refrigerator trucks to store bodies can’t be blamed solely on the pandemic.

But the most immediate effect will come from Ducey’s announcement that he is extending his order blocking people affected by COVID-19 from losing their homes. That protection, which had been set to expire this coming week, now goes through Oct. 31.

There will, however, be some additional conditions that renters need to meet.

Right now they need to provide evidence to the property owner that they have specific reasons for not paying their rent. These range from a requirement to be quarantined to job loss or reduction of income.

Under the new order, they also will have to certify to the landlord by Aug. 22 that they have applied for rental assistance from one of the state, county, city or private organizations that provide it.

That keeps the landlord at bay, even if the tenants don’t actually have the assistance by that time.

Ducey’s order also is designed to provide financial aid to at least some property owners, setting aside $5 million in grants.

“This will provide targeted relief to homeowners who rely on income from tenants to help them avoid foreclosure,’’ the governor said.

The new executive order does not spell out who is eligible. But aides to the governor said this is being crafted to be available only to those with one or just a few properties and not for owners of apartment complexes.

And Ducey said he is providing $650,000 to community agencies that are the ones who process applications for housing assistance.

Ducey said there is about $80 million available in such assistance. But the governor’s office said that distribution has been hampered because these community agencies, such as Chicanos Por La Causa and Wildfire, have not had the staff to process the applications.

Those additional dollars would be earmarked to make those hires.

Much of the rest of the briefing focused on the status of the virus in Arizona and how Ducey said many indicators show the situation is improving here. That includes fewer emergency room visits by COVID-19 patients and reports showing the rate of infection is declining here.

Still, Ducey acknowledged, the number of COVID-19 patients in hospital beds, including the ICU ward, is increasing. But the governor said he’s not interested in implementing the latest Arizona-specific CDC recommendations published earlier this week.

“Those are recommendations,’’ Ducey said when asked about it. And he said it has been less than a week since he issued an edict tightening up on a prior order limiting in-house dining. “We’re seeing the results that we’re seeing over the last two weeks,’’ the governor said. “So we’re going to continually monitor it.’’

Anyway, Ducey said, the issue is not strictly about numbers and percentages. “The key is to socially distance and make those responsible decisions,’’ he said.

All this comes as Maricopa County ordered up refrigerator trucks as the morgue hit its capacity of 150 bodies, something that hasn’t happened in a decade. Ducey said that does not mean his actions so far have been wrong.

“We are headed in a better trajectory,’’ he said.

Christ, for her part, said the situation with too many bodies can’t be blamed entirely on the pandemic.

Some of it, she said, is that more people die in the summer of heat-related issues. Still, Christ acknowledged, there is a link between COVID-19 and the increased death rate -- and not just that people are dying of the disease.

“We are seeing an increase in drug overdose and in suicide, not just here in Arizona but nationally,’’ she said. And some of that, Christ said, could be associated with the isolation and loneliness as travel and visitation is limited.

“That is one of the things we were worried about,’’ she said.

The timing Ducey’s announcement of extending his anti-eviction order comes as the extra $600 a week in unemployment benefits provided by the federal government is set to expire at the end of the month. Unless extended, that leaves those out of work with only state benefits which are capped at $240 a week, the second lowest in the country.

But Ducey sidestepped questions about seeking an increase in state benefits, something that would require legislative approval, saying he hoping not to have to deal with that.

“This is something we’ve been talking with the (congressional) delegation about, talking with the White House about,’’ he said. And the governor said he’s counting on another financial relief package coming out of Washington.

“We’re not exactly sure what it’s going to be,’’ Ducey said.

The increased number of COVID-19 patients in Arizona hospitals has not yet maxed out total bed capacity in the state. But Christ acknowledged there are staffing issues.

She said the state is inking a contract with a private firm to provide 584 nurses to 21 hospitals, more than half of those who are critical-care nurses who can staff ICUs. Christ said there will be some preference for facilities in rural areas in efforts to keep patients as close to home as possible.