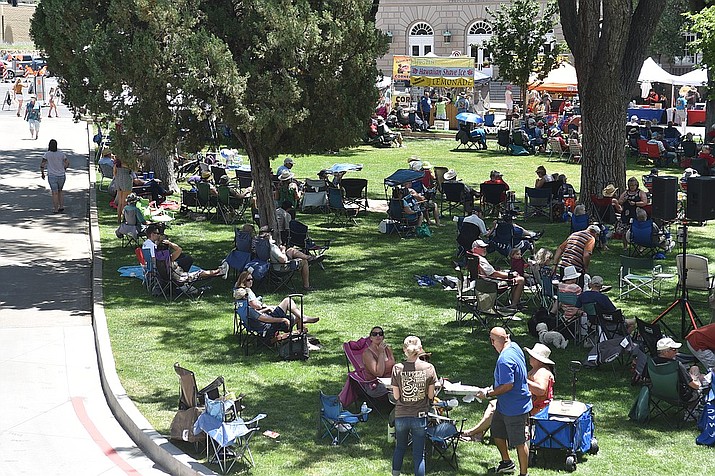 Few attendees of the Prescott Bluegrass Festival, June 27-28, 2020, wore face masks to combat the spread of COVID-19; however, most did socially distance from others on the courthouse plaza in downtown Prescott. (Jesse Bertel/Courier, file)

Prescott-area officials have taken a consistent stand on face masks during the COVID-19 pandemic: They strongly encourage them, many don masks themselves, but they don’t mandate them.

The result: Most people do not wear masks at public events.

That point became obvious over the July 4 weekend, when a number of national media outlets featured Prescott and its largely non-mask-wearing holiday crowds.

It also was a major theme of the City of Prescott’s Tourism Advisory Committee during a livestreamed meeting on Wednesday, July 8.

Several committee members pointed out that the majority of the people attending recent public events, such as the June 27-28 Prescott Bluegrass Festival in downtown Prescott, did not take the advice from the city and county to wear face masks.

“At the Bluegrass Festival, most people did not wear masks,” said Robert Coombs, visitor information manager for the Prescott Chamber of Commerce. “I would say 97% of them were not wearing masks but were social distancing.” 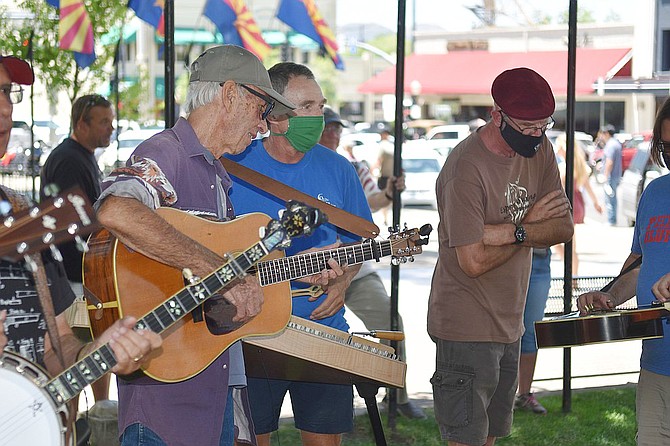 Coombs added that the festival organizers passed out face masks to attendees, but many people who accepted the masks put them in their pockets rather than on their faces.

Committee member Jim Dawson agreed: “Nobody was wearing masks. Downtown Prescott doesn’t seem to be any different than it was last year.”

Currently, the quad-city area is largely unique in its non-mandate for face masks. Surrounding communities such as Flagstaff, Cottonwood, Jerome, Sedona, Phoenix, and Kingman all have some form of face-mask mandate in public.

Likewise, surrounding states of California, Nevada, and New Mexico have all mandated face masks in public.

This week, an article in the New York Times characterized Arizona as the worst in the nation, and possibly in the world, for per-capita cases of new COVID-19 infections.

And a July 8 Capitol Media Services article in The Daily Courier reported that there were nearly 27,000 new confirmed cases in the state in the most recent seven-day period available.

That translates to nearly 3,700 new infections this past week for every 1 million Arizona residents, the article stated.

Still, leaders in the area continue to support their original direction of not requiring masks in public.

Although Orr said she regularly wears a mask while she’s out in the public, she said, “We should all be doing this on the side of personal responsibility.”

Orr maintains that a mandate would be difficult to enforce, especially with the limited police officers available to handle law enforcement matters.

“I don’t like the idea of mandating when we can’t really enforce,” Orr said. Rather, she said she believes government officials should lead by example.

“If we made it mandatory, what difference does it make?” he asked when posed with the question about a face-mask mandate. “Who’s going to enforce it?”

Brown said he did an informal count of people wearing masks at downtown-Prescott events over the July 4 weekend. He maintains that about 30% of the people were voluntarily wearing masks at public events, and he believes another 40% tend to carry a mask in their pockets for times when they cannot social distance.

“I was hoping there would be more (wearing masks),” Brown said. “But there was social distancing.”

Several of the Prescott Tourism Advisory Committee members suggested that, short of a mandate, the community should initiate a public campaign to make the wearing of masks “cooler.”

On July 7, for instance, the city’s Facebook page posted Arizona Department of Health Services Director Cara Christ’s statement, “We urge every Arizonan to follow Gov. (Doug) Ducey’s executive orders to contain the spread and take simple precautions, such as wearing a face covering when out in public and avoiding gatherings of people, to prevent the further transmission of COVID-19.”

The city has also been promoting the #MaskUpAZ campaign, Heiney said.

HOW MUCH DO MASKS HELP?

Opinions vary among local officials on how much the wearing of masks helps to stem the spread of COVID-19.

Orr said she believed that the masks would help only the wearer until her doctor informed her that face coverings help stem the spread both for the wearer and for those around the mask wearer.

Brown contends that face masks are helpful only for the people around you, but do little for the wearer.

The Centers for Disease Control and Prevention’s statement on the matter is: “To reduce the spread of COVID-19, CDC recommends that people wear cloth face coverings in public settings when around people outside of their household, especially when other social distancing measures are difficult to maintain.”

It adds: “Cloth face coverings may help prevent people who have COVID-19 from spreading the virus to others. Wearing a cloth face covering will help protect people around you, including those at higher risk of severe illness from COVID-19 and workers who frequently come into close contact with other people (e.g., in stores and restaurants).”

But Brown questions how much the face mask mandate has done for other Yavapai County communities. “It’s not doing any good in Cottonwood, Jerome, and Sedona; their numbers are the same,” he said.

He and Orr both say they continue to follow the lead of the state on the matter. “To mandate – we’ll see what happens at the state,” Orr said.

Brown added, “We’re following everything the state is mandating. This is a call for the state to make, not the local jurisdictions.”