Prescott Valley police continue to monitor drug overdoses
Out of 9 calls since May 21, 2 deaths and 4 successful NARCAN treatments 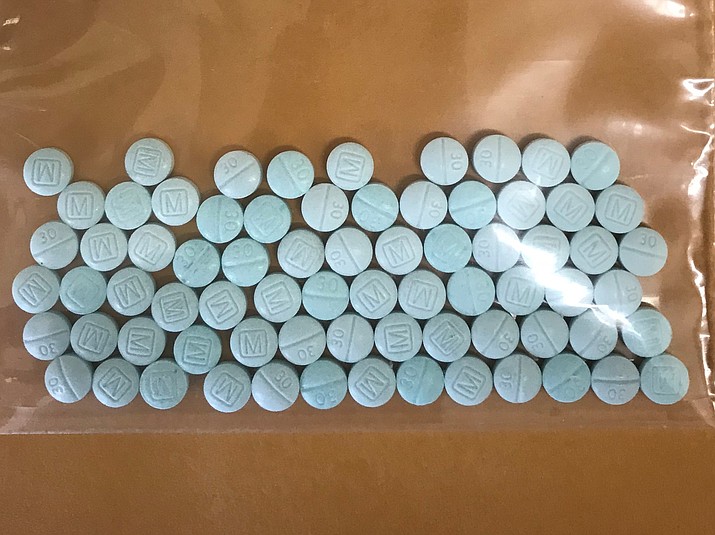 Fentanyl pills found hidden in a Cottonwood man’s rectum as he was being booked into the Yavapai County jail in Camp Verde. (YCSO/Courtesy)

Prescott Valley police on July 2 reported that they have received nine calls for drug overdoses, which included two deaths, since May 21, and are continuing to monitor the situation.

Police said that they and the Partners Against Narcotic Trafficking Task Force (PANT) recently “made significant arrests” of suspects tied to the use and sale of illicit drugs, such as fentanyl.

However, a department news release added, “there is still too much availability of these deadly items on our streets and in our communities.”

“It’s not out of the norm; it’s ongoing,” Prescott Valley police spokesperson Jerry Ferguson said July 7 regarding drug abuse in town. “Every four to five weeks we are going to give the community updates.”

Of the nine overdose calls, police say they administered the narcotic overdose treatment NARCAN five times and saved four people’s lives. Police added that they found drugs such as fentanyl pills, methamphetamine, Percocet, heroin and melatonin during the incidents.

The Prescott Valley Police Department has been working with PANT and has a sergeant involved with the organization, Ferguson said.

One of PANT’s arrests for fentanyl came on June 25, when PANT detectives arrested 44-year-old Cottonwood resident Jerry Allen on charges of possession of narcotic drugs for sales, possession of drug paraphernalia, and promoting prison contraband.

During detainment at the county jail in Camp Verde, the Yavapai County Sheriff’s Office reported that it found 73 fentanyl pills in a bindle baggie in the suspect’s rectum. Authorities later released Allen from the county jail on a $10,000 bond.

“Drug dealers are always manufacturing pills containing fentanyl to look like legitimate medication,” the Prescott Valley Police Department added in its news release. “Do not take non-prescribed medication or medicines from unknown sources.”

Officers are reminding the public that unused or unneeded prescription medications may be safely deposited at the Walgreens pharmacy at 2880 N. Centre Court in Prescott Valley.

If you or someone you know has a drug problem, options are available, police add.