Haddad: Measuring everything with a political ruler can sink the ship 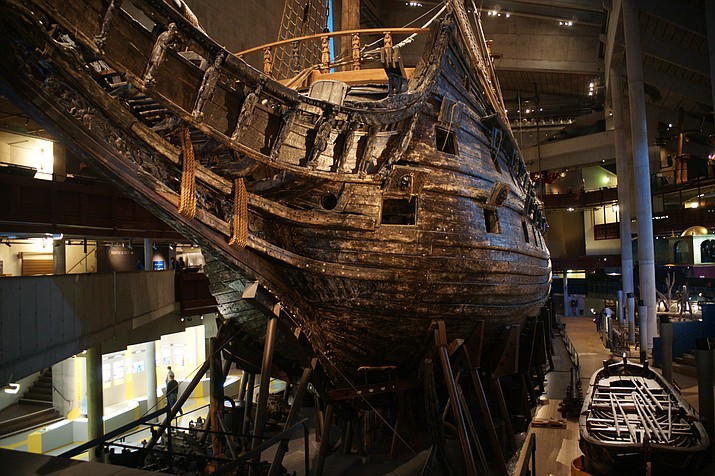 A view of the bow of the Vasa, a 17th-century Swedish warship which sunk on its maiden voyage. The ship is on display at the Vasa Museum in Stockholm, Sweden. Researchers raised the wreck in 1961. (Photo by Javier Kohen, CC 3.0 license, https://bit.ly/3e3348r)

On August 10, 1628, the Swedish warship Vasa set sail on her maiden voyage. At the time, she was the most powerfully armed warship in the world, carrying 64 bronze cannons on two gun decks. The wooden warship was a breathtaking sight. It was a work of art, especially its stern, which was covered with hundreds of beautifully painted wooden sculptures. Twenty minutes into her journey the ship sank, killing 30 people.

Less than a mile into its voyage the ship had been hit by two strong winds causing it to heel to port and fill with water. An inquest concluded the ship had been unstable. The reasons behind the instability have remained a mystery over the centuries.

Despite its unfortunate end, Vasa sank in waters that preserved the ship. Since it was recovered in 1961, Vasa has provided a rare glimpse of life in the 17th century. In recent years researchers have conducted detailed examinations of the nearly 400-year-old vessel, measuring every piece of the wood. Their meticulous measurements have paid off. We now have two important new clues as to why it sank.

WHAT SANK THE SHIP?

From what researchers have uncovered, the cause of the deadly Vasa disaster appears to be twofold.

First, there was more ship structure on the port side of the hull than on the starboard side. Un-ballasted, the ship would probably heel to port. This explains why the Vasa tipped to the port side when the winds hit. Aboard, archaeologists discovered four rulers the workmen had used that may explain the lopsidedness. No two rulers were exactly alike. They were based on different standards of measurement at the time. Two were in 12-inch Swedish feet, and two were in 11-inch Amsterdam feet, with the inch lengths also being different. Each carpenter had used his own system of measurement. The length variations are visible throughout the ship, even in the timbers.

A CHANGING MEASURE OF RESPECT

Too many people in the United States are dead set on building with a measuring unit scaled only by their political party. The most extreme of these politically-obsessed people on both sides of the aisle consider their ruler the only correct standard. This is causing our nation, and our community, to be dangerously lopsided.

In turn, if everything we allow politicians to build is about show instead of substance, or ego instead of equality, the vessel will topple when the winds blow.

This closed-minded, divisive attitude is also changing what is considered acceptable behavior in the way we communicate and how we treat one another. Too often, if someone disagrees with another’s opinion or politics they now feel it is acceptable to viciously attack, accuse or demonize rather than respectfully discuss solutions and seek compromise. And sadly, the behavior and examples coming from some of our national leaders and celebrities deem such attacks as acceptable measures of behavior.

Common sense standards of behavior such as respect for others, civility, courtesy and moral character used to provide ballast to keep us balanced and moving forward as a nation. Like the Vasa, if we measure everything with the notches in our personal political stick this country will become more unstable and we may find ourselves capsized — either by our own doing or by an enemy lying in wait.

Also like the Vasa, much of society seems to be more concerned about what is popular, feels good, satisfies selfish appetites, or what can be seen above the surface instead of what is right or good for the well-being of others and the community as a whole.

It’s time to put away the inflexible measuring stick of party politics and pick up the ruler marked with integrity, respect, compassion and unity.

No matter what or who is popular, trending or what may rank high in current public opinion polls, the best measure we have on how to treat one another is the standard of the Golden Rule, to treat others the way we would like to be treated.

For those who grip it tightly with an angry, offended fist, it’s time to put down your stubborn rule of measure and work with your neighbors to keep us afloat and on course.

Editorial: Titanic's story is a lifelong fascination
21 positive for coronavirus on cruise ship off California
Deep-sea explorers find Japanese ship that sank during WWII
Titanic director Cameron backs bid for 5,500 items from ship
Over $1B worth of cocaine intercepted at Philadelphia port
Event Calendar