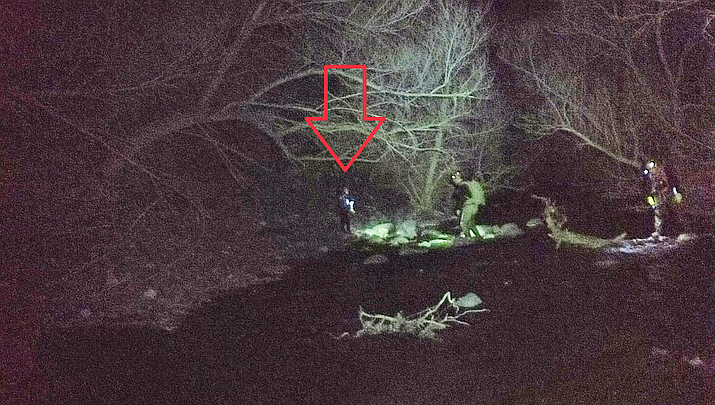 Search and rescue volunteers with the Yavapai County Sheriff’s Office (YCSO) were able to find a lost hiker without issue late Monday night, Jan. 27, thanks to the hiker having a charged cellphone with good enough service to call for help.

Search and rescue volunteers with the Yavapai County Sheriff’s Office (YCSO) were able to find a lost hiker without issue late Monday night, Jan. 27, thanks to the hiker having a charged cellphone with good enough service to call for help.

The 37-year-old hiker called 911 just before 9 p.m., saying she was alone in a remote area outside of Black Canyon City, according to a YCSO news release. She said she had no food, water, or supplies, including a flashlight to navigate the dark.

Based on her call, emergency dispatchers were able to obtain GPS coordinates. A YCSO Forest Patrol deputy then called out the backcountry unit from the Yavapai County Search and Rescue Team.

While the backcountry volunteers were responding, the lost hiker was instructed to stay where she is.

“This direction was critical to prevent risk of injury if she was to continue and try to self-rescue,” YCSO spokesperson Dwight D’Evelyn said in the release. “And staying in one place gave rescuers a non-moving target to focus their rescue coordination effort.”

Although cell service was spotty, dispatchers and deputies were able to check on her periodically, D’Evelyn said.

The full search effort, which utilized multiple access points based on the GPS coordinates, was underway before midnight and resulted in searchers finding the woman around 1 a.m., the release states. She was escorted out safely, checked by medics from the Daisy Mountain Fire Department and released.

D’Evelyn said some key lessons can be drawn from this ordeal.

“Never hike alone,” he said. “But if you do, never leave without telling someone where you are going, the intended route, how long you will be gone and your expected return.”

Outdoor recreationists should also make sure to carry the appropriate equipment for current and expected weather and terrain, as well as adequate communication devices, such as a fully charged cell phone, GPS, 2-way radio and/or location transmitter.

If you find yourself lost or in trouble, stay put and call for help, D’Evelyn said.