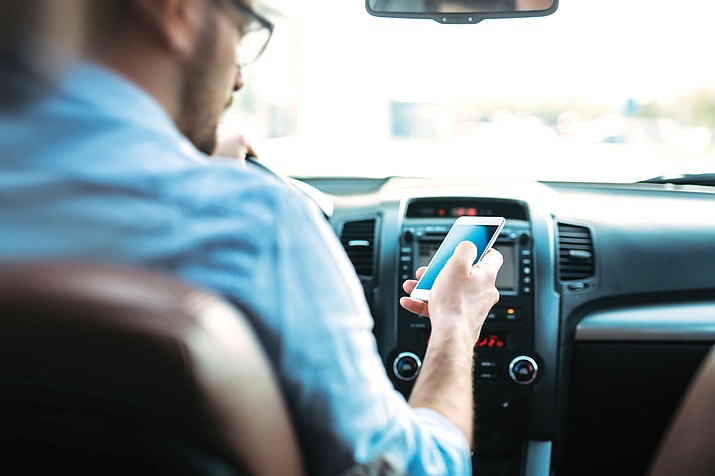 Prescott Valley Police Chief Steven Roser said getting drivers to comply with the hands-free law is a big deal when it comes to the safety of the general public. (Courier stock photo)

By this time next year, texting while driving will be illegal throughout all of Arizona.

The ban, which was signed into law by Gov. Doug Ducey in April 2019, is set to take effect on Jan. 1, 2021. It “prohibits all drivers from engaging in distracting activities including reading, writing and sending messages” with a handheld device while their car is moving. There are exceptions, including calls to a doctor or to 911, and use of hands-free devices to make a call or send a voice-generated text.

Since the signing of the bill, troopers with the Arizona Department of Public Safety (AZDPS) have issued more than 7,300 warnings to those driving on Arizona highways.

But the effort to change people’s driving habits began well over a year ago in Yavapai County.

First to pass a distracted driving ordinance was the county Board of Supervisors in October 2018. Prescott passed a similar ordinance weeks later, followed by Chino Valley, Dewey-Humboldt and Prescott Valley.

The law enforcement agencies in each of the local jurisdictions started by issuing warnings — just as AZDPS troopers have been doing — to educate the public on the changes, but most began giving out tickets as of January 2019.

Following are what those agencies issued in 2019:

Prescott Valley Police Chief Steven Roser said getting drivers to comply with the hands-free law is a big deal when it comes to the safety of the general public.

“We’re talking about the lives of innocent individuals being lost because someone wasn’t paying attention while they’re driving down the roadway,” he said.

Coupled with enforcement has been an ongoing marketing campaign to bring attention to the dangers of distracted driving.

“We’ve done a series of social media posts as well as handed out printed brochures at City Hall and the Police Department,” said John Heiney, the community outreach manager for the City of Prescott.

Commercials sponsored by the Central Yavapai Metropolitan Planning Organization have also been airing on cable television. Each brings attention to various ways distracted driving is a concern. To view these commercials, go to https://www.d3arizona.org.