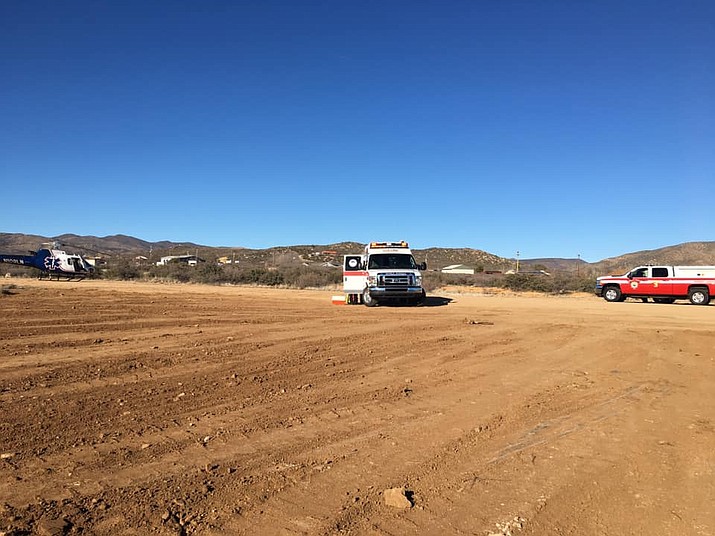 A man with a gunshot wound had to be helicoptered from Highway 169 in Dewey to a level 1 trauma center in Phoenix on Thursday, Jan. 23, 2020. (CAFMA/Courtesy)

A man with a gunshot wound to his stomach died after being transported from Dewey to a Phoenix-area hospital Thursday afternoon, Jan. 23, according to officials.

Deputies with the Yavapai County Sheriff’s Office (YCSO) received word of the injury at around 3 p.m. and were dispatched to an area off South Orme Road about 1 mile from Highway 169.

When they found the injured man, later identified as 58-year-old Gerald Weglin of Dewey, they contacted the caller, who reported finding Weglin lying on the ground already injured, according to a YCSO news release.

Paramedics with the Central Arizona Fire and Medical Authority (CAFMA) arrived and stabilized the man. Life Line Ambulance then drove Weglin to a dirt lot along Highway 169, where a Native Air helicopter landed to transport him to a Level 1 trauma center in Phoenix, said Travis Smith, a CAFMA battalion chief.

Before Weglin was airlifted, a deputy briefly spoke to him to find out what had happened, the release states. He said he shot himself accidentally.

Deputies secured the scene and recovered a handgun from the victim’s truck parked about 40 feet away from where he was found, the release states. They believe it to be the weapon that caused the fatal injury.

“There is no indication at this time that anyone else was present at the time of the shooting,” Dwight D’Evelyn stated in the news release.

The incident remains under active investigation to gain further information on the victim’s background and timeline of events for the day.

D’Evelyn said next of kin have been notified.

Editor's Note - this story has been updated with Saturday's release of the victim's name, according to the Sheriff's Office.