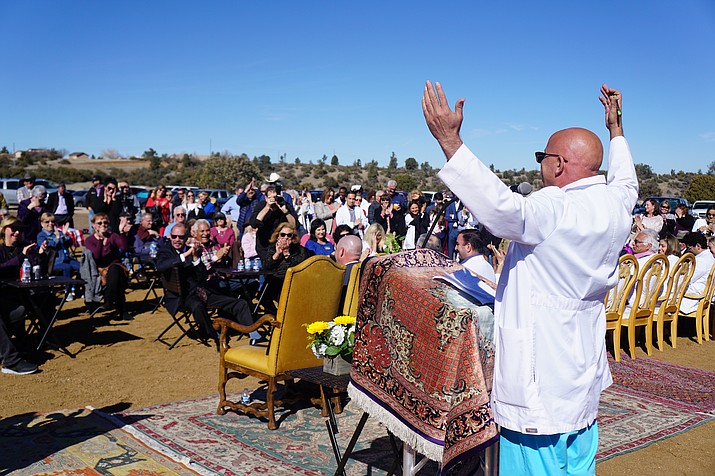 Dr. Hojat Askari speaks to a crowd of more than 200 people during a groundbreaking for his Whispering Rock project in northeast Prescott Thursday, Jan. 23, 2020. The medical-complex project, located along Willow Creek Road across from Embry-Riddle Aeronautical University, is still awaiting word on whether Banner Health will use a portion of the parcel to build a hospital. (Cindy Barks/Courier) 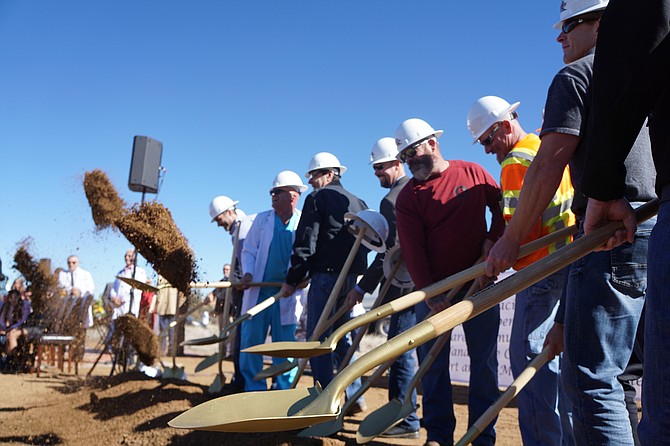 Members of the contractor and engineering team participate in a ceremonial groundbreaking for the new Whispering Rock project along Willow Creek Road in northeast Prescott on Thursday, Jan. 23, 2020. The groundbreaking event attracted more than 200 people to the site that is located across from Embry-Riddle Aeronautical University. (Cindy Barks/Courier)

More than 200 people gathered on a patch of former ranchland along Willow Creek Road this week to welcome a coming transformation of the parcel to medical uses.

The Prescott Chamber of Commerce conducted a groundbreaking on Thursday, Jan. 23, for Prescott Whispering Rock — a project that promises medical-office space, a food court, new homes and a hotel/conference center on a 79.2-acre parcel across Willow Creek Road from Embry-Riddle Aeronautical University.

Still to come is confirmation on whether the space will also accommodate a new Banner Health Hospital and MD Anderson Cancer Center.

Dr. Hojat Askari, a local doctor who is spearheading the project, said after the groundbreaking that the latest word from Banner Health was that the company is still doing its “due diligence.” Banner will likely conduct its own announcement and groundbreaking after a final decision is made, he said.

Askari, who got city approval in November 2019 for the zoning designation (Business Regional) that would allow for a 71-foot-high hospital (with a height variance), has said that Banner Health is interested in locating a new 156-bed hospital on 20 acres of the Whispering Rock land.

The fact that Banner has yet to confirm its plans did not dampen the spirits at Thursday’s event, which included numerous accolades for Askari’s efforts.

The groundbreaking attracted representatives from the offices of U.S. Sen. Krysten Sinema, Congressman Paul Gosar, the Yavapai County Board of Supervisors, the City of Prescott and the Prescott Chamber of Commerce.

The speakers emphasized the need for more health-care options in the Prescott area.

Yavapai County Board of Supervisors Chairman Craig Brown stressed the growing health care needs of Prescott’s aging population. To prove his point, he asked how many of the audience members were 30 or 40 or younger. Few people in the audience raised their hands.

The groundbreaking occurred in the flat area at the front of the parcel, and Prescott Mayor Pro Tem Billie Orr pointed to the spine of Granite Dells that served as the backdrop for the event.

“If you look behind us, you will see an amazing outcropping of granite rocks, and those rocks were donated to us by Dr. Askari,” Orr said. “Twenty-five amazing acres in which we will be allowed to build trails.”

As a part of the development agreement for Whispering Rock, Askari dedicated the Granite Dells portion of the parcel to the city.

Former Prescott Mayor Marlin Kuykendall pointed out that the need for additional medical care in Prescott has been a long-term effort.

“I think there were four doctors when I came here,” Kuykendall said of the medical scene when he arrived in Prescott in 1963. “It seemed like we were always interviewing, visiting and trying to attract more doctors.”

He also offered a historical perspective on the Whispering Rock land, which previously served as the Rifle Ranch. While he was helping Askari with the preliminary work on the project, Kuykendall said he and others visited the site. The wind was whispering through the Granite Dells at the time, he said, and it served as inspiration for the project’s name.

Askari said after the groundbreaking that he plans to move ahead with 40,000 square feet of medical-office space, 30 residential homes, a one-acre food court and a possible hotel/conference center.

City Community Development Director Bryn Stotler said a number of approvals are still needed before full construction can begin on the project.

Although the City Council approved the rezoning from Business General to Business Regional in November, Stotler said the hospital would still require a height variance from the city to allow for the 71-foot height.

The city has yet to receive an application for the variance, she said. Once the application is filed, the variance would have to go the Planning and Zoning Commission and the City Council for approval.