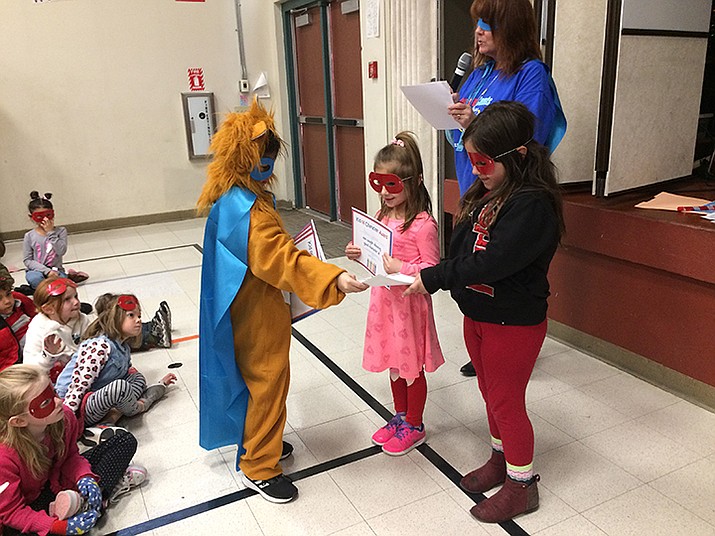 Lincoln Elementary School Principal Karen Hughes, left, cheers her students for their “awesome” good character traits as teachers and volunteers showcase the six pillars of good character on decorated signs behind her. On the screen was one of the themes of the day. “Good Character Is Our Super Power.” (Nanci Hutson/Courier)

Lincoln Elementary School Lions celebrated a superhero “Character Counts” assembly this week where every student from kindergarten through fourth grade was encouraged to reflect on how they embrace the six-pillars of character: responsibility, respect, trustworthiness, caring, fairness and citizenship.

“Good Character is one Super Power,” an overhead screen announced to students, faculty and staff and parents attending the hour-long assembly.

Dressed in different color capes and masks, students filed in the gymnasium where they were feted for their willingness to incorporate character traits into how they treat their peers on the playground, how they talk to a teacher in class or how they act on the school bus or behave in the community.

Principal Karen Hughes treated them to an episode of “Kid President,” a children’s video that shows a young lad demonstrating good character and encouraging his viewers to do likewise because, as he declared, “you have everything you need to inspire the extraordinary.”

At the assembly, several students in each grade were honored with awards for their good character, including several awards for sportsmanship. They are the following: