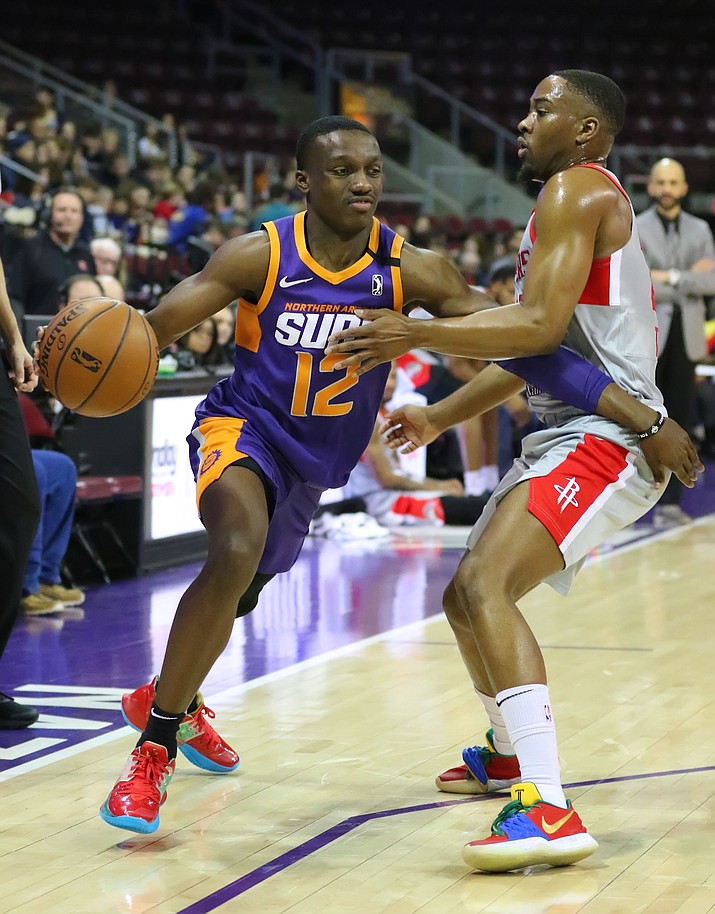 Northern Arizona Suns guard Jared Haper (12) dribbles past a defender during a game against the Rio Grande Valley Vipers on Tuesday, Jan. 21, 2020, at the Findlay Toytota Center in Prescott Valley. (Matt Hinshaw/NAZ Suns)

As expected, the children were loud, excited and overflowing with energy. However, the Suns didn’t match their energy as they fell to the Vipers 125-114.

This marked the third game in the Suns’ four-game season series against the Vipers. And despite taking the first two contests, the Suns couldn’t keep pace on Tuesday as the Vipers broke the game open in the second half, which has been a common theme for the Suns this season.

“What’s not on the stat sheet is energy, and [the Vipers] play with a ton of it,” Suns’ coach Bret Burchard said. “They played aggressive, they played hard and we struggled to match that until the early part of the fourth quarter.”

The lack of energy from the Suns might have been due to an 11 a.m. tip-off time, which is their earliest of the season. It didn’t seem that was case in the first quarter though as the Suns took a 21-14 lead thanks to a few buckets from guard Jalen Lecque, Tariq Owens and Ahmed Hill.

The Suns ran their offense to a tee in those early stages but things took a turn when the Vipers went on a 9-2 run to even the game at 23. After tightening up their defense, the Vipers forced the Suns into a slew of turnovers and only committed 14 turnovers by the end the game compared to the Suns’ 23.

Aaron Epps knocked down a three-pointer to pull the Suns within two at the end of the opening frame. But the Vipers slowly began to grow their lead in the second quarter when William Howard and Jacobi Boykins caught fire.

By halftime, Howard and Boykins had already racked up 18 and 14 points, respectively. Boykins, in particular, helped the Vipers break the game open when he hit two back-to-back shots from downtown to cap off an 8-0 run at the end of the half.

Coming out of the break, the Vipers continued to take control of the game as the Suns’ sluggishness really began to take a toll in the third quarter. On the bright side, two-way player Jared Harper — who had a relatively quiet first half — got into rhythm and eventually recorded his seventh straight 20+ point game, surpassing Archie Goodwin for most in team history. Much of that was due to him draining three straight threes toward the end of the game as he finished with a team-high 24 points, six rebounds and four assists.

Nwamu then splashed a three-pointer to spark a 13-0 run to make it a 115-100 game with just under five minutes left. However, the Vipers managed to put an end to the bleeding and eventually secured the victory.

“We just didn’t play as hard as we should’ve played. It’s just all about effort,” said Epps, who tallied nine points and seven rebounds.

Both teams weren’t great from beyond the arc as the Suns shot at just a 28% clip while the Vipers shot 29.2%. The crazy part is that they took a combined 91 three-pointers, which is abnormal even in today’s pace-and-space era.

This marks the third annual Kids Day Game in Northern Arizona Suns history. Thousands of students from schools across the quad-city area filled the Findlay Toyota Center to watch the Suns play and learned valuable lessons about health and a variety of subjects.

The lessons were frequently played on the big screens throughout the game and featured Suns players and staff members. All students also received an interactive workbook and a free lunch.

The Suns now have a 1-2 record on Kids Day Games.