All About Pets: Final decisions - It is never easy! 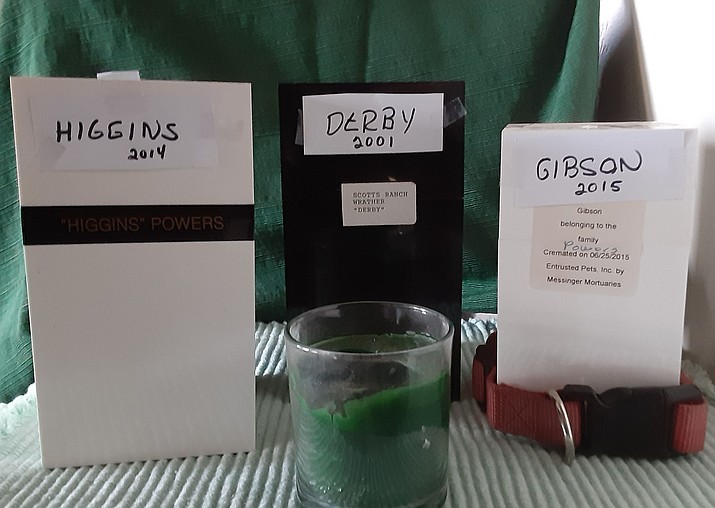 Cremation allows these best buddies, Derby, my first poodle, Higgins, and Gibson, to stay present in my heart and home. (Christy Powers/Courtesy)

Having heard from several people recently who, sadly, have lost their dogs, I want to discuss those final-decision issues: How to deal with letting go.

We have all faced this difficult situation and we need to be prepared emotionally, since our lifespan is considerably longer than that of our pups.

Naturally, you want to have a good relationship with your pet’s veterinarian, one who you totally trust and someone with whom you can share concerns. And one who will guide you through the important steps of keeping your pup comfortable and happy as the end draws near.

There is so much to consider when making those final arrangements. One friend of mine had a wonderful plan. She and her husband, the family’s other dog and their parrot all gathered around while the vet, who came to the house, administered that final injection.

Some years ago, my previous poodle, Higgins, was doing very strange things and stood staring into the corner. It was my first experience with a dog with dementia.

During his 14 years, he never took anything out of the trash. One day, he coughed up something that turned out to be a handkerchief that I had thrown away. His behavior become increasingly more erratic, and I was worried for his safety, so I brought him for his final visit. The vet told me that dementia is not that uncommon in dogs, but many dogs do not live long enough to show symptoms.

I learned an important lesson when I brought Higgins in that day. I had three dogs at the time, and I took Higgins away and when I came home without him, Gibson and Lacy were confused and sad, and continued looking for him. So when I later had to bring Gibson in, I brought Lacy with me so she would know that he was gone. I know that she was also aware that he was in failing health.

I so remember my dear vet from Payson telling me that when a dog is in pain, he will not eat. It is surely the only thing I disagreed with him about, since my boy, Gibson, who could no longer easily walk or stand, would remind me when it was meal time and still beg for his nightly Kong. I remember so clearly, him putting his paw on my knee, and with his wonderful eyes, telling me that it was Kong time. A few days later, I had to let him go.

Mack, who was featured in a September column about adopting an older dog, was doing very strange things besides having increasingly severe seizures and other health issues. Besides some dementia, he finally could no longer could stand up. His vet was willing to come to the house.

Mandy, the blind gal who I featured in a column when she was having problems with dogs attacking her service dog, Nezzie, contacted me recently. She lost her retired service dog and shortly after, Nezzie became seriously ill and died. Nezzie was not that old. Mandy was devastated, not only from the loss of her two pals but also by the loss of her independence. Just heard that she has a new service dog that she totally loves.

One thing I read recently is the importance of staying with your pet while that final injection is being administered and until the vet confirms that he is gone. Your buddy is very aware of your presence until the very end.

One of my strong objections is the phrase: “putting him down.” I much prefer the words: “Letting him go.”

Wanting to keep their memories alive, all my guys have been cremated. If not present in body, I do have them with me forever. That is very comforting.

Christy Powers is a freeance writer whose passion is studying and writing about pet health, nutrition and training. She can be reached at cpowerspak@gmail.com.