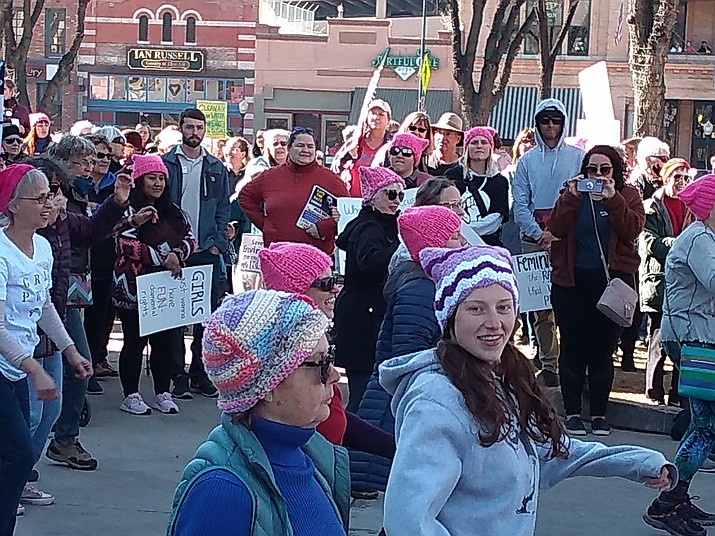 Hundreds of people gather outside of the Yavapai County Courthouse to march and celebrate women at the Prescott Women’s March on Saturday, Jan. 18, 2020. (Jesse Bertel/Courier)

They want change and they want it now.

That was one of the rallying cries at the beginning of the fourth annual Women’s March at the courthouse plaza Saturday afternoon, Jan. 18.

Hundreds participated and it feels good after four years to keep having a good turnout, said Maria Lynam, one of the organizers on the committee for the march. The march brings progressives involved in social causes together once a year, she added.

The reasons everyone marched Saturday afternoon were varied, Lynam said. Those reasons include science and showing that climate change is real; equal rights and protections for women and members of the LGBTQ community; education by investing in children and all levels of schooling; a strong economy where people get fair wages, worker security and paid family leave; transparency and protecting people from the hidden hand of special interests and dirty money; fairness and approving participation in the voting process; equal opportunity where everyone in urban, rural and suburban communities has the right to earn a living, obtain affordable housing and love the way you want; and sensible gun protection such as background checks and red flag laws, Lynam said.

Kathleen Horn said her reasons for marching were empowering women and because she is unhappy with President Donald Trump.

“I’ll just pick today’s headline. So, today, I saw that he wants to roll back all the wonderful changes that Michelle Obama made in school lunches and he wants to bring back hamburgers, pizza and French fries,” Horn said. “I’m against that. I’m against a lot of things he does.”

This was Horn’s third year marching in the Women’s March and has also participated in the Coachella Valley Women’s March in Palm Springs.

Also marching was Deb McAninch, who brought up the Equal Rights Amendment that recently passed in Virginia. It could be passing nationally, McAninch said. 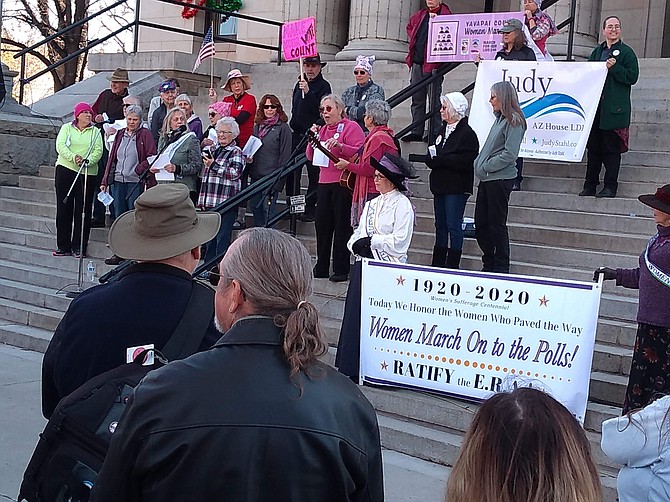 Many different groups and political advocates gather at the Prescott Women’s March to share their message on Saturday, Jan. 18, 2020, on the steps of the courthouse. (Jesse Bertel/Courier)

“I think it’s a good time to remind people that women don’t have equal rights,” she said, adding that she participated in the first national march in Washington, D.C., in 2017 as well. “It’s great that Prescott, being as conservative as it is, that there’s a lot of people out here who aren’t happy with the status quo.”

The Prescott Women’s March participants weren’t the only people on courthouse plaza Saturday afternoon. There were some counter-protesters standing on an opposite corner, showing their support for Trump.

One of the counter-protesters was Carolyn Dias, who recently moved to Prescott from California. The Women’s March was not what she originally thought it was. “What I originally thought the Women’s March was was for women’s rights. What it turns out to be is an anti-Trump hate rally,” she said. “It really doesn’t do them much good so we’re out here supporting our president, supporting our Constitution, supporting our right to stand out here just like they are the resistance.”

Another one of the counter-protesters, Sandra Downs, voiced her support for Trump because of what he has done and all he will do. Nobody can buy him, Downs said.

There was also Dan Elkins, who said that those marching in the Women’s March want outrageous things. They want extra rights, Elkins said, bringing to attention his sign about the Equal Rights Amendment that called it the “Extra Rights Amendment.”