Veteran saves beloved dog that pulled him out of deep depression 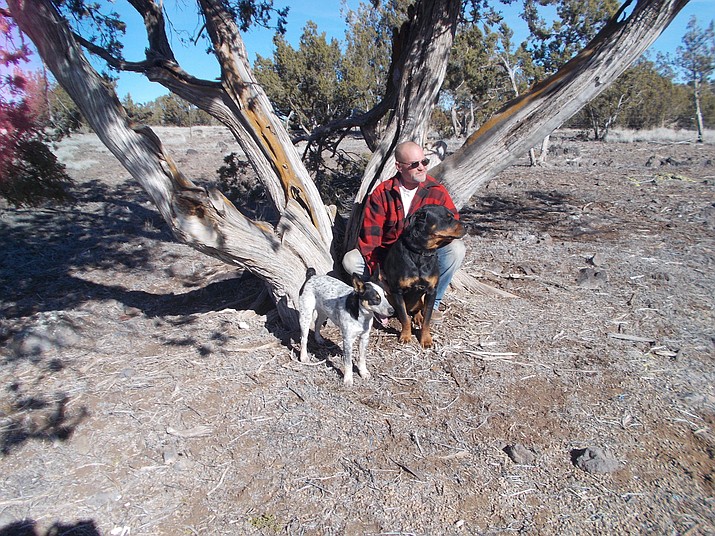 Ron Alexander with his Rottweiler, Miya, and his Blue Heeler, Jack, at his home in Ash Fork on Jan. 13, 2020. Alexander rescued Miya after she was trapped under a rock for several days. (Courtesy)

After his wife of 17 years was killed in a car crash 3 years ago, Ron Alexander essentially gave up on life.

“I was so, so depressed that I wouldn’t eat, sleep or drink,” 61-year-old Alexander said.

This continued for about 2 weeks, in which time he lost about 28 pounds.

The disabled Marine Corps veteran was nearing his last breath when his 2-year-old Rottweiler, Miya Lee, showed him there was still something to live for.

“She literally dropped a bottle of water on my lap,” he said. “She was grabbing me by my pant leg and was giving me those little loving eyes that inspired me to get back up. She saved me.”

Soon after, Alexander sold everything he owned and moved to Arizona from his home in Bellingham, Washington.

He eventually bought a 10-acre property about 1 mile south of downtown Ash Fork and was able to start fresh with Miya by his side.

Miya got into the habit of taking walks around the property on her own. She’d usually return within an hour of leaving the house, but something went wrong on Dec. 31, 2019.

Around noon that Monday, she decided to chase after a rabbit. Alexander didn’t think much of it until the temperature started to drop along with the waning sun.

“It gets so cold here that a bottle of water will freeze solid as a rock,” Alexander said.

He spent hours that night calling her name.

As soon as daylight broke, he and some friends devoted every waking hour looking for his missing companion.

“We went for miles all over,” he said.

The search continued each day that week. By the time it got to Friday, Alexander was nearing the end of his rope.

“I came so close to giving up,” he said.

But in his final attempt to scour the wild countryside with his other dog, a blue heeler, he heard what sounded like a faint whimper in the distance.

He tracked the source and found Miya about 800 yards from his home. Her head was trapped under a boulder, but she was still breathing.

“I had a hard time, but I pulled this large rock off of her and she sprung right back up onto her feet,” he said. “It was just a miracle she was alive.”

He quickly drove her to his house and started nursing her back to health with tiny bits of water, Gatorade and food.

Looking her over, he noticed her hind legs appeared a little frostbitten and she had a giant hole in her chest.

“She had ripped her chest open laying on those rocks and struggling to get out,” he said.

He suspects she chased the rabbit she was after into the berm of rocks and one of the rocks fell, pinning her to the ground for four long days.

Fortunately, the 5-year-old service dog is tough and recovers quickly.