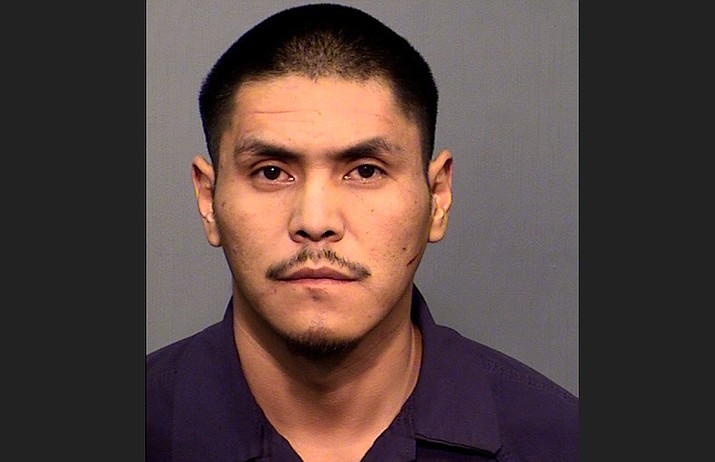 Authorities have arrested a New Mexico man accused of assaulting his girlfriend and then running from police early Wednesday morning, Jan. 15.

At about 1:45 a.m., a 28-year-old woman called from a landline at the Pilot gas station in Cordes Junction to report her boyfriend was “beating her up” and trying to drive away with her 3-year-old daughter in her car.

The trio had been travelling from Phoenix on their way to New Mexico when her boyfriend, 28-year-old Raydaynold Al Yazzie from New Mexico, became upset during a stop in Cordes Junction.

The victim explained that when she attempted to exit the car to use the bathroom, Yazzie grabbed her hair and pulled her back into the car, climbing over her daughter to do so.

When the victim tried to leave again with her daughter, Yazzie grabbed her daughter’s legs and told her not to take the girl. Yazzie attempted to punch the victim, but she was eventually able to break free and get to a phone in the store.

Yazzie now had her daughter in his arms and kept walking in and out of the store telling the victim it was time to leave. While the victim was on the phone with a 911 operator, Yazzie walked over, took the phone from her, and disconnected the call. The victim demanded her daughter back and Yazzie complied.

Within 10 minutes of the victim’s call, a deputy arrived and stopped behind the suspect vehicle, his emergency lights activated. Instead of following the deputy’s orders, Yazzie got into the victim’s car, did a 3-point turn, and sped away. Deputies learned he had been drinking and using marijuana.

The deputy began pursing him as he eventually got onto Interstate 17 heading north and maintaining speeds well over 100 mph.

Deputies soon stopped pursuing Yazzie due to safety concerns. Deputies further north in the Camp Verde area saw the vehicle continue north on I-17 at more than 100 mph.

They followed in a non-pursuit mode for a short distance before losing sight of the vehicle. Updates on the suspect and vehicle were shared with area law enforcement agencies.

It was later reported that the suspect was spotted driving east on Interstate 40 and had fled from both the Flagstaff Police Department and Coconino County Sheriff’s Office (CCSO), still in the victim’s vehicle. Yazzie called the CCSO later that morning and offered to surrender. Deputies met him near the Twin Arrows Casino where he was arrested.

He was booked into the Coconino County jail on the following charges: Driving under the influence (DUI), DUI with blood alcohol content of .08 or more, fleeing from officer, theft – felony control property-motor vehicle parts, reckless driving and exceeding 85 mph. His bond is set at $25,000.

Yavapai County deputies will be filing local charges pending extradition to include unlawful flight from pursing law enforcement, vehicle theft, resisting arrest, assault per domestic violence, disorderly conduct and preventing use of phone in an emergency.

The victim, who was also pregnant, did not have her phone or any possessions and was unable to contact any family or friends. To insure her safety, a YCSO deputy drove her and her daughter back to their Phoenix apartment that morning.