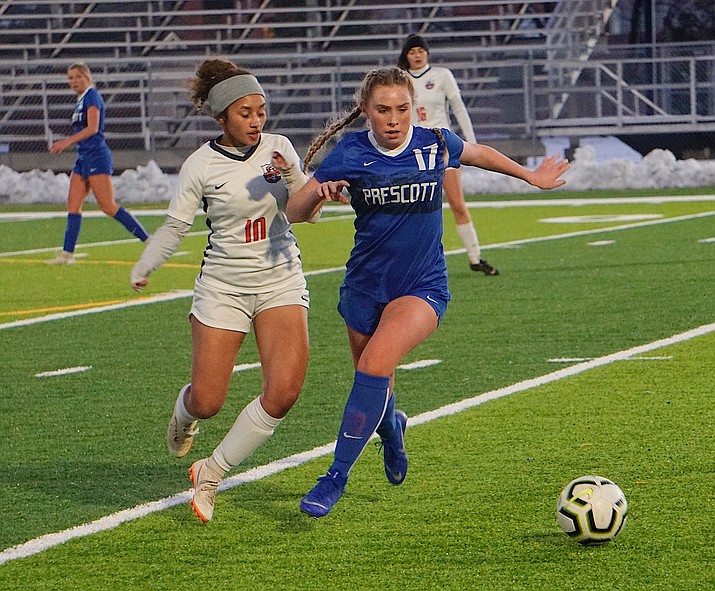 Prescott midfielder Ellie Magnett (17) holds off a defender during a game against Poston Butte on Friday, Jan. 10, 2020, at Bill Shepard Field in Prescott. (Aaron Valdez/Courier, file)

With the winter season past its midway point, Prescott girls soccer topped AIA’s 4A rankings that were released earlier this week, and deservedly so considering how dominant the team’s been thus far.

Usually, it gets lonely at the top but in this case, the Badgers are in good company as five teams from the Grand Canyon Region were ranked within the top 10. No. 4 Flagstaff, No. 5 Mingus, No. 7 Lee Williams and No. 9 Bradshaw Mountain are very capable of shaking things up but Prescott head coach Paul Campuzano said his girls should respond well to anything that comes their way.

“It’s nice because it excites the girls but it’s one thing to be No. 1 and another thing to stay No. 1,” Campuzano said. “The girls know that they can beat anyone on any given night and now they truly believe it … Really there’s no reason to fear or be any nervous or hesitant about playing anyone in the state.”

Prescott’s roster is stacked with talent from top to bottom as every player has played an important role, and it’s showed. In 10 games this season, the Badgers have shutout their opponent eight times, won by an average margin of four goals and have only given up three goals.

The Badgers already trounced No. 2 Arcadia 3-0 during the Chandler Prep Winter Classic back in December. They went on to win that tournament after beating Shadow Ridge 3-1 in the final.

“Our goal is to win the entire thing,” Campuzano said. “That’s the difference here since in the past, we had to rely on one outstanding striker … Now we have five, six players scoring and it’s just different because there’s no way to game plan for it now, which is nice.”

Prescott’s last outing was on Thursday where they triumphed 1-0 over Estrella Foothills on the road thanks to an Emma Alvarez goal. The Badgers will now switch gears to region play as they face off against Flagstaff on Thursday, Dec. 23, which will be another big road match. 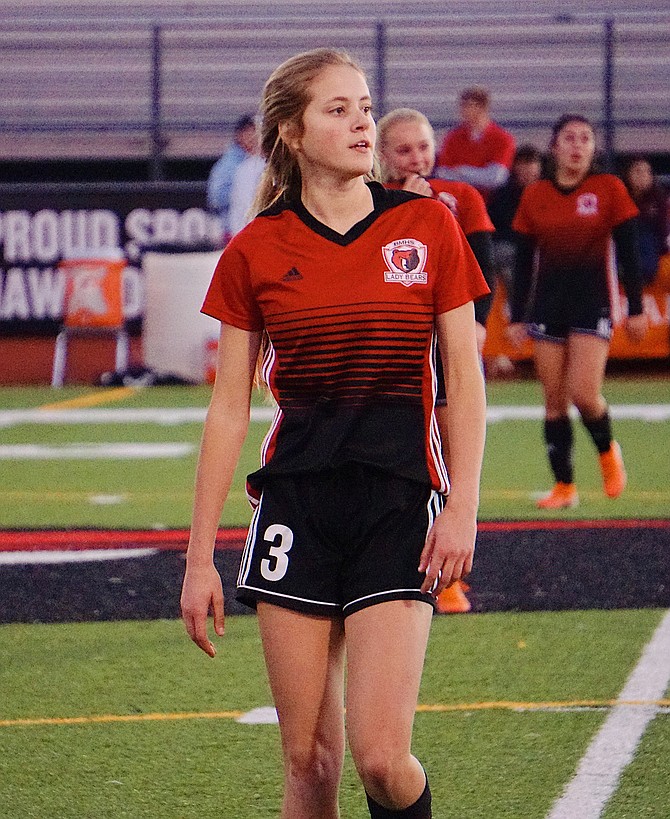 Bradshaw Mountain defender Abby Platt (3) looks on at the play during a game against Moon Valley on Thursday, Dec. 12, 2019, at Bob Pavlich Field in Prescott Valley. (Aaron Valdez/Courier, file)

Prescott’s cross-town rival hasn’t been too shabby either as Bradshaw Mountain sits in that No. 9 spot. After getting bopped 6-0 by Arcadia in their season opener, the Bears went on a six-game winning streak, which includes their latest 3-1 region victory over No. 25 Coconino on Thursday.

Bradshaw Mountain’s wins have all come against quality competition, including St. Mary’s, Cortez, Moon Valley, Cactus and Deer Valley. The Bears’ biggest margin of victory was against Moon Valley on Dec. 12 where they rattled off for a 6-0 shutout.

Despite the insane depth of the Grand Canyon Region, Sterling said he is confident the Bears can keep playing their game and possibly make some noise in the playoffs this season.

“We have to keep our confidence up and believe in ourselves and if the girls continue to believe that they’re capable of winning, then they’ll win. Pretty simple,” Sterling said.

In Thursday’s game against Coconino, the Bears jumped out to a good start even though they were without starters Sarah Hacker and Alexis Clynes due to injury. Bria Coleman stepped up very nicely for the Bears as she scored two first-half goals via penalty and a remarkable free kick from 30 yards out.

Coconino came out strong in the second half and caught the Bears snoozing to make it a 2-1 game. However, sophomore Alexis Lee, a first-year varsity player, put the game away with a goal of her own.

The Bears will return to Bob Pavlich Field to host Flagstaff on Tuesday, Dec. 21 in their biggest game of the season. Kickoff is set for 5 p.m.