Startups see a market in renting couches by the month 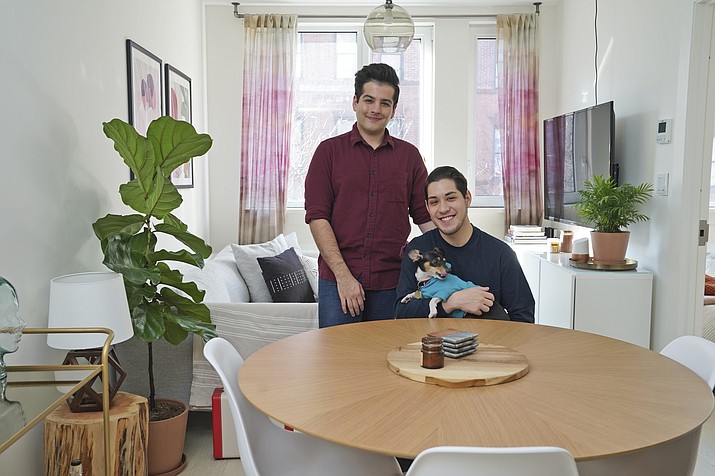 In this Monday, Nov. 25, 2019 photo, Zachariah Mohammed, left, Pete Mancilla, and their dog Remy pose for a picture in their apartment in New York. Most of the furniture in their apartment, including the couch, the table and chairs, the side table and the bar cart, are rented. Furniture-rental startups and other companies are aiming to rent furniture to millennials who don’t want to commit to big purchases or move heavy furniture and are willing to pay for the convenience. (Seth Wenig/AP, file)

NEW YORK — Zachariah Mohammed’s living room is filled with stuff he doesn’t own.

He pays $200 a month for the sofa, side table, bar cart, dining table and four chairs in his living room. It’s worth it, the 27-year-old New Yorker says. If he needs to move, which he’s done twice in the last 12 months, he won’t need to lug a sofa across the city or worry if it will fit in a new place. The furniture-rental startup, Feather, will swap out items for something else.

“We don’t want to be stuck with a giant couch,” says Mohammed, a social media manager at a software company, who lives with his partner and their dog, Remy.

Feather, Fernish and other companies aim to rent furniture to millennials who don’t want to commit to big purchases or move heavy furniture, and are willing to pay for the convenience. It’s part of a wave of rental culture that includes Rent the Runway, focused on women’s designer clothing, and even Netflix and Spotify, which let you stream from a huge catalog rather than buy individual TV show episodes, movies or songs.

“They’re moving a lot. They’re changing jobs a lot,” says Thomas Robertson, a marketing professor at the Wharton School of the University of Pennsylvania, describing the types of people who would use the services. “Why would you want to be saddled with furniture?”

The furniture-rental companies target high-income city dwellers who want a $1,100 orange love seat ($46 a month) or $980 leather bench ($41 a month) — but only temporarily. The furniture itself is a step up from Ikea.

“It was probably the first time my adult life that I felt like I was truly at home,” Park says. These startups are in just a handful of coastal cities, with few users, but seek to grow. They offer furniture from Crate & Barrel, West Elm and smaller brands.

Others are renting out home goods, too. Rent the Runway recently added West Elm pillows and quilts. Ikea is testing a rental service in several countries outside the U.S., including Switzerland and Belgium.

Renting may make sense for a generation that sees “life as transient,” says Hana Ben-Shabat, the founder of Gen Z Planet, a research and advisory firm that focuses on the generation born between the late 1990s and 2016.

For more on this story, visit dCourier.com.

Solutions and help for small-space living
Tips for living in a small space
Latest in pet furniture: pieces that fit a home’s decor
Furniture for all: IKEA founder Ingvar Kamprad dies at 91
Co-living becoming a popular solution to urban housing costs