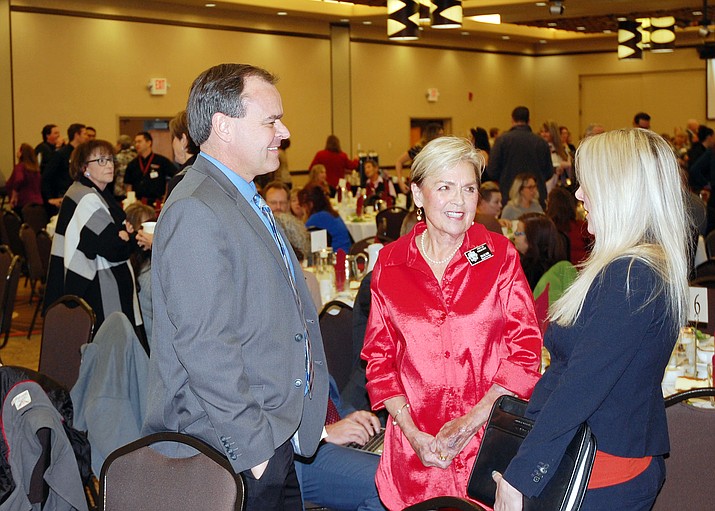 The 2020 Board of Directors was approved and the city was declared “a beacon of unity and teamwork” at the Prescott Chamber of Commerce’s annual meeting Thursday, Jan. 16.

The chairman’s gavel was passed from 2019 Board Chair Suzanne Springer, who could not attend, to 2020 Chairman Jamaal McCoy.

McCoy honored several attendees, including Harold Viehweg, who recently retired from the chamber staff after 27 years. Viehweg continues one day a week in the Visitor Information Center.

The keynote speaker, Mayor Greg Mengarelli said the city and chamber are an example for the country, “a beacon of unity and teamwork.”

He highlighted numerous projects and achievements over the past year, including paying the city’s PSPRS (Public Safety Personnel Retirement System) unfunded liability down from $86 million to $56 million, thanks to voters and Proposition 443. The proposition collects sales taxes that have enabled the city to make more than $30 million in additional payments. 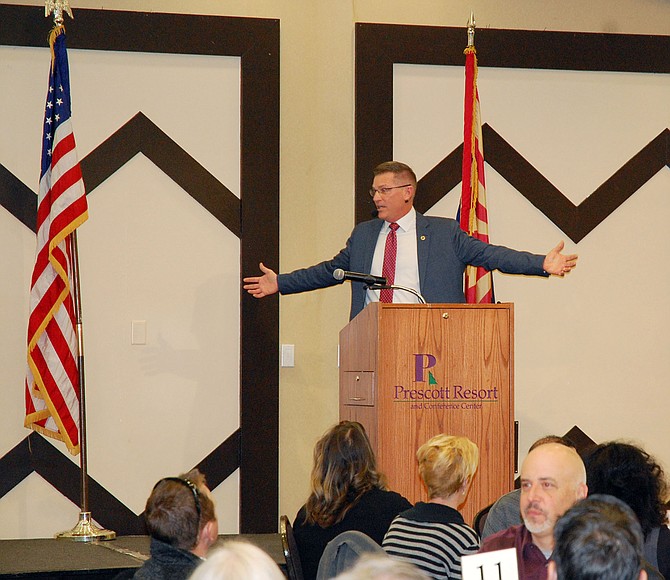 Prescott Mayor Greg Mengarelli, the keynote speaker at the Prescott Chamber of Commerce annual meeting Thursday, Jan. 16, 2020, at the Prescott Resort, talks about the city being a "beacon of unity and teamwork." (Tim Wiederaenders/Courier)

Mengarelli also touted airport improvements, including the new terminal work that is now under way; the need for a longer runway; progress on the Arizona Eco Development annexation talks; the Hilton Garden Inn at Sheldon and Montezuma streets; the cleanup of the Whiskey Row Alley; the Gateway Mall going from 40% vacancy to only nine empty retail spots; and bolstering the Fire and Police departments, among other topics.

He asked: “What makes Prescott a good place to live and work?” After calling on attendees to testify, he said people tend to forget what’s so great about the city. “We set aside differences … align with common goals … it is the Prescott way,” he said.

The event, which was at the Prescott Resort and Conference Center, was attended by more than 300 community and chamber members.