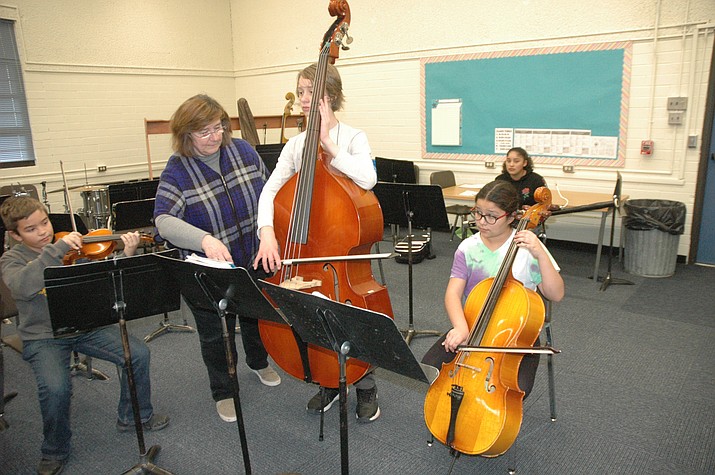 Luann Mueller, director of the Prescott Jr. Youth Symphony, giving instruction to Granite Mountain School students who have become a part of the new group, on Thursday, Jan. 9, 2020. (Jason Wheeler/Courier) 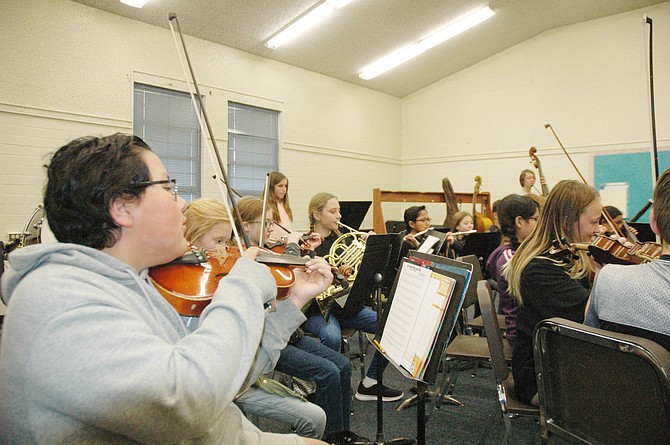 “As soon as I became involved with the musical community and saw the heart of Prescott, it was really clear that there was a desire for music with children, and because of the vibrant arts community here in Prescott, I thought ‘all right, let’s go in that direction,” Mueller said. “This year was the year.”

It seemed like there was a good window to do it now, she said.

Not only was the Prescott POPS Symphony wanting to have involvement in the educational community, but there were also other areas that had the same interests. It was the perfect time to get started.

They can do so by visiting www.prescottyouthsymphony.com where they can find out the history of the group, see who’s involved and what’s being planned as well as submit an application.

Mueller, who is directing the symphony, said she will get all the applications, go through them and contact the musician to make an appointment for a short audition.

Sixth through eighth grade students from all over can apply to be a part of the orchestra.

If they’re willing to come from Cottonwood or Paulden, they’re welcome to, she said.

“We want to involve the greater Prescott area,” Mueller said. “We want students from as far away as are willing to travel.”

Students may attend public or private schools or be home-schooled. Paid for through the Prescott POPS Orchestra, the Century 21 AZ Department of Education Grant and tax credit donations from the greater Prescott area, the Prescott Jr. Youth Symphony is free of charge for its first season.

Applications are due by Tuesday, Jan. 21. However, because it’s the group’s first year, and with the possibility that some will hear about it later than the deadline, she doesn’t want it to dissuade someone from applying, she said.

“Make the application and if there’s room in that section, we’ll contact them or put them on a wait list,” Mueller said. “We definitely want to include as many students as possible.”

Rehearsals will be from 3:15 to 5 p.m. Tuesdays beginning Jan. 28, and go through the concert, which is Thursday, May 14, at Granite Mountain School, 1800 Williamson Valley Road.

What makes the Prescott Jr. Youth Symphony unique, Mueller said, is the partnership with the Prescott POPS orchestra, which is providing all of the string teachers.

The first 50 minutes of rehearsals will be a sectional with a professional on their instrument and the second half will be a full rehearsal with the entire orchestra.

With 2020 being the group’s first year, success will be the group getting stronger, playing better music and having more experience. What she would like to see in four or five years is the involvement of a senior high symphony alongside the Prescott Jr. Youth Symphony.

“The idea is we’re getting a seed group, next year we’ll solidify and strengthen that. In about four years, these kids will have grown and they’ll be ready for both a Jr. Youth Symphony and a senior high symphony,” Mueller said. “Ultimately, and this is further down the road, we want to provide a strong pathway for these students who are interested in music to go on and be part of the Prescott community so that they’ll come back. Maybe they’ll go away to college but they’ll come back and they’ll say ‘I want to be in the Prescott POPS Orchestra’ or whatever kind of orchestras are going to be here.”

Sometimes, music students may have friends that are going in different directions and might not realize how special they are.

The Prescott Jr. Youth Symphony would give them a chance to discover likeminded students who love music to the point where they’re willing to stay home and practice for hours or are willing to compete and put themselves at risk for winning or losing a chair position.

When those kids of kids come together, they can do anything, she said.

Many larger cities have youth orchestras, Mueller said, noting she was involved with youth symphonies in Orlando, Atlanta and Baltimore.

All three of those places are big cities with strong music communities, she said.

“If you could take each one of those places and distill it into a small town, you would have Prescott,” Mueller said. “What’s exciting to me is to bring that experience and get it started here so that hey, when I’m not here, it still will be.”

For more information about the Prescott Jr. Youth Symphony, visit www.prescottyouthsymphony.com or contact Mueller at luan.mueller@prescottschools.com.