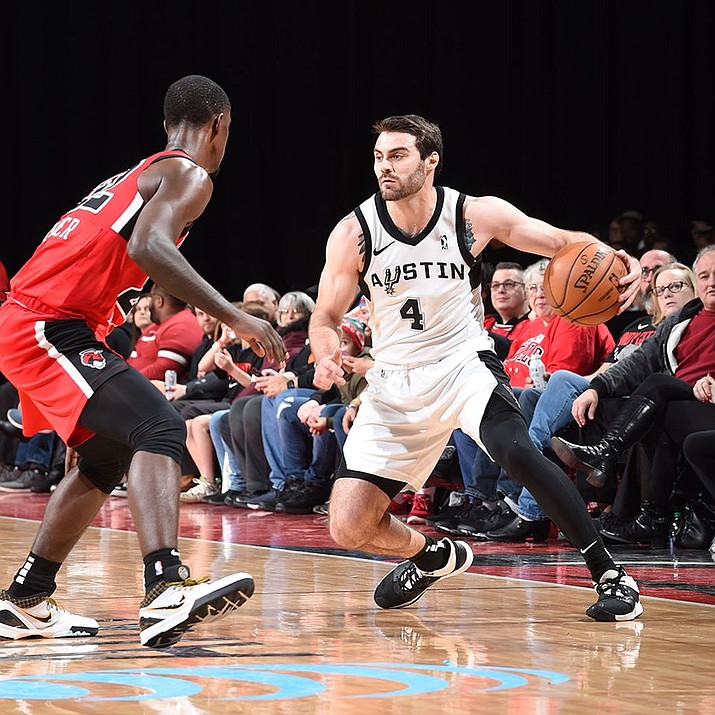 Matt Farrell (4) in a game with the Austin Spurs. (Northern Arizona Suns, Facebook/Courtesy)

PRESCOTT VALLEY — The Northern Arizona Suns announced today they have acquired guard Matt Farrell in a trade with the Austin Spurs, in exchange for the returning player rights to guard/forward Peter Jok.

In 2018-19, his rookie year with the Delaware Blue Coats, Farrell averaged 10.7 points, 6.2 assists and 3.3 rebounds in 45 games (17 starts). That season he tallied seven double-digit assist games, recording five double-doubles. League-wide, his 278 total assists were tied-ninth most in the league.

Farrell, 23, has played in the NBA Summer League the last two offseasons, first with the Miami Heat, and last summer with the Milwaukee Bucks. The Bridgewater, New Jersey, native played four years collegiately at Notre Dame. His best year came his senior season in 2017-18, in which he was named to the All-ACC Third Team after averaging 16.3 points, 5.5 assists and 2.4 rebounds in 31 games (all starts).

Owens has played this season with the Suns’ NBA G League affiliate, the Northern Arizona Suns, averaging 9.0 points on 55.0% shooting from the field and 82.8% from the free throw line plus 7.7 rebounds and 1.5 blocks in 24.3 minutes. Owens leads the NAZ Suns with five double-doubles for the season and ranks 12th in the G League in total blocks and 15th in total rebounds.

The 6-10, 205-pound forward was on the Suns’ roster during the preseason and at 2019 NBA Summer League in Las Vegas. A 24-year-old rookie out of Texas Tech University, Owens helped the Red Raiders to the school’s first-ever Final Four and a national runner-up finish in 2019. He set a Texas Tech single-season record with 92 blocked shots and earned selection to the Big 12 All-Defensive Team.

Owens will wear uniform No. 41 with the Suns. The Suns’ roster now stands at 17 players; an updated roster is attached.