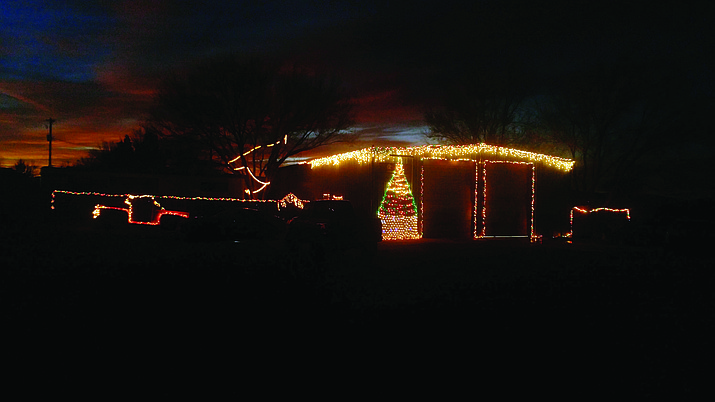 Looking back on the recently passed Christmas season, it was busy but rewarding, said Recreation Lead Dallas Gray.

“We definitely added a few things this year to our whole December to Remember, one of those things was our Christmas lighting contest,” Gray said. “It exceeded our expectations for the first year. I think that the potential to grow next year is way bigger than we had anticipated.”

The winner for the inaugural Chino Valley Business Christmas Light Contest was Myers Sandblasting & Painting. The first place prize was a business license from the Town of Chino Valley and a trophy, Gray said.

Everyone who entered the contest did a beautiful job and none of them were lackluster in their displays, she said. There were some complaints though with some of the competitors calling in to say they should have won instead because they did more work, said Recreation Coordinator Hailey Byrd. They called everyone on the 13th of December to say they were going out that night to check out the buildings, Byrd said.

“That’s the night we judged. We wanted to give them a heads up so they could make sure to have everything ready. Whether or not they still left those lights on after the judging was up to them,” she said. “It depends on what the committee liked.”

The sole purpose for doing things like the lighting contest is to bring people together and create new things for the residents to enjoy during whatever season it is, Gray said.

There was also CM Wireless’ Casa Toy Drive for the CASA for Kids program which was also a success, she said.

“We literally filled an entire trailer full of all new toys to be donated to those children in the foster care system,” Gray said. “We had Santa Claus and Mrs. Claus there taking pictures with kids, we had the Chino Valley Animal Shelter there and they were able to provide info for the needs of the shelter and animals that were adoptable, so they got a lot of exposure. In addition too, Boys and Girls Club were able to showcase their facility … everyone that came out got to kind of have a well-rounded, fun holiday time and they were also doing good for our community.”

The displays at Memory Park doubled from last year as well, she said. If that increase keeps up, the park will be full in a few years, Gray said.

As a whole, she thanked the Firefighter Angel Foundation who supplied a majority of the toys as well as the community of Chino Valley, mentioning a special request by someone who saw Santa which resulted in a lot of “Christmas elves” who came together to make the holiday happen.