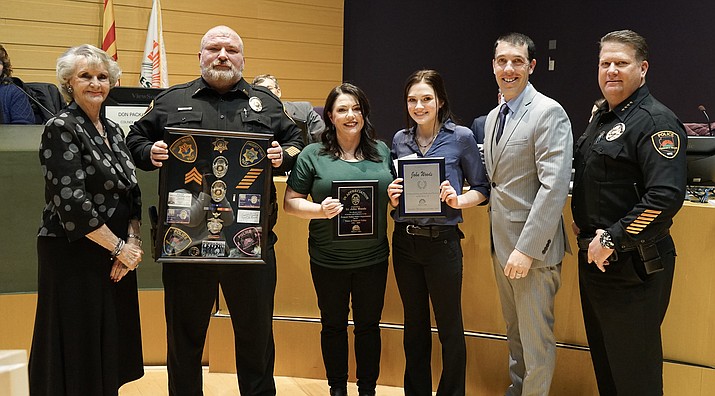 The Prescott Valley Town Council on Jan. 9 approved a rezone from residential to commercial for a 2-acre parcel adjacent to Kachina Mini Storage, 171 S. Highway 69 near Dewey, for an RV storage complex.

Kachina Mini Storage stands on the east side of Highway 69, about 500 feet north of Kachina Place.

Council also agreed to extend an agreement with Viewpoint Investors LLC through 2030 for possible future development of commercial properties south of the Viewpoint subdivision, including an extension of Pronghorn Ranch Parkway, from Viewpoint Drive heading west.

Community Development Director Richard Parker told Council that Viewpoint Investors may sell its properties after improvements have been made.

• Recognized retiring Prescott Valley Police Department (PVPD) Lt. John Woods for his 25 years of service by presenting him with a shadow box displaying the various badges and accolades he earned during his career.

Originally from Fargo, North Dakota, Woods began his career with PVPD in 1994. He has spent the last 10 years as a lieutenant, supervising each of the department’s divisions. Woods, who said he plans to stay in Prescott Valley, has a wife and two grown daughters.

“I thank the town; I love everything about this place,” Woods told Mayor Kell Palguta and council, which praised him for his service.

• Appointed Karen Rauls to the Library Board of Trustees; Zachary Moss to the Arts and Culture Commission; and James McIntyre and Charles Tatro to the Building Board of Appeals.

• Approved a reversionary plat combining three lots west of the Circle K at 8176 E. Highway 69 near Robert Road for a proposed restaurant.