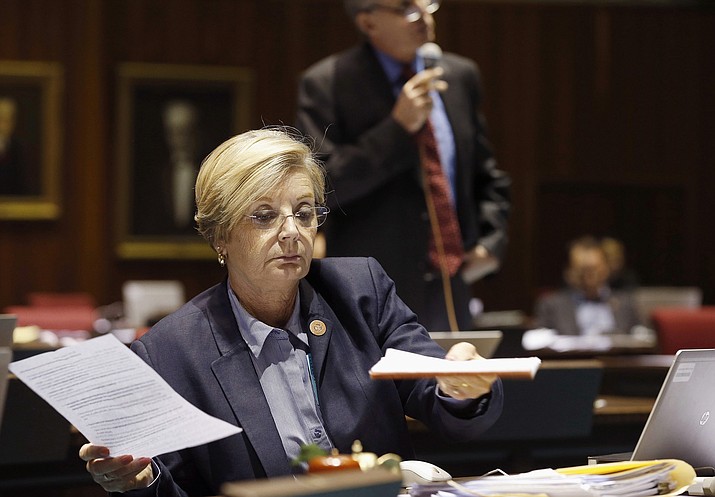 In this May 3, 2016, file photo Rep. Karen Fann, R-Prescott, goes over paperwork during budget deliberations at the Arizona Capitol in Phoenix. An Arizona Senate committee has delayed consideration of a contentious proposal from a conservative Republican lawmaker that would bar any sexual education instruction for students before 7th grade. (Ross D. Franklin/AP, file)

PHOENIX — An Arizona Senate committee has delayed consideration of a contentious proposal from a conservative Republican lawmaker that would bar any sexual education instruction for students before 7th grade.

Sen. Sylvia Allen's proposal was set for a hearing Tuesday afternoon but was unexpectedly scratched from the agenda of the Education Committee she chairs Monday evening. The proposal also boosts parental notification requirements and allows parents to sue if they're not happy with a school district's response to their concerns about a sex ed curriculum. It also requires a focus on minors abstaining from sex.

Senate President Karen Fann said Allen needs more time to hear from concerned parties and revise the proposal before it is heard in committee.

The proposal initially set off a firestorm of criticism because it barred even the mention of homosexuality, although Allen pulled that provision last week, saying it was being misinterpreted. The state Legislature repealed a 1991 law last year that had barred HIV and AIDS instruction that “promotes a homosexual lifestyle.”

Allen said her proposal is intended to give parents more access and transparency about sex education classes so they could make informed decisions about the health and welfare of their children.

Opponents call it unneeded in a state where parents already have to approve having their children take sex ed classes.

Two Democratic senators and a number of groups scheduled a news conference to voice opposition to Allen's proposal at noon on Tuesday.