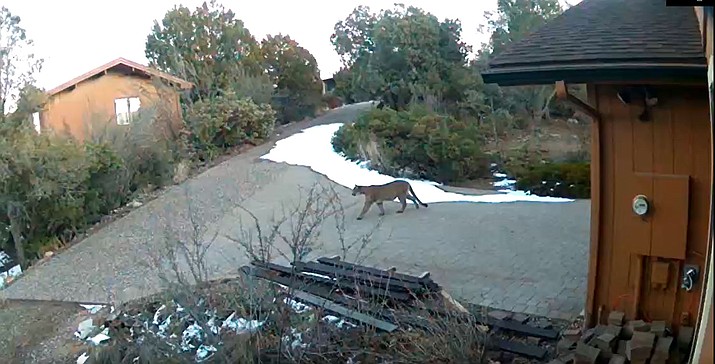 A mountain lion is caught on security camera footage walking through a driveway in front of a home in the Los Pinos development on the edge of Capital Canyon Golf Club on Sunday, Jan. 12, 2020. (Doug Anderson/Courtesy)

Mountain lion caught on camera in Prescott by Courier Video

A mountain lion made its way through a Prescott neighborhood and was caught on security camera footage in front of a house in the Los Pinos development near Capital Canyon Golf Club on Sunday afternoon.

"I put those cameras up six years ago and they pick up all kinds of other animals, but never a lion before," homeowner Doug Anderson told the Courier on Monday morning.

Anderson said the cameras have a motion detection option, so when the mountain lion walked across his driveway during its Sunday evening stroll at around 5:36 p.m., an email buzzed his phone.

"I was surprised to see it was a lion, not a deer or something, which is pretty common," Anderson said, adding he and his family were not home at the time.