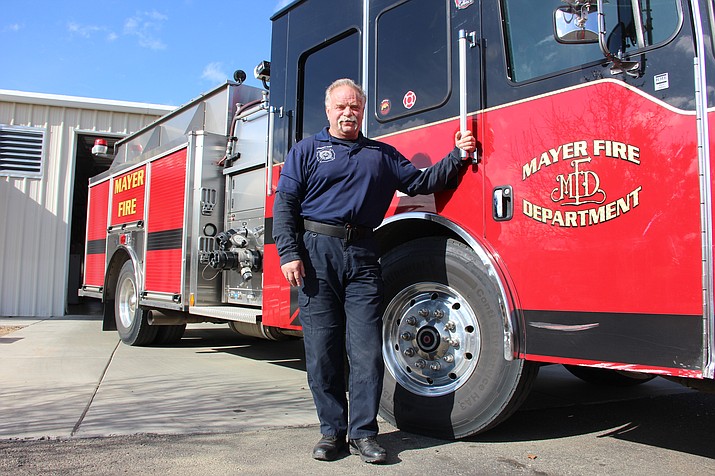 Mayer Fire Chief Mike McGhee anonymously donated a kidney in October 2019. He said it was something he was meant to do. (Max Efrein/Courier)

Mayer Fire Chief Mike McGhee was scrolling through Facebook one day when a post caught his eye.

It was a photo of a woman holding a sign that said she needed a kidney, and pleaded that people go to a website that pairs living kidney donors to compatible kidney recipients.

He tried scrolling past it like anything else, but found himself going back to it again and again.

“Finally I clicked on the link and it just gave me goosebumps,” McGhee said.

As he read about kidney donation, the 60-year-old realized it was something he was meant to do.

“I believe this was a calling from God,” McGhee said. “He put it in my heart.”

Approximately 12 people die every day waiting for a kidney transplant, according to the National Kidney Foundation.

As of January 2019, more than 124,000 people in the country need a lifesaving transplant, according to the Organ Procurement and Transplantation Network. Most of that need (83%) is for kidneys.

In most cases, organs that become available are those that have been donated after death.

Very rarely does someone decide to donate all or part of an organ while they are still alive, said Winnie Cascon, a clinical transplant coordinator with Banner-University Medical Center in Phoenix. 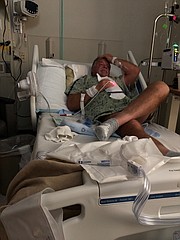 “Last year I think we only did two or three (living donor kidney transplants at Banner),” Cascon said. “Of course, no one wants to go through surgery if they don’t have to.”

Even more unusual is when that organ is donated to a stranger, rather than a relative, friend or significant other.

But that’s precisely what McGhee chose to do. Not knowing anyone in need of a kidney, he opted to donate anonymously to whoever he can help.

“I just thought it was the right thing to do when I saw how many people were in need,” he said.

Within 15 minutes of signing up to become a living kidney donor, McGhee was contacted by a woman who asked if he’d be willing to travel to Toledo, Ohio for some testing.

“They wanted to see if I’m healthy enough for it,” McGhee said.

He agreed, and so began what ended up being a year-long journey.

“I started my testing December of 2018 and it took until October of 2019 to have my surgery, so it was a long process,” he said.

At every step of the way, he had the opportunity to back out, but he was determined to follow through.

Since Yavapai Regional Medical Center doesn’t do transplants, he ended up having the procedure done at Banner-University Medical Center in Phoenix on Oct. 2.

As he was checking in to the hospital that morning, he coincidentally ran into the woman his kidney was destined for.

After an emotional meet, they got to share some of what brought them to that moment.

The woman, a Phoenix resident who McGhee believes is in her 60s, said she has an inherited disorder called Polycystic Kidney Disease. She had been on the wait list for a kidney for about 7 years and had been staying alive via dialysis.

“She couldn’t even cook food,” McGhee said. “That’s how sick she was.”

With McGhee’s kidney now inside her, she is no longer on dialysis and is living a much better quality of life, he said.

The Courier asked if the woman would be willing to talk about what she has gone through and what it means to have received a kidney from a complete stranger, but she chose not to comment.

“She’s just been through a lot and (would) rather remain anonymous,” McGhee said.

All major surgeries come with risks. McGhee knew that going in.

He also knew that having only one kidney can be somewhat limiting. For instance, it’s not recommended to drink too much alcohol, smoke too much tobacco, or consume too much sodium or potassium with only one kidney at work.

But none of that concerned him, and his recovery from the procedure was surprisingly quick.

“I had zero problems,” McGhee said. “It was almost too easy. I was like, ‘Why am I not hurting?’ It was just wonderful.”

McGhee was in the hospital for three days and was back to eating normally by day 5. On day 6, he voluntarily returned to work.

“I have enough sick time that I could have taken off a year,” he said. “If I didn’t feel well and thought I couldn’t work, I wouldn’t have did it.”

When McGhee decided to do this, he didn’t tell anyone except his immediate family and some coworkers.

“I normally try to stay out of the limelight,” he said.

After he returned from the hospital, his wife, Terri, decided to be the one to share the news. Without telling him, she posted about the year-long experience on Facebook.

When McGhee saw how positively people responded to the story, he was encouraged to be more open about what he went through in the hope that it would inspire others to do something similar.

“If people are thinking about it and decide to do it, it will bless their life,” McGhee said. “I really do believe that.”