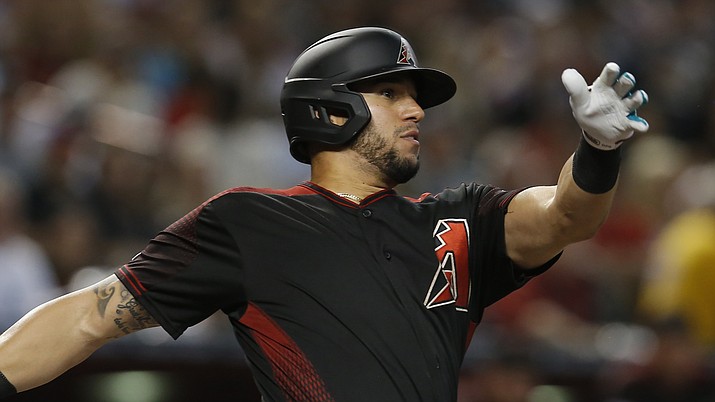 In this Aug. 17, 2019 file photo Arizona Diamondbacks' David Peralta hits against the San Francisco Giants in the first inning of a baseball game in Phoenix. The Diamondbacks have finalized a $22 million, three-year contract with Peralta that runs through 2022, Monday, Jan. 13, 2020. (Rick Scuteri/AP, file)

PHOENIX — David Peralta and the Arizona Diamondbacks have finalized a $22 million, three-year deal through 2022 that will keep the outfielder with the organization that signed him out of an independent league nearly seven years ago.

The 2019 Gold Glove Award winner in left field avoided his final year of salary arbitration by agreeing to the deal announced Monday. He will make $7 million during the upcoming season and $7.5 million in 2021 and 2022.

The 32-year-old has been a regular in the Diamondbacks outfield and in the middle of the batting order over the past few seasons. He played in 99 games last year, batting .275 with 12 homers despite battling a shoulder injury that bothered him for much of the year and eventually required season-ending surgery. He hit a career-high 30 homers in 2018.

The D-backs signed Peralta in 2013, finding him in the independent American Association, and he quickly developed into a major league-caliber hitter. Peralta was a pitcher early in his professional career, but was released by the St. Louis Cardinals in 2009 and made the switch to the outfield.

The Venezuelan said it was an easy decision to stay in Arizona instead of test the free agent market next winter.

“This is the team that gave me the opportunity when I was playing independent ball, the team that trusted me,” Peralta said. “Why not stay here? This is home for me. This is like my family and I was really happy when we got an agreement to stay here for a long time. This is where I want to be.”

Arizona general manager Mike Hazen said Peralta's drive to improve — both offensively and defensively — is a big reason the D-backs felt comfortable signing him to a multi-year deal despite last season's injury issues.

“He can run, he's a good athlete, and can impact the ball both for average and power, so that's the starting point,” Hazen said. “The work he does against righties is really, really good and that's a skill because the majority of the pitchers in the league are right-handed.”

Peralta should be the starter in left field this season while recently signed Kole Calhoun will likely be in right. Hazen has said he's still exploring options for center field, though Ketel Marte could man that role on a full-time basis after splitting time between center field, second base and shortstop last season.