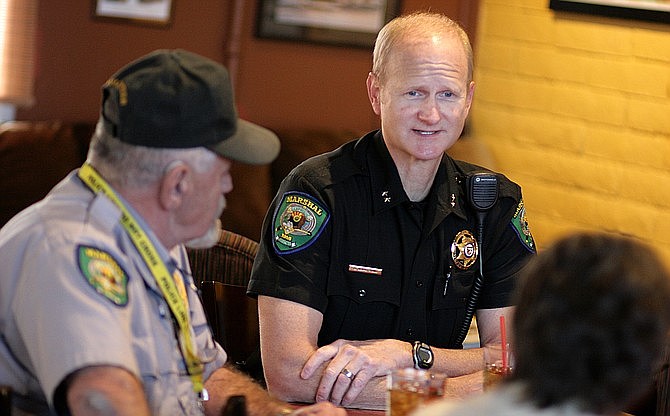 Commander Brian Armstrong said the trap, neuter, release program is expected to start in February and is designed solely for stray or feral cats. The program is not for dogs or for family pets. (Bill Helm/VVN)

While some cats can be domesticated, others are destined to roam free.

But stray and feral cats, regardless of their eventual home, can be spayed or neutered through the Camp Verde Marshal’s Office’s TNR program.

The grant was available thanks to sales and support of the Arizona Companion Animal Spay and Neuter Pet Friendly license plates.

According to Commander Brian Armstrong, the Marshal’s Office will promote the specialty license plates through Facebook posts and various media events to educate the public on the benefits of the program, but also on spaying and neutering for all cats and dogs.

The Pet Friendly license plate logo will be used on media releases and education pamphlets to spread awareness of the TNR program and inform how proceeds from purchasing the plates fund these programs, Armstrong also said.

The trap, neuter, release program, which Armstrong said is expected to start in February, is designed solely for stray or feral cats. The program is not for dogs or for family pets. But depending on the success of the program, Armstrong said that the Marshal’s Office “may be able to apply for further grant funding to expand the program to assist citizens to help defray spay/neuter costs of family cats.”

“In this first year (of the grant), we cannot do that by the grant rules,” Armstrong said.

Feral cats picked up by Camp Verde’s animal control unit will be trapped, then transported to Gary Pollock of Anasazi Veterinarian Clinic where they will be either spayed or neutered, given a rabies vaccination then ear- tipped so they can be identified as a TNR cat.

Treated cats will then be released back in the same area they were caught to reunite with their colony, Armstrong said.

“This helps prevent other males from moving into a colony if the trapped males were removed completely,” he said.

If kittens are caught that can be domesticated, they will be turned over to the Verde Valley Humane Society to be adopted out.

The same would be true if a friendly cat was captured that could be adopted, Armstrong also said. But true feral cats would be returned to where they were trapped.

“Numerous phone calls from concerned citizens” have come in to the Camp Verde Marshal’s Office from residents spotting “anywhere from 10 to 30 cats in their neighborhoods,” Camp Verde Animal Control Officer Allison Anthony wrote in the department’s grant application.

By implementing this program, Camp Verde would like to “control, and eventually eliminate, the overpopulation of cats through spaying and neutering,” Anthony wrote.

The town will identify and locate feral cats “by citizens calling to inform us of a colony, prior complaints about feral cats or locating colonies by regular neighborhood patrols,” Anthony wrote.

Trapping will be determined by the order of when the call came in and the size of the colony, the application stated. Once a colony is located and the decision has been made to trap there, the residents of the neighborhood will be notified about the Marshal’s Office’s TNR program and the procedures the department follows.

“This will allow the residents to separate their personal cats so they will not be trapped,” Anthony wrote.

The TNR team will take any stray, friendly, socialized cats captured and put them in a rescue for adoption or to be part of a working cat or barn cat program. In the event kittens are trapped, Anthony wrote that “every effort will be made to send them to an available rescue to be socialized and hopefully adopted as a pet.”

Traps will have a newspaper or absorbent lining at the bottom for cleaning purposes, and each will be equipped with a water and food bowl for post-surgery care.

According to Anthony, Camp Verde looks to spay or neuter 100 cats in the program’s first year. This goal, she stated, is a “very realistic and achievable number based on the ability of just one of our partner veterinarians to perform the surgeries.”

The Camp Verde Bugle is a sister publication of The Daily Courier.