All About Pets: Cold, snow and working dogs 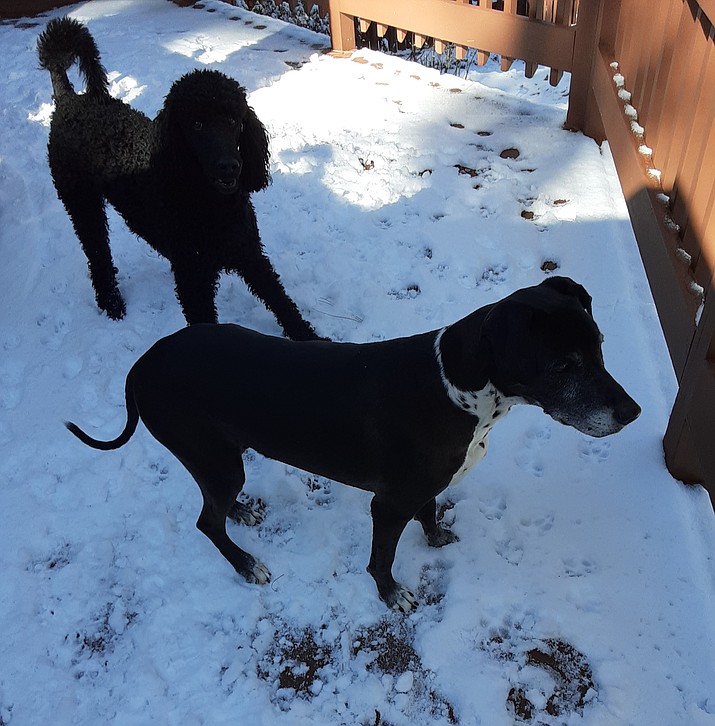 BoJay and Lacy are eager for their walk regardless of the snow and cold temps. (Christy Powers/Courtesy)

My goodness, how this month is moving along. I have yet to catch up. Hope not everyone but me has all their Christmas decorations put away! Plan to finish that task today.

I must take a step back and clarify a few things from last week’s column. First of all, I appreciate the notes I received from readers. I always love hearing from you. I was determined to comment about the wonderful column that appeared earlier in the Courier regarding the online registration of a beehive as a service animal. So many problems result from the severe lack of clear destinctions for a genuine service dog and the numerous problems that owners of service dogs have to suffer because of the ease in online registrations.

I was also most eager to share that my BoJay passed the initial testing to become a therapy dog, but I left out a few steps in the process toward his final certification. The process is ongoing.

There are several organizations that do testing and prepare dogs for different areas of working with people. Some groups prepare them for hospital work, some prepare them for work in schools, and there are dogs who volunteer in hospice facilities. There are so many wonderful opportunities.

BoJay and I are in, hopefully, the final steps of becoming a therapy dog team. First, I had to go through a background check to be sure that I was not a convicted criminal. Fortunately, I passed that one! Then BoJay was tested on his behavior around noises such as a wheelchair or walker and also, to see how he reacts around another dog. Several steps were involved in the testing process. Fortunately we passed that one.

There are a couple more steps: we had to submit a stool sample to make sure that he is not carrying any bacteria that could cause problems at facilities. He passed that one also. So now, hopefully, we are in the final stages and my boy can soon proudly wear the badge of a certified therapy dog.

There are so many ways that dogs and other pets provide comfort to people. Just heard from a couple where the wife has a little emotional support pup that makes such a difference in her ability to cope with the everyday stresses and struggles connected with her health issues.

I am not fully versed on the wide range of legally working dogs. My concern is primarily focused on people who pass their dogs off as something that they are not properly trained to be. And my concern stems from the problems that these untrained dogs cause for people who legitimately have a working service dog.

On a lighter note, there have been so many deer and javelina wandering through the area lately. And the other day, three coyotes were calmly walking along the road in front of my house. I would love to think that these coyotes did not have to rely on these beautiful deer for their sustenance. But it is a fact of life. We also had a mountain lion captured on film in a neighbor’s driveway. The big cats and the javelina do require that we are ever vigilant. Some have suggested that one carry some sort of air emitter which makes a noise that is frightening to a wild animal. The other handy thing is an animal deterrent spray which is effective within 10 feet. You just want to be careful that you avoid contact with your own or your pet’s eyes. You focus this toward the nose of the opposition.

It can be a bit chilly these days, but if we bundle up, a walk is still enjoyable and healthy for our pets and for us. Just watch for ice.

Christy Powers is a freelance writer whose passion is studying and writing about pet health, nutrition and training. She can be reached at cpowerspak@gmail.com.