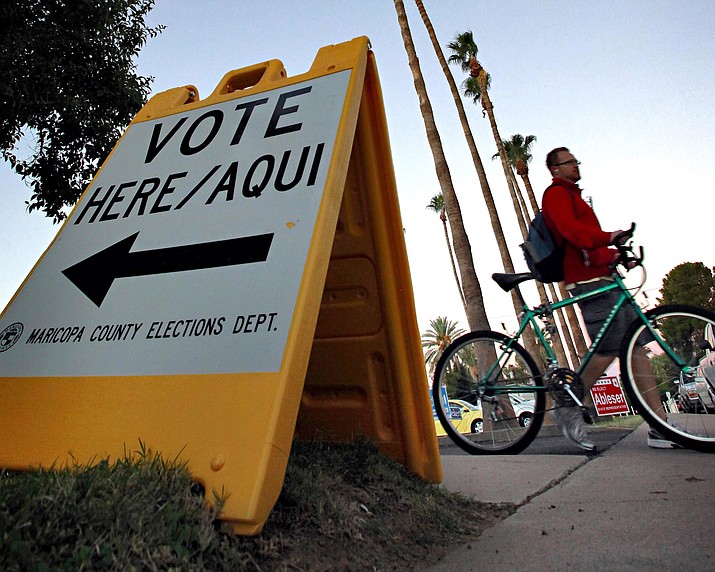 State officials have agreed to alter procedures to ensure that Arizonans who change address aren’t turned away at the polls because their voter registrations have not been updated. (AP file)

PHOENIX — State officials have agreed to alter procedures to ensure that Arizonans who change address aren’t turned away at the polls because their voter registrations have not been updated.

The deal requires the Department of Transportation and the Secretary of State’s Office to revamp the procedures used when someone shows up at an ADOT office to update an address. Put simply, any change of address for a driver’s license will automatically update the voter registration records unless the motorist opts out.

That same procedure will occur for online address changes.

Potentially more significant, any driver who changes addresses with ADOT who is not already registered to vote will be asked to sign up. And in cases of online changes, the motorist actually will have to say that he or she does not want to register to keep that from happening automatically.

Attorney Sarah Brannon of the American Civil Liberties Union acknowledged that part of the agreement by the state to do that actually is more than the original lawsuit sought. It instead was focused on those already registered to vote.

But Brannon said it’s consistent with what is required under federal law.

Petra Falcon of Promise Arizona, one of the groups that filed the lawsuit, said the agreement is crucial to ensuring that people who have moved get to exercise their right to vote.

“I’m expecting my early ballot to come in,’’ she said.

“If it doesn’t show up, I’m not going to get my ballot,’’ Falcon continued. “I may not even be registered to vote anymore.’’

Until now, a motorist had to affirmatively ask that the change also be reflected on voter registration rolls. The result, according to the 2018 lawsuit filed in federal court, was that about 384,000 registered voters who updated their addresses with ADOT since the 2016 election were still registered to vote at their old addresses.

The lawsuit charged that violates federal voting laws. More to the point, it also meant that many people were likely to show up at the wrong polling place and were turned away.

The settlement filed Monday in federal court spells out that any change in address for a driver’s license “shall serve to update the customer’s voter registration record or register the customer to vote’’ unless the person says she or he does not want to do that.

There is a similar requirement for those who change addresses on ADOT websites, registering the person to vote or updating the voting files.

More practically, it requires ADOT to update its computer database to specifically allow for electronic transmission of the complete voter registration information, including any change of address, to the Secretary of State’s Office.

That upgrade apparently already was in the works when the deal was filed in court on Monday, with an expected completion date of the end of this month.

At the heart of the issue is the National Voter Registration Act which is designed to make it easier for people to register to vote.

A key provision says that any change of address form submitted to the state for driver’s licenses “shall serve as notification of change of address for voter registration.’’ Only if the person says he or she does not want to change voting address does the mandate not apply.

That language is designed to ensure that the person can vote when he or she goes to the polls near a new address.

It also eliminates the problem that someone who has signed up for an early ballot will not get it, as these ballots are sent out in non-forwardable mail.

In a preliminary ruling in September 2018, U.S. District Court Judge James Teilborg acknowledged that the system in place at the time at ADOT for address changes for driver’s licenses required people to affirmatively “opt-in’’ to also having their voter information updated — directly contrary to the terms of the NVRA.

But the judge at that time declined to order the state to immediately make the changes, saying to do that so close to the November election would cause chaos.

That led to the negotiations that resulted in the deal filed Monday with the court.

Brannon stressed that nothing in the agreement alters existing Arizona laws that in most cases requires proof of citizenship before someone can register to vote.

The only exception is for those who vote only in federal races who are entitled under a separate federal law to instead only avow, under penalty of perjury, that they are eligible to cast a ballot.