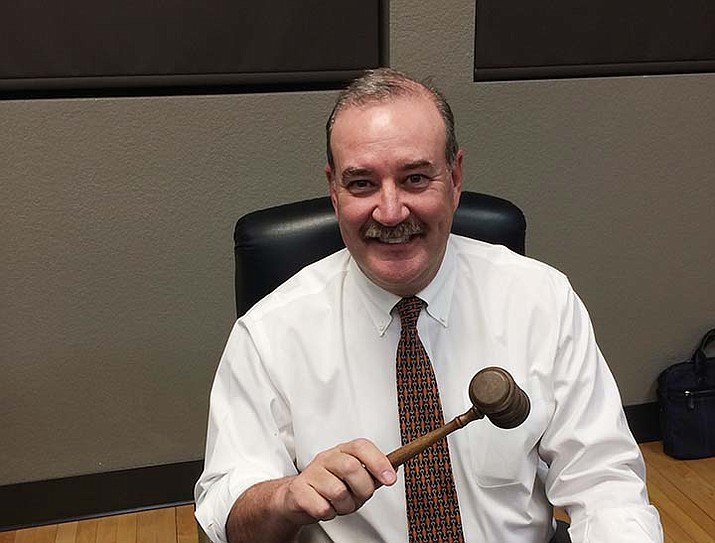 Scott Hicks takes over as PUSD board president for the year, shifting seats next to District Superintendent Joe Howard and his predecessor president, Tina Seeley. (Nanci Hutson/Courier)

Dr. Scott Hicks is no stranger to the Prescott community — he is from a multi-generational Prescott family with deep civic roots and, for over a quarter century, has worked in the family dental business.

A father of two young adult sons with wife, Christina, the Hicks’ eldest, Charles, is a Prescott High alum and their youngest, Colin, will graduate in May.

Committed to and concerned about offering the best education to students in this community, Hicks is in the final year of his second, four-year term on the Prescott Unified Governing Board. On Tuesday night, Jan. 7, the fourth-generation dentist who runs the Hicks Dental Group with his brother, Paul, was elected 3-0 as board president, the second time in what is a year-long role. Board members Deb Dillon and John Mackin were absent. Dillon was elected as vice president.

Hicks succeeds veteran board member Tina Seeley as board president. Seeley received an appreciation certification during the meeting for her service.

“I’ve enjoyed my last seven years. I feel it’s important for the community to give back,” said Hicks, who earned his dental degree at the University of Southern California where Dr. Taylor Hicks Sr. earned his degree back in 1933.

The senior Hicks was active in civic affairs for more than 50 years, serving as mayor as well as on local and state school boards. The existing Taylor Hicks Elementary was named in his honor.

In the coming year on the board, the younger Hicks said he looks forward to increasing educational opportunities for all students and considering budget priorities that reflect current student needs. An early spring retreat will be scheduled to review budget priorities, review and revise the strategic plan and consider board goals and operation procedures.

Hicks opted to run for office seven years ago because he had concerns about the district’s financial priorities, with the district at that time wrestling with severe budget deficits. He said he proud to say over his tenure he has witnessed progress in many areas.

Hicks has played a lead role in building strong ties between the schools, administration and the board despite such controversial actions as closing and selling school buildings and reconfiguring the remaining schools and grade structure. A former Badger football player, Hicks is still a devout fan.

“We have a very strong school district, but there is always room for improvement,” said Hicks of the district’s willingness to strive in everything it does to be “The Best” for each and every child who walks through its doors.

A humble, yet intelligent man unafraid to ask questions and seek clarification about how programs work and operate for the benefit of students, Hicks is well-respected by his board colleagues and school administrators. In his tenure, the board was honored with the highest award given to governing boards by the Arizona School Board Association: the Lou Ella Kleinz Excellence in Governance Award.

“He is a thoughtful caring father, businessman and alumnus who cares deeply about this community,” Howard said.

In his early tenure, Howard said Hicks was the board president. In that role, Howard said he offered great support and advice that helped him “learn the ropes.”

“I’m excited to spend more time with him and watch him lead,” Howard concluded.