2020 legislative session’s focus mostly on money; is surplus recurring and who gets it?
Some want more money to go toward education, reducing taxes 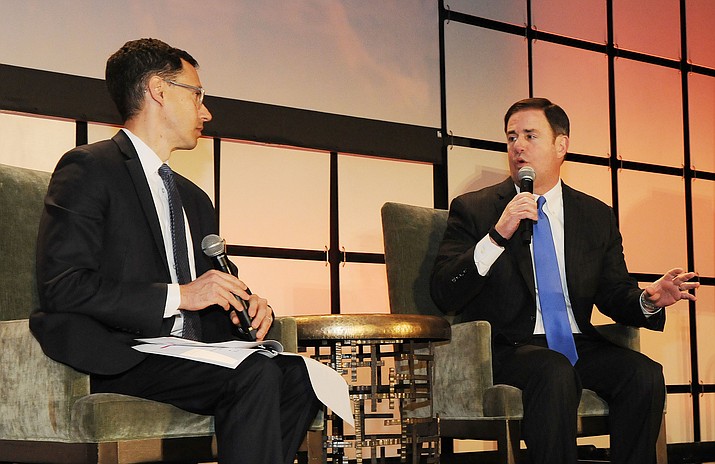 State lawmakers return to the Capitol Monday to deal with something they appear to have plenty: Money and who gets it.

PHOENIX — State lawmakers return to the Capitol Monday to deal with something they appear to have plenty: Money and who gets it.

State tax collections have been running ahead of projections made when lawmakers adopted the $11.8 billion spending plan for the fiscal year that began on July 1. Projections suggest the state could end the fiscal year this coming June 30 with an extra $750 million or more, perhaps even approaching $1 billion.

That’s money available for lawmakers to spend next budget year — or to permanently cut taxes as some are proposing. And that doesn’t even take into account future collections.

Any discussion will have to include more than how much there is. The more important issue is how much of that surplus is likely to recur in future years.

Sen. J.D. Mesnard, R-Chandler, said the issue is simple: Don’t commit money now for projects and programs unless you’re sure the money will continue to be there.

“Last I had heard, 30-ish percent, maybe 25 percent of the surplus is considered ongoing,’’ said Mesnard, who chairs the Senate Finance Committee. “So we want to make sure that’s the pot that we’re commit ourselves into the future or to cut taxes in some sort of permanent way.’’

The balance, he said, is one-time money. “We can invest that in roads and one-time projects that are hugely helpful to our state but don’t commit us to some long-term obligation,’’ Mesnard said.

That latter category is going to cover a lot of wish-list projects.

Consider, for example, the $20 million that Rep. David Cook, R-Globe, wants for a bridge over Tonto Creek if a request for federal dollars comes up empty. Fund it once and it’s done.

2020 Arizona Legislature by the numbers

This year — 31 Republicans and 29 Democrats

Two years ago — 35 Republicans and 25 Democrats

This year — 17 Republicans and 13 Democrats

Two years ago — 17 Republicans and 13 Democrats

• Deadline for adjourning this year (Saturday the week of the 100th day, counting Saturdays and Sundays) — April 25

• Number of bills introduced last regular session (not including miscellaneous resolutions and memorials) — 1,318

Others have their own pet projects. Rep. T.J. Shope, R-Coolidge, wants the state to widen Interstate 10 from south of Phoenix into Pinal County. Shope said there is no reason for that 26-mile section to remain two lanes in each direction when everything on either side is three lanes.

But the price tag on that could reach $500 million.

Rep. Ben Toma, R-Peoria, is focused largely on the other pot of money, the surplus that is likely to continue.

There likely will be a push to put additional dollars into K-12 education.

Toma, for his part, has a specific target in mind: accelerate restoration of what’s called “district additional assistance.’’

That is a special allocation of state dollars to schools to pay for things such as computers, books and buses. Only thing is, lawmakers seeking to balance the budget have failed to fund it for years, including $117 million cut by Ducey his first year in office.

The governor has committed to restoration of the full $372 million — but not until the 2022-23 fiscal year. Toma said that, given the state’s current financial condition, there’s no reason to wait that long.

House Minority Leader Charlene Fernandez, D-Yuma, said that’s a start. But she doesn’t believe that goes far enough given the cuts to public education since before the Great Recession.

Consider: In the 2007-08 school year the state put $5.2 billion into K-12 education. Legislative budget staffers estimate the figure for this year at $6.5 billion.

Sens. Sylvia Allen, R-Snowflake, and Kate Brophy McGee, R-Phoenix, want to put a measure on the 2020 ballot to increase the existing 0.6-cent state sales tax for education to a full penny, a move that could bring in an additional $550 million to $600 million a year.

“I think that’s the sweet spot,’’ Brophy McGee said, saying that’s a number that the public is likely willing to accept. The trick, however, is getting her colleagues to agree to put it to voters.

The money raised would not just be for K-12.

Lawmakers from both parties say state aid to community colleges has not kept pace. In fact, the systems in Maricopa and Pima counties get no state aid at all, though there has been funding for special programs.

And then there is the university system where the state’s share of the cost of tuition for Arizona residents has dropped from about 75% to just half that.

“And we wonder why tuition has gone up,’’ Fernandez said.

Voters actually may get a choice of funding measures.

Others groups are crafting a plan to boost income taxes on the most wealthy under the premise that sales taxes are regressive — the poor pay a higher percentage of their income than the rich — and the simple political fact that it could be crafted so the higher tax rates kick in only at higher incomes, leaving most voters unaffected.

There are some other education-related issues that may not have financial impact, including adding even more cash for counselors and providing more dollars to the state Department of Education to investigate misconduct allegations against teachers.

But the debate about the cash is about more than how to spend it.

Toma said that a newly imposed sales tax on internet purchases — the result of a U.S. Supreme Court ruling in a case called South Dakota v. Wayfair — is bringing in more than anticipated. So he wants to give some of that back.

“We should be looking at additional relief for the taxpayers because none of the Wayfair decision was intended as a massive increase in income to the government, at least not on the state tax,’’ he said.

His choice for where to cut? “I will tell you that my least favorite tax is the property tax,’’ Toma said.

“And the reason for that is I really feel that’s a hidden tax, that people don’t feel,’’ he explained. “They feel it, but they don’t really realize that they’re getting pummeled, if you will.”

Business property used to be assessed for tax purposes at 25% of “full cash value,’’ essentially a rough approximation of market value. Prior tax cuts have taken that to 18%.

The plan would trim that again.

But the problem is that lowering taxes for one type of property increases the burden for others — including homeowners. And that has political implications: homeowners vote, businesses do not.

Mesnard envisions the state using some of its surplus to make up the difference so the tax bill on homeowners does not go up.

That maneuver, coupled with other changes in the Mesnard plan, could trim state revenues by $400 million a year by the time it is fully implemented.

“A tax cut? That’s not one of the things that’s on the table for us,’’ she said.

Fernandez said lawmakers cut taxes by about $325 million last year with changes to things like the standard deduction on income taxes, a new tax credit of $100 per child and lowering the tax rates for those earning more than $26,500 a year.

Republicans justified the move as simply making up for the fact that changes in federal tax law increased the state tax liability for many Arizonans. The tax cuts, they said, avoided a “windfall’’ for the state.

Fernandez said her constituents and “stakeholders’’ — those who provide and depend on government programs — had a different take: “That last tax cut, I think it equaled $12 per person per year.”

“They would rather have a significant investment they could see,’’ Fernandez continued. “And that would be in public education and/or infrastructure.”