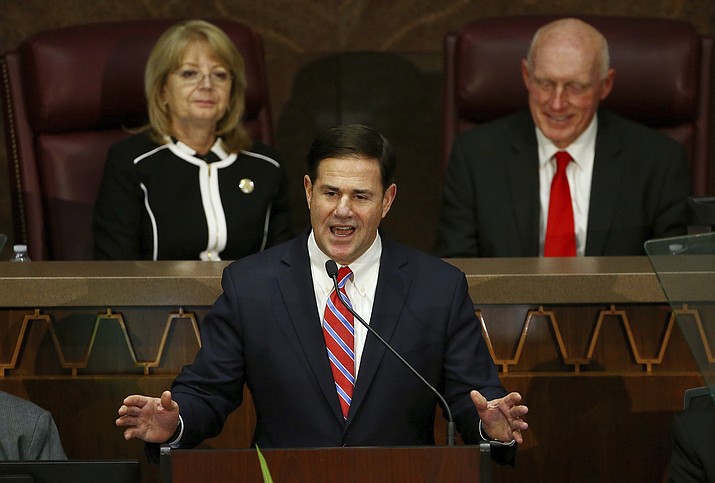 In this Jan. 14, 2019 photo, Arizona Republican Gov. Doug Ducey, center, speaks during his state of the state address as Senate President Karen Fann, R-Prescott, left, and House Speaker Rusty Bowers, R-Mesa, right, listen in Phoenix. Ducey will give his 2020 state of the state on Monday, Jan. 13, 2020, and is expected to focus on individual tax cuts. (Ross D. Franklin/AP, File)

On Monday, Jan. 13, the Arizona Legislature will convene into its 2020 session and, while water and budget issues will take center stage, dozens of other issues already are vying for attention. Here are some of them:

At or near the top of the list is the question of sex education: who should get it and what students should be taught. We agree with House Speaker Rusty Bowers, R-Mesa, who says that schools “are grooming children to be sexualized.”

Current law makes sex education optional, with parents having to opt in for their children to be enrolled. But Rep. Pamela Powers Hannley, D-Tucson, proposes to reverse that with a presumption that children get sex ed unless the parents opt out.

Opting in is more important; opting out can get lost in the shuffle.

Sen. Sylvia Allen, R-Snowflake, wants to prohibit sex education before the seventh grade. That is in line with the results of a survey by the Center for Arizona Policy that found 47% of parents want to outlaw sex ed through sixth grade.

Children, as young as kindergarten age, do not need to be taught “increasingly graphic and explicit” curriculum.

The debate here starts with whether Arizona will prohibit insurance companies from refusing to provide health coverage for those with preexisting conditions.

That’s a key requirement of the federal Affordable Care Act. But Republicans from several states, including Arizona, are asking judges to void the remaining provisions of that law.

While this will depend upon whether the mandate goes away and there is nothing to replace it, Attorney General Mark Brnovich and Sen. J.D. Mesnard, both Republicans, are crafting language they say would kick in should the federal law be voided.

We support protecting the right to be insured even with a preexisting condition. We can’t allow insurance companies to refuse treatments again. That was a terrible injustice to so many people in the past.

And then there is the renewed debate over vaping. Some of what was at the center of the past year’s battles may no longer be an issue now that the U.S. Food and Drug Administration has set the minimum age for tobacco use to 21 and banned most flavored products. What remains to be seen, however, whether the federal law is, in fact, enforceable.

The big fights here will be over who should be behind bars and for how long.

There are currently more than 42,000 people in the custody of the Department of Corrections, with that agency eating up close to 10% of the state’s $11.8 billion budget. That has some legislators from both parties reviewing everything from mandatory sentencing laws to whether to allow early release of inmates who complete counseling and drug treatment.

Among the bills being proposed is one that The Daily Courier has spearheaded through its #StopFentanylNow series, in the wake of two young men’s deaths in Prescott Valley and scores more across the state. The bill’s focus is the drug dealers, requiring mandatory sentencing like that of dealers of methamphetamines.

If we are going to put people behind bars, it should include those who sell deadly drugs such as illegal street fentanyl-laced mimic pills that are like bullets in a gun.

Less clear is whether Gov. Doug Ducey will have any better luck this year with his Safe Arizona Schools plan. The Legislature already has provided more money for counselors and safety officers; but, Ducey has had no luck in enacting a seizure of weapons in certain circumstances.

That would allow not only police but also family members and others to seek a court order to have law enforcement take an individual’s weapons while he or she is locked up for a mental evaluation. Ducey has called that “the one tool that could have eliminated the mass shootings” in our country.

The plan is viable but treads on thin ice. It has stalled amid opposition from those who say it infringes on constitutional rights and lacks due-process protections.

The focus here is likely to be over vacation rentals, specifically how much authority local governments can exercise. A 2016 law stripped cities of any oversight based on the premise these regulations interfered with the property rights. What has developed has been quite different, with investors buying up homes and condos solely for the purpose of creating what some say are unregulated hotels.

Other legislation exists that we will be tracking this session as well including: a bid by lawmakers to raise their own daily allowances, a move that comes after voters have repeatedly refused to raise their $24,000 a year salaries; making it easier for county supervisors to fire other elected county officials; imposing new restrictions on the ability of groups to propose their own laws and constitutional amendments; and allowing – or prohibiting – individuals to list the gender with which they identify on driver’s licenses and other state-issued ID cards.

Watch for our coverage; some bills seems so simple, and others are deep in understanding. Certainly, it will be interesting.