U.S. VETS Prescott seeks to be developer of VA ‘enhanced use lease’ project for homeless veterans 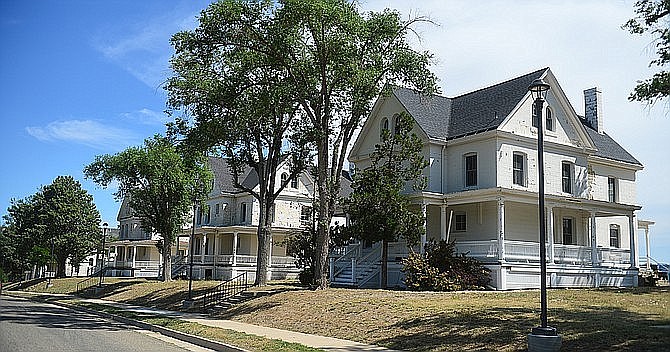 U.S. VETS Prescott is vying to be the agency selected restore and renovate a row of former officer headquarters on the local VA campus into housing for senior veterans.

Teaming up with a Phoenix-branch affordable housing developer, Gorman USA, U.S. VETS Prescott Executive Director Carole Benedict said her agency submitted a request to federal VA officials for what she expects would be a more than $10 million project. The deadline for all developer applications was 8 a.m. Friday, Jan. 10.

In June last year, following a favorable public hearing, federal VA officials started the process for what nationally is known as an “enhanced use lease” for the six of 11 former, Victorian-style officer quarters on the historic Fort Whipple grounds on the north side of the existing VA campus off Highway 89.

Under this arrangement, the VA leases the land to a developer for up to 75 years. In return, the developer agrees to the construction, maintenance and management of the complex as supportive housing for homeless, or near homeless, veterans and veteran couples.

The federal VA criteria in its “request for qualification” from all developers was the ability to build at least 40 units of housing between renovations of the existing houses and new construction on an adjacent three-acre lot. Benedict, though, said it might be that twice that number is possible. Such construction details, though, will not be determined until after the federal VA officials picks its final choice, she said.

U.S. VETS proposal is a 51/49 percent co-development, tax-credit funded project between the nonprofit and Gorman, with U.S. VETS to provide all the management and support services to veterans, Benedict said. In time, U.S. VETS’ expectation would be to buy out Gorman’s investment, she said.

VA officials did not know on Friday how many proposals were received. Benedict said her agency was contacted by at least a couple of other national developers. Prescott VA Chief Engineer Terry Boyd previously stated he was giving tours to several that expressed interest in the houses.

As for why U.S. VETS Prescott opted to bid for this project, Benedict said it simply makes sense given their 17-year track record of providing transitional and supportive housing to veterans in this community.

“I am proud of the work we do, and I think we are best suited to make sure our vets are getting what they need,” Benedict said.

This month, U.S. VETS will open its $9.5 million new headquarters and housing complex called Liberty Pointe on Whipple Street, another partnership project with a private developer, Bridgepointe Communities LLC. That project will include the existing 72-bed transitional living program as well as 15 transition-in-place apartments and another 20 studio apartments for other homeless or at-risk veterans.

Benedict sees the VA project as a natural progression, particularly as their proposal would be to serve more senior veterans who would most benefit from more centralized care.

She said she does not mean to sound arrogant, but her agency is “poised” to do the work and has “built a “reputation to do a good job there.”

“Why would someone else be selected to come in and serve veterans, the same thing we are already doing?” Benedict queried.

Her hope is federal VA authorities see it her way.

Local VA officials said they have a limited role in the selection process.

“We’re keeping our fingers crossed,” Benedict said. “It is a very competitive process.”